Welcome back!  How are you?  Things are going well here at the moment.  I had the chance to meet legendary baseball pitcher Luis Tiant at a book signing event for his new autobiography last night.  That was fun.  He was funny while he was talking to the crowd, and then he did a good job of being nice to everyone who got their books signed while recognizing that he had to keep the line moving, or else we all would have been there for six hours.  Looks like BDH and Little Buddha have something to read while I do some work in the garden.  However, let's check out today's headlines first.  The guys say the coffee is ready, so grab yourself a nice medium DD, because it's time to clear out some Wednesday Clutter.

All eyes will be on Robert Mueller as he testifies before the House Judiciary and Intelligence Committees today. The goal for Democrats should be to force Speaker Pelosi to do her job and to hold Donald Trump accountable after they publicly lay out the case for impeachment hearings to begin immediately.  America needs to hear once and for all directly from Mueller that his report did not exonerate Donald Trump, despite Trump's repeated lies to the contrary.  It is obvious that Donald Trump has been abusing his office for two years.  Democratic "leadership" can no longer whistle past the graveyard and continue to allow those misdeeds to go unchecked.  We expect Republicans to spend the entire day finding different ways to attack Hillary Clinton.

The Trump administration is looking to deny food stamps to 3.1 million people, claiming the government can't afford it.  The Trump tax cut was a $2.3 trillion giveaway to the wealthy.  We can afford to help poor people in this country.

The U.S. Senate approved a bill to extend the September 11th Victim Compensation Fund until 2090 yesterday. The final vote as 97-2, with only Senators Rand Paul and Mike Lee disgracing themselves.  The House has already approved the bill, and Donald Trump is expected to sign it into law.  Cheers to Jon Stewart for his never-ending advocacy on behalf of these heroes.   We need Stewart to return to a more regular role in this country's public affairs. 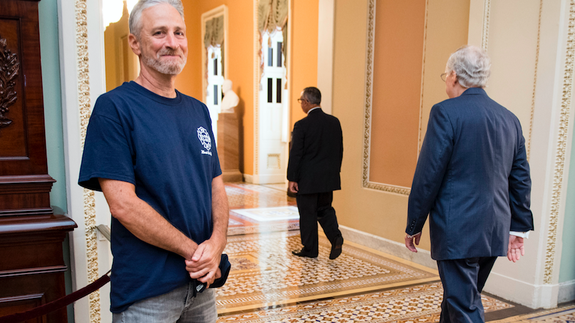 One of these men is a leader.  The other is Mitch McConnell.  (pic via yahoo.com)

We bought Clutter Headquarters years ago.  It remains one of the best decisions we've ever made for a variety of reasons, including that we probably wouldn't be able to afford a home in Massachusetts at this point.

The Boston Red Sox beat the Tampa Bay Rays 5-4 last night.   Chris Sale gave up two runs and four hits over six innings, and the key hit was a pinch-hit home run by Christian Vazquez to give the Sox the lead in the seventh inning.  Things got dicey in the 9th, as the Rays pulled within one run, but the Sox shut them down with the bases loaded to hang on for the victory.  Don't look now, but the Red Sox are tied with Tampa for second place in the AL East.  Granted, they're still 10 games behind the New York Yankees, but hey, baby steps.  Next up, David Price takes the mound against the Rays this afternoon (looks like we'll have to push back gardening time) as the Sox go for the sweep.

Boston Red Sox first baseman Mitch Moreland is finally back from the injured list. That's a defensive upgrade, although his replacements have done a decent job filling in for him.  It's unfortunate that the corresponding move is sending Marco Hernandez back to Triple-A.  Hernandez has been a great comeback story after returning to the majors following shoulder surgery, but that .339 batting average will also be missed.  Hopefully that's not the last we've seen of the utility infielder this season.

The NBA is going to have to take another look at their rules about free agency. Given how many big-name players announced deals with their new teams within about a minute of free agency beginning this year, it appears the tampering rules aren't being enforced particularly well.

Running back Adrian Peterson is apparently deep in debt despite making over $100 million in his career.  It's a story as old as time, but given Peterson's past child abuse scandal, our sympathy is not high.

It's interesting, although not completely surprising, to hear that Sylvester Stallone doesn't have any ownership stake in the Rocky franchise. He's responsible for the character's creation, but it's easy to picture a young struggling actor giving up any ownership claim while trying to find his road to success.  What might be a touch more unexpected is Stallone revealing that there's a new Rocky movie in the works, as well as talk of a prequel and a TV series.

Someone will have the chance to own a real piece of rock and roll history when B.B. King's "Lucille" guitar goes up for bid during the late musician's estate sale on September 21.

Okay kids, that's going to do it for now.  What can we do to glide through hump day...How about we have Pharrell Williams close things out with, "Happy," for today's, "Song of the Day."  Yeah, let's do that.

Thanks for stopping by, everyone.  It was a treat to see you, as always.  BDH and Little Buddha say you're welcome to come back later to watch Mueller's testimony and/or the Red Sox game with us.  They'll also be happy to read to you from their new book.  Otherwise, enjoy the rest of your day, be good, and we'll catch up with you again for more fun soon.  Until next time, that's today's Clearing out the Clutter, and we are outta here.