Welcome back!  Come on in, have a seat.  I have to admit, I was not paying close enough attention when BDH and Little Buddha told me how warm and muggy it was going to be yesterday.  I went for a bike ride after we were done here and then walked around town for a while to take care of some errands.  Once I got back to the office, it was clear there was no way I was going outside again for about another six hours.  Oof, that was ugly.  The guys say today should be a touch cooler, but I've got the water jugs on standby in the fridge.

On a different topic, I can't say I love that tomorrow is August 1.  Summer needs to tap the brakes just a little bit.  However, I'm being reminded to try to stay in the moment and appreciate that it's still July for one more day.  Fair enough.  I'm also being told that there's a fresh pot of coffee on the counter, so grab yourself a nice medium DD, and let's clear out some Wednesday Clutter.

The ACLU says the Trump administration has separated over 900 parents and children more than a year after a court ruling ordered them to stop.  It is horrific that kidnapping is standard operating practice for our government at the moment, and this kind of blatant disregard for the judicial branch needs to be stopped.

It appears Senate Majority Leader Mitch McConnell doesn't care for his new nickname, "Moscow Mitch." If only there was something he could do about it, like allowing votes to tighten up our election security and stop enabling Russia's agent in the White House.  Otherwise, it appears we'll be sticking with "Moscow Mitch" and continue talking about the damage the man has done to our democracy. 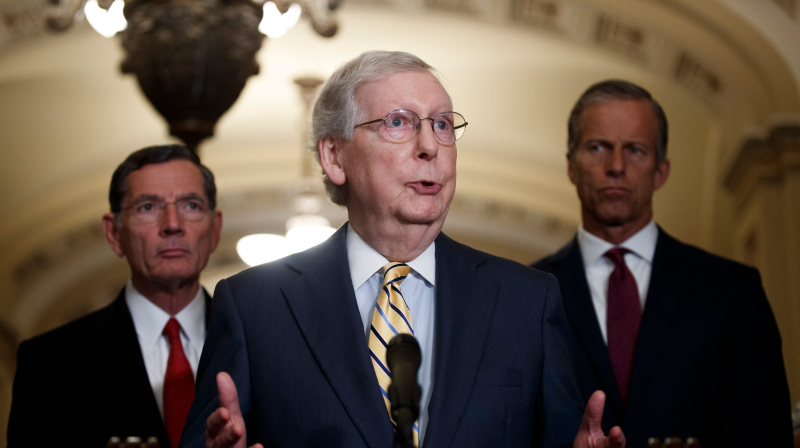 A recording of Ronald Reagan labeling African delegates "monkeys" during a phone call with Richard Nixon was recently released.  Will Donald Trump somehow try to claim this vindicates his recent racist attacks?  In any case, it is more proof that the GOP's embrace of racism isn't something that just started in the last two years.

Last night was the first of two Democratic presidential debates this week.  As expected, the moderate candidates who are desperate to break through and continue their campaigns tried to contrast themselves with Bernie Sanders and Elizabeth Warren.  However, none of them scored a damaging blow, as opposed to Warren criticizing John Delaney by saying, "I don't understand why anybody goes to the trouble of running for president of the United States just to talk about what we really can't do and shouldn't fight for."

The moderates are trying to convince voters that we can't expect much more out of our government than to have it not be run by Donald Trump.  That's certainly an important accomplishment, but we can and should set a much higher bar than just a preservation of what used to be the status quo.  The second debate is tonight, and then hopefully we'll get some winnowing of this group before the third round in September.

Today's the big day, as Wall Street observers expected the Federal Reserve Board to announce an interest rate cut this afternoon.  The Clutter investment team did some back-of-the-envelope math, and a quarter point cut might still leave us with enough each month to get a small coffee, but we'll keep some singles in the wallet just in case we run short.

There's a "black supermoon" tonight, so apparently that leads to darker skies than usual.  Might be worth seeing what else becomes visible under those conditions.

The Boston Red Sox lost 6-5 to the Tampa Bay Rays last night. David Price had a short outing, giving up four runs in just 4 1/3 innings.  That's the kind of performance from Boston's starting rotation that has gotten them into trouble all year.  This says it all: "Price, who has allowed 13 earned runs in his last three starts (14⅓ innings), has not pitched into the seventh inning since June 2 against the Yankees."  The trade deadline is at 4:00 this afternoon, and there's no bullpen help that's going to counterbalance this kind of of inconsistency from Price, Chris Sale, and Rick Porcello.  This team's chances at a postseason run will live or die on whether those three can get it together.  Rick Porcello takes the mound against the Rays tonight.

The Cleveland Indians have apparently had enough of pitcher Trevor Bauer.  The Indians sent Bauer to the Cincinnati Reds in exchange for outfielder Yasiel Puig as part of a three-team deal that also involved the San Diego Padres. Bauer's tantrum on Sunday when he threw the ball over the center field wall after being lifted from a game probably didn't help him with manager Terry Francona.  However, Puig has his own history of issues, and he managed to work in one more brawl before he left Cincinnati last night, so good luck with that, Tito.

(On a side note:  You can watch last night's Reds - Pittsburgh Pirates fight if you click on that last link.  It's a big mess, but it also highlights that baseball "fights" are generally overblown affairs.  You get a lot of guys charging at each other, but then they're almost all "held back" by others and just end up jawing at the other team for five minutes.)

WWE wrestler Big Show is getting his own family sitcom on Netflix. We suspect that might not be awful.  "Show" has demonstrated a decent sense of comedic timing over the years, and he might be serviceable in this role.  What do you think, wrestling fans?  Are we out of our minds here?

We know a number of people who will be interested in this new documentary about John Lennon and Yoko Ono working together on the legendary Imagine album.  John & Yoko: Above Us Only Sky comes out on September 13, but you can check out the trailer now:

Okay kids, that's going to do it for now.  Here's Joan Jett teaming up with the Foo Fighters for her classic hit, "Bad Reputation," for today's, "Song of the Day."

Thanks for stopping by, everyone.  It was great to see you, as always.  Enjoy the rest of your day, stay cool, and we'll catch up with you again in August.  Until next time, that's today's Clearing out the Clutter, and we are outta here.