Welcome back!  Come on in, have a seat.  I was just telling BDH and Little Buddha how I finally got a good night's sleep last night, but now I have a headache.  They just came back with the Advil, because those two are the best.  Other than the headache, things are going well around here at the moment.  The flowers are blooming in the garden, and they look terrific.  I wish the back yard could look like this all year, but I'll take 1000 pictures to look at in the middle of the winter.  In the meantime, let's check out today's headlines.  The guys say the coffee is ready, so grab yourself a nice medium DD, because it's time to clear out some Tuesday Clutter.

Donald Trump is all-in on his racist tweets calling for four congresswomen to "go back where they came from."  Trump denied that the tweets were racist yesterday, as he counts on his Nazi-loving supporters to back him up, and for other Republicans to be cowed into submission as usual.  Massachusetts Governor Charlie Baker was one of the only Republican officials in the country who had the backbone to call Trump's statements racist, while others hemmed and hawed, offering vague statements of disapproval.  Trump could in fact shoot a man in the middle of the street, and the GOP would attack Democrats for pushing a radical anti-gun agenda.  That party is a disgrace.

The four officials who were targeted by Trump had a press conference yesterday to announce they have no intention of backing down from the Great Pumpkin.  "The Squad" is unabashedly calling out Donald Trump's actions.  It's why they were elected.  Representatives Ayanna Pressley, Alexandria Ocasio-Cortez, Ilhan Omar, and Rashida Tlaib said they will continue to fight for those who have been left behind by this administration and oppose his "hateful" policies.  Don't forget, they became the subject of Trump's wrath in the first place after objecting to the fact that his administration has kidnapped children.  It's not difficult to find the right moral call here. 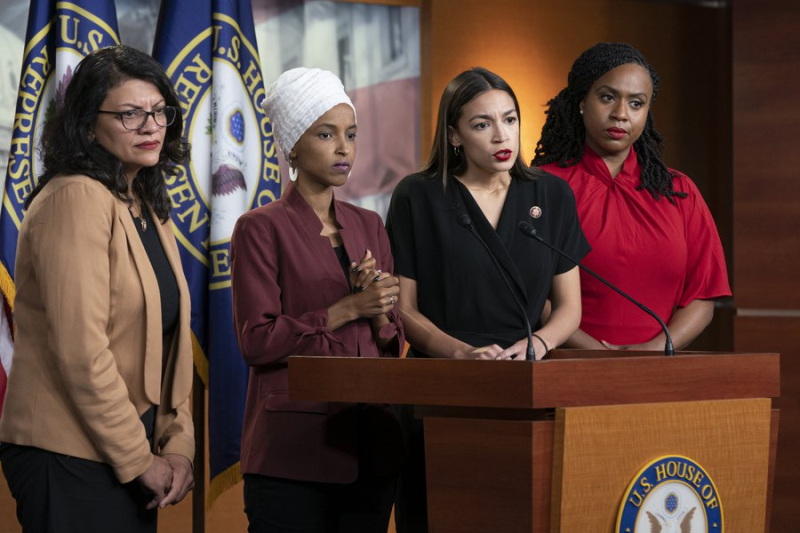 The Trump administration's regulations barring health clinics that receive federal family planning funds from referring patients for abortions went into effect across the country yesterday.  It's a blatant attack on the ability of low-income women to receive fundamental health care services that serves no purpose except to carry out the anti-choice agenda.

Les Wexner is now trying to distance himself from Jeffrey Epstein. Wexner, the chairman of the company that owns Victoria's Secret, says he "regretted my path ever crossed his," and that he had no idea about Epstein's abuse of underage girls.  Epstein's activities seem to have been the the worst-kept secret around, so the plausibility of Wexner's statement is up for debate.  On a related note, we're still waiting to hear how Jeffrey Epstein actually made his money.

A terrible story in Manchester, New Hampshire, as a man jumped off a bridge overlooking I-293 and died after being hit by two vehicles. Our thoughts go out to his family, as well as the two drivers who will likely need some professional help after being subjected to that trauma.

We've been meaning to get to this for a couple of days, but a quick note about Boston sports radio host Gerry Callahan being shown the door last Friday: It's long-overdue.  Callahan contributed to the racism, sexism, and general toxicity of the radio market for 20 years.  Of course, none of that mattered to parent company Entercom Communications.  What finally got Callahan the ax was an extended run of declining ratings.  Whatever the reason, good riddance.

The Boston Red Sox beat the Toronto Blue Jays 10-8 last night. The Sox jumped out to a quick 5-0 lead, thanks to rookie Michael Chavis hitting the first grand slam of his career in the first inning.  Rick Porcello, who was walking a tightrope all evening, gave up four runs over six innings.  Things got tighter than they should have been, with Toronto scoring four more runs in the 8th inning, but the Sox eventually held on for the victory.  Next up, Andrew Cashner makes his debut for the Sox tonight after being recently acquired in a trade from the Baltimore Orioles.  We don't want to build up the hype too much, but it would be a boost if Cashner can solidify the fifth spot in Boston's pitching rotation.

The Red Sox made a couple of personnel moves yesterday. Eduardo Nunez was designated for assignment, Hector Velazquez was sent to Pawtucket, and Ryan Weber and Sam Travis were recalled to the majors.  We're a touch sorry to see Nunez go.  He was a valuable member of the 2018 championship team, he clearly put his body on the line when he played, and it sounded like he was good in the clubhouse.  However, he was struggling all year at the plate, and it was clear the Red Sox needed an upgrade.  We thank Nunez for his time in Boston and wish him the best moving forward.

Some random guy on Twitter criticized Tom Brady's high ranking in this year's Madden game, and Brady had the perfect response.

Melissa McCarthy, Tiffany Haddish, and Elizabeth Moss as mobsters?  Consider us intrigued.  The Kitchen opens on August 9.  Check out the trailer and let us know what you think:

Okay kids, that's going to do it for now.  Someone made a fantastic video of Good Omens clips set to the Queen/David Bowie classic, "Under Pressure."  Warning - there are some spoilers in the video, but check out the brilliance that is David Tennant and Michael Sheen in today's, "Song of the Day."

You can also check out our Good Omens review here.