Welcome back!  Come on in, have a seat.  We're just trying to work through some IT issues here this morning.  Not sure if it's because of the rain or what, but our staff is on the case, so it should all be resolved soon.  Speaking of the rain, I guess I won't have to water the garden this week.  The plants are getting a solid soaking, which is terrific.  We're also enjoying the fact that it's about 30 degrees cooler here than it was around 36 hours ago.  Hold on...BDH and Little Buddha think they've fixed the computer problems.  Nicely done, guys.  They also say there's a fresh pot of coffee on the table, so grab yourself a nice medium DD, and let's clear out some Tuesday Clutter.

The Department of Justice (DOJ) tried to intimidate Robert Mueller by sending him a letter yesterday instructing him to limit the scope of his testimony before Congress on Wednesday.  Mueller doesn't give the impression of being someone who wilts under pressure, and it reeks of desperation by DOJ to continue the cover-up perpetrated on this country by Attorney General William Barr.

Donald Trump and Congressional leaders seem to have reached a budget deal which would increase spending by $320 billion and suspend the debt limit until after the 2020 elections.  We say "seem" because given Trump's fondness for causing uncertainty whenever possible, we'll believe this is a done deal once he actually signs it into law.  Also, didn't candidate Trump claim he'd eliminate the federal deficit in eight years?  Republicans should never be taken seriously when they talk about these things, since the issue only seems to matter to them when a Democrat is in the White House, but are there any fiscal conservatives who will actually hold Trump's free-spending against him, or will they continue along as happy little sheep?

The Louisiana police officer who posted on Facebook that Representative Alexandria Ocasio-Cortez should be shot was fired yesterday, and so was another officer for liking the post.  Hopefully that's the end of this particular story, but it's clear that Donald Trump's hateful rhetoric continues to increase the safety concerns for his targets.  His decision to go all-in on racist attacks for his own political and legal survival could end up costing someone dearly.

Boris Johnson has been chosen as the next leader of Great Britain's Conservative party, which means he'll be the next UK prime minister.  Apparently British conservatives looked at Donald Trump and said, "Yeah, we need one of those." 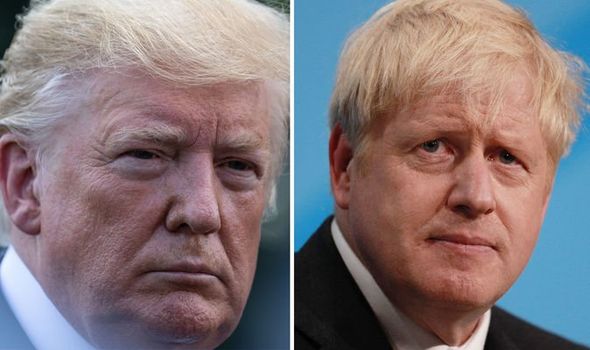 Two too many.  (pic via express.co.uk)

Credit reporting company Equifax agreed to a $700 million settlement to settle claims arising from its massive data breach in 2017 that left roughly 150 million people vulnerable to identity fraud.  As consumer advocates have mentioned, breach victims will only have the ability to file claims for the next four years (if the agreement is approved), but they'll be at-risk for a long time to come after that.  We're still left wondering why Equifax needs to exist in the first place.

GNC is closing approximately 900 stores, with a heavy concentration on those in mall locations.  Malls have been a dying breed for ages, so that's not surprising.  However, we're not clear on GNC's overall status.  The stores seemed fascinating years ago with all of their supplements that promised all sorts of wonderful results if you just took them with some milk or water.  However, haven't we confirmed that the supplement industry is largely unregulated, so many of these products can be useless or worse, dangerous?

We wrote here yesterday that the Boston Red Sox needed to show who they were by the trade deadline at end of this month.  They started the final stretch of July by beating the Tampa Bay Rays 9-4 last night. Eduardo Rodriguez had a terrific outing, giving up no runs and just two hits over seven innings.  Good things happen for the Sox every time E-Rod lasts at least six innings.  Nathan Eovaldi got hit hard in his first appearance in the majors after elbow surgery earlier this year, giving up three runs and five hits over just 2/3 of an inning, but we'll chalk that up to rust.

The Sox offense was driven by home runs from J.D. Martinez, Andrew Benintendi, and Sam Travis.  It was particularly good to see Benintendi have a productive night, going 3-5 with three RBI.  The left fielder has been off all year, and this would be a perfect time for him to get back on track.  Next up, Chris Sale takes the mound against the Rays tonight as the Sox try to get on a much-needed roll.

Congratulations to the Minnesota Twins for turning a  5-4-3 triple play last night, and bonus points for doing it against the New York Yankees:

Basketball legend Tim Duncan is returning to the NBA to be an assistant coach for the San Antonio Spurs. Is there an assistant in any of the professional sports that has a more decorated resume than Duncan with his 15 All-Star appearances, three NBA Finals MVP awards, and two NBA MVP awards ?

The first reviews are coming in for Quentin Tarantino's new film, Once Upon a Time in Hollywood, and it sounds like this could be a fun trip to the movies.

Ben Affleck and Matt Damon are reuniting for Ridley Scott's new movie to play...a pair of medieval knights who must fight each other to the death.  It would be nice to see these two back on the screen together again.  This is their first joint project since Good Will Hunting, and they also co-wrote the script with Nicole Holofcener, but we're going to need some more information about this one.

No spoilers here, but Veronica Mars fans, how are you feeling about the ending of Season 4, and do you want a Season 5?

Okay kids, that's going to do it for now.  It seems fitting to close things out with Led Zeppelin's, "Fool in the Rain," for today's, "Song of the Day."

Thanks for stopping by, everyone.  It's always a treat to hang out with you guys.  BDH and Little Buddha want you to know you're always welcome here.  In the meantime, enjoy the rest of your day, be good, and we'll catch up with you again for more fun soon.  Until next time, that's today's Clearing out the Clutter, and we are outta here.