Welcome back!  How are you?  I don't know what happened yesterday.  I got a good night's sleep, we all had fun hanging out here, and then....the productivity just fell off a cliff for the rest of the day.  I think it's because I kept waiting for that thunderstorm that was supposed to be eight hours long but ended up being about 90 minutes in the late afternoon.  Thunderstorms throw me off.  It's probably because of once specific incident that maybe we'll discuss another day, but I guess this was a reminder about needing to stay in the moment or something.  In any case, I've got a number of errands that have to be done today, and BDH and Little Buddha say there's no rain in the forecast.  They also say the coffee is ready, so grab yourself a nice medium DD, and let's clear out some Thursday Clutter.

It was a chilling sight last night as the crowd at Donald Trump's rally chanted "Send her back!" about Representative Ilhan Omar, an American Muslim congresswoman.  This is what fascism looks like, folks, and there's no reason to think it won't get worse before we're done.  Donald Trump is done with being "subtle" about his racism, and he's counting on it being what keeps him in the White House and out of prison.  Trump also needs it to distract his base from focusing on things like the video of him partying with sex offender Jeffrey Epstein in 1992. 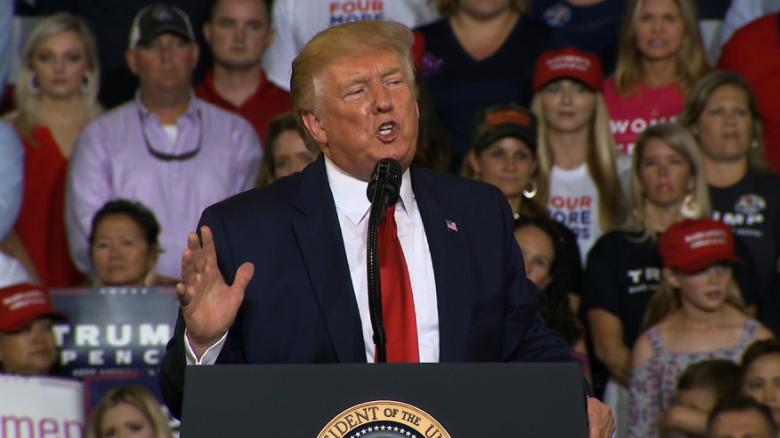 This is getting dangerous.  (pic via cnn.com)

Meanwhile, the House voted to hold Attorney General William Barr and Commerce Secretary Wilbur Ross in contempt for not complying with a subpoena to provide more information about their attempt to put a citizenship question on the 2020 census forms.  It's probably important to have that for the historical record, but House Speaker Nancy Pelosi is mistaken if she thinks that's going to satisfy those who are calling for her to hold the Trump administration accountable for their actions.

The House also voted down a measure to introduce articles of impeachment against Donald Trump by a vote of 332-95. It's telling that 95 Democrats are willing to publicly oppose Speaker Pelosi, and their ranks include House Judiciary Committee Chairman Jerry Nadler, who voted to move forward with the process.  However, any member can introduce this kind of legislation at any time, and it seems some Democrats are frustrated with sponsor Representative Al Green, who doesn't seem to have any plan to actually pass the bill.  Representative Nadler should open an impeachment hearing and lay out the case in an organized fashion, rather than hold a random vote like this.

Senator Rand Paul blocked passage of the September 11th Victim Compensation Fund yesterday, arguing that it first needs to be paired with a corresponding budget cut, because, you know, deficits and stuff.  Senator Paul had no objections to passing Donald Trump's tax cut that added hundreds of billions of dollars to the deficit, and now he's delaying health care funds for some of the biggest heroes in our nation's history.  It's an abomination.

We have conversation after conversation about the importance of online privacy, and then everyone immediately turns over their personal information to a Russian company just to see what they'll look like in 30 years. What are we doing here?  Yes, the pictures are entertaining, but they're not worth giving FaceApp "access to (all of) your photos, location information, usage data and browsing history" for to use for vague purposes for the rest of your life.

Elon Musk's new project is connecting computers to human brains. We're not surprised that someone is working on this, but besides all of the obvious bigger ethical issues that come with the idea, we wouldn't trust Musk with a car, so that's going to be a pass.

The Boston Red Sox beat the Toronto Blue Jays 5-4 last night, thanks to another terrific night from Rafael Devers.  The young Sox third baseman went 3-5 with four RBI, as he remains one of the hottest hitters in the majors.  When you take what he's done at the plate so far this year, and add it to his dramatically better defense, Devers has to be the leading candidate for the American League's most improved player this year.  If the Sox go deep enough, he's also on track to be in the MVP discussion.  Next up, Chris Sale once again looks for his first home win in over a year, as he takes the mound against the Blue Jays this afternoon.

David Price showed he's as clueless as ever, as he once again went after Boston Red Sox announcer/Hall of Fame pitcher Dennis Eckersley yesterday.  Price had a tantrum because he didn't like coming across poorly in a snippet from a much longer profile about Eckersley that came out earlier this week.  Eckersley was clearly still irritated by Price verbally ambushing him on the team plane two years ago, and Price responded by saying Eckersley needs attention, it's telling that his teammates weren't featured in the profile or the recent documentary about him, and he's not good at his current job.  1) Eckersley responded to a relevant question about his broadcasting career that was put to him by writer Chad Finn.  2) Both Finn and the documentary makers said they had an abundance of glowing quotes from former teammates that they decided not to use.  3) Dennis Eckersely is one of the best color guys in the game today.

Perhaps Price thinks he's being a good teammate by trying to distract everyone from how disappointing his team has been this year.  To us, he comes across as having an inferiority complex that's almost as big as Donald Trump's.  Even after winning a World Series, it's still a chore to root for him.  Manager Alex Cora said he's talked to Price about this situation, and hopefully he told him to just keep his focus on the field.  Otherwise, let the Red Sox see what the trade market is for a guy who is pitching well and still clearly doesn't want to be here.

We're sorry to hear that former Boston Red Sox player Pumpsie Green died yesterday at age 85. Pumpsie was the first African-American player in the team's history, making his debut in 1959.  He played with the Red Sox for four years and was inducted into the team's hall of fame in 2018.  Our condolences go out to his family and friends.

Jennifer Lopez is in a new movie where she plays the leader of a group of former strip club employees who rob their Wall Street clients?  Sign us up.  Hustlers comes out on September 13.  Check out the trailer:

We've also got the first trailer for the final season of Mr. Robot, which airs on the USA Network this fall:

A.P. Bio has been saved from cancellation after all and will air on NBCUniversal's new streaming service instead.

Okay kids, that's going to do it for now.  Let's have the great Stevie Ray Vaughan & Double Trouble close things out with, "Crossfire," for today's, "Song of the Day."

Thanks for stopping by, everyone.  It's always a treat to see you.  We hope today is productive for everyone, and if not, hey, there's always tomorrow.  In the meantime, stay out of trouble, and we'll catch up with you again soon.  Until next time, that's today's Clearing out the Clutter, and we are outta here.