Welcome back!  Come on in, have a seat.  How are you?  BDH and Little Buddha were just checking the weather forecast to make sure we don't have any more insane heat waves on the horizon anytime soon.  Looks like we're in the clear at the moment.  The guys also say the coffee is ready, so grab yourself a nice medium DD, and let's clear out some Thursday Clutter.

Robert Mueller testified before Congress yesterday, and he made a number of things clear (again):  His report in no way exonerated Donald Trump, it's clear that Trump's campaign encouraged/welcomed/benefited from Russia's interference in the 2016 presidential election, and there are multiple instances of Trump and his cronies trying to stop Mueller's investigation and then lying about it.  Anyone else besides the White House occupant would already have been indicted for obstruction of justice at this point. (Mueller also pointed out that a former president can be indicted for obstruction after leaving office.) 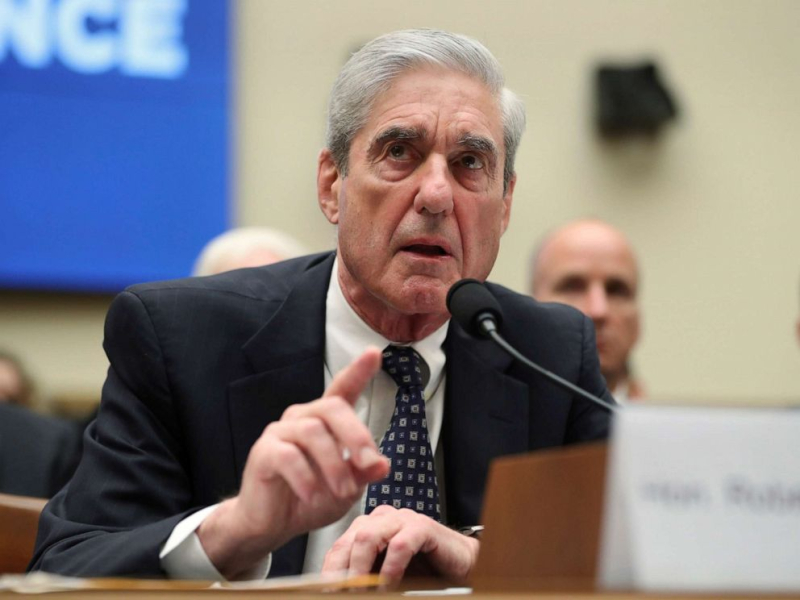 Mueller did his job, and now it's time for Congress to finally do theirs.  (pic via abcnews.go.com)

The discussions about Mueller's presentation style are pure distraction.  He made it clear ahead of time that he didn't want to testify and that he would limit his comments to his report, and that's what he did.  Anyone looking for a scene out of A Few Good Men, The American President, or The West Wing is the kind of person who is easily distracted by shiny objects.  Robert Mueller made it as clear as he felt he legally could:  Russia is interfering with this country, the person in the White House is their ally, and if no action is taken, this is going to become our new normal, which would be a disaster for the United States.

As expected, Donald Trump vetoed three resolutions blocking weapons sales to Saudi Arabia and the United Arab Emirates yesterday. Trump claims that Iran is the reason the sales must happen, but as with all things Trump, one has to ask what he's personally getting out of the deals, because the mob boss wannabe always gets his cut.

In case there was any doubt, the Department of Justice won't prosecute Attorney General William Barr or Commerce Secretary Wilbur Ross after the House voted to hold both men in contempt for not obeying subpoenas.  The rot in Washington continues to spread.

Donald Trump's friend Jeffrey Epstein was reportedly found in his prison cell with bruising on his neck yesterday.  It's unclear at the moment whether he tried to commit suicide, staged the attempt, or was attacked by another inmate.

Facebook is paying a $5 billion fine to settle claims about the company's abuse and disregard of its privacy policies. $5 billion is a drop in the bucket to Mark Zuckerberg, and apart from writing a check, no one at Facebook is facing any repercussions for any of their actions, so there's no reason for them to change their behavior.

Nissan is cutting 12,500 jobs after its first-quarter profit fell by 94.5%.  We're not business experts, but that doesn't seem good.

The Boston Red Sox lost 3-2 to the Tampa Bay Rays yesterday. The big story of the day was Rays manager Kevin Cash throwing the game into a state of confusion for about 20 minutes when he brought in a reliever, had him face one batter, moved the reliever to first base for one batter, and then brought the reliever back to the mound.  That's the short version.  Cash's move left the umpires to determine the new batting order, and any situation where Angel Hernandez has to decide something important about a game is never good.

Sox manager Alex Cora disagreed with the end result, Cash had the cajones to complain about how long it took to straighten things out, and the Sox played the rest of the game under protest, so we'll see what comes of that.  In the meantime, the Red Sox are back home, and they start a critical four game series with the New York Yankees, with Rick Porcello taking the mound tonight.  The Red Sox are 11 games behind the Yankees in the AL East and still two games out of the wild card race.  They've got to use the next four games to tell Dave Dombrowski what to do before the July 31 trade deadline.

It's disappointing, but probably not all that surprising, to hear that Hall of Fame closer Mariano Rivera is a far right-wing Donald Trump supporter.

All Elite Wrestling (AEW) makes its TV debut on TNT on October 2. The new wrestling company is the most interesting competition the WWE has faced in years.  They've done a terrific job of building up their hype with a handful of well-received events, and they already have a loyal fan base.  Now the question is whether they can deliver the goods on a weekly basis.  In any case, it's always good for wrestlers to have more places to work, so we wish AEW the best.

We've got a few tidbits about the final season of Criminal Minds for anyone who might be interested.

The Douglas Adams classic Hitchhiker's Guide to the Galaxy is coming to Hulu. That's a fantastic book.  We'll be curious to see who gets cast in this latest adaptation.

Sorry to hear that actor Rutger Hauer died on Friday.  Our condolences go out to his family, friends, and fans.  Hauer was 75 years old.

Hey Motley Crue fans, the band's autobiography, The Dirt,is now available on audiobook. You can click on the link to find out out how to order it, although we do need to point out that you can also buy it through our Amazon page, which would both allow you to get it and us to order more coffee.

Okay kids, that's going to do it for now.  Here's David Bowie to close things out for us with, "Changes," for today's, "Song of the Day."

Thanks for stopping by, everyone.  BDH and Little Buddha always ask when you'll be back, and their faces light up every time they see you.  Enjoy the rest of your day, be good, and we'll catch up with you all again soon.  Until next time, that's today's Clearing out the Clutter, and we are outta here.