Welcome back!  Come on in have a seat.  How are you?  I didn't sleep well last night, so my apologies if this is incoherent in any way.  I don't know if it was just the humidity or what, but it was just one of those nights where sleep and I weren't speaking to each other.  BDH and Little Buddha suggest we consider a nap in the afternoon, maybe with the fan directly on us or something.  Those two are always thinking.  They also just brought in a fresh pot of coffee, so grab yourself a nice medium DD, and let's clear out some Sunday Clutter.

Former Labor Secretary Alex Acosta resigned over the fallout from the Jeffrey Epstein scandal since the last time we all met up here.  While Donald Trump said he didn't ask for Acosta's resignation, there's no doubt the Great Pumpkin is trying to put as much distance between Epstein and himself as possible.  Trump is trying to claim he's "not a fan" of Epstein, but Trump biographer Tim O'Brien says he both knew and "admired" Epstein. Also, how has it just disappeared into the void that Trump is accused of raping a 13 year-old girl at Epstein's house?

The footage of Mike Pence and Lindsey Graham staring at the men being held in concentration camps in Texas will not be well remembered by history.  The two men looked at the captives like they were animals.  Pence says eating alone with a woman who isn't his wife violates his religious beliefs, but he's apparently fine with this torture.

Robert Mueller's testimony before Congress has been pushed back a week to July 24. We'd have more vested in this, except a) it should have happened right after the report was released, and b) House Speaker Nancy Pelosi is more concerned with protecting her own power than protecting the country from Trump.

The Boston Red Sox lost 11-2 to the Los Angeles Dodgers last night. Chris Sale had another rough outing, giving up five runs over just 4 2/3 innings.  Sale now falls to 3-9 with a 4.27 ERA on the season.  He hasn't won a regular season game at Fenway Park since July 11, 2018, which is bizarre.  Boston's chances of making a playoff run this year largely depend on whether or not Sale can figure out how to turn around his season.

Granted, part of it is that he could just use more run support, as the Sox are only giving him an average of 3.65 runs per game.  However, also getting him back to his consistently dominant form would be the equivalent of a major trade at this point.  Sale still sounds as lost as ever, and we once again ask where pitching coach Dana LeVangie is in all of this.  If LeVangie can't help, the Sox should find someone else to talk to Sale, whether it's Pedro Martinez or someone outside the organization.  In any case, David Price takes the mound for the Sox tonight as they try to win their series against the Dodgers. 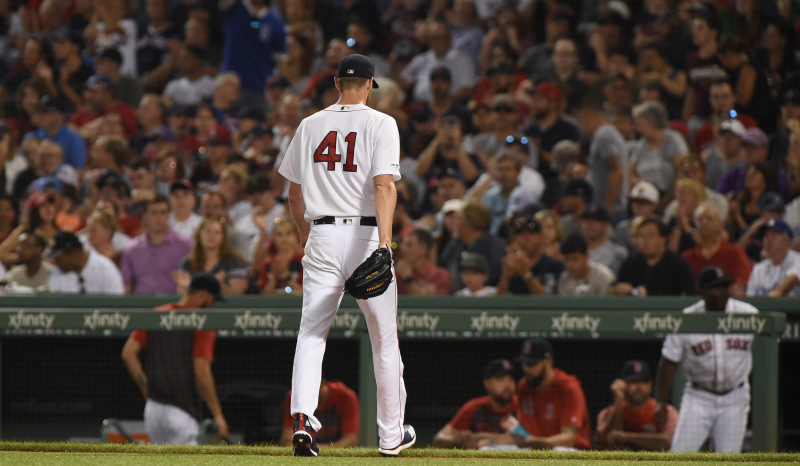 What will it take to fix Chris Sale?  (pic via nbcsports.com)

The trading deadline isn't until the end of the month, but the Boston Red Sox are already on the move.  The Sox acquired pitcher Andrew Cashner from the Baltimore Orioles for two minor league prospects yesterday.  Cashner is 9-3 with a 3.83 ERA this year, which means he had about 1/3 of Baltimore's wins this season.  He'll take the fifth spot in the rotation, which needed someone now that Nathan Eovaldi has gone to the bullpen.  It's not exciting, but it seems like a solid move.  Cashner should be an upgrade over everyone else who has been in that slot, and if he pitches well, it should also provide some extra relief to the bullpen.

ICYMI: The Los Angeles Angels no-hit the Seattle Mariners on Friday, which was their first game since the death of Angels pitcher Tyler Skaggs on July 1.  That would have been emotional enough of a story by itself, but there were all sorts of other items to add to the legend of the game.  For example, Skaggs' mother threw 0ut the first pitch. The Angels scored seven runs in the first inning and winning by a final game of 13-0 (Skaggs' birthday was 7/13.)  Oh, and the last time there was a combined no-hitter in California?  It was July 13, 1991, which was the day Skaggs was born.  Hollywood couldn't come up with this story.

The Chicago Cubs beat the Pittsburgh Pirates 10-4 yesterday. Chicago ace Jon Lester had a typical quality start (6 2/3 innings , three runs, six strikeouts and no walks.)  However, that wasn't enough for Lester, who also hit a home run and ended up going 2-3 with 3 RBI.  Why can't the Red Sox get pitchers like that?

Okay kids, that's going to do it for now.  Let's close things out with something bouncy.  Here's Katy Perry with "Hot N Cold," for today's, "Song of the Day."

Thanks for stopping by, everyone.  It was great to see you, as always.  Enjoy the rest of your day, be good, and we'll catch up with you again for more coffee soon.  Until next time, that's today's Clearing out the Clutter, and we are outta here.

Posted by Colin Moore at 07:49 AM in Current Affairs, Music, Sports | Permalink | Comments (0)