Welcome back!  Come on in, have a seat.  How's your weekend going so far?  No complaints on this end.  I've got a couple of errands to do today, and then I should be able to get in some garden time before tonight's Red Sox - Yankees game.  That's about all I ask for out of a Sunday in July.  Speaking of the garden, the flowers are pretty close to being in full bloom, and everything looks terrific.  It feels like the schedule was off by about a month this year, so hopefully that means I have at least two more weeks of it looking like this.  Anyway, let's check out today's headlines.  BDH and Little Buddha just said the coffee is ready, so grab yourself a nice medium DD, because it's time to clear out some Sunday Clutter.

Donald Trump continues escalating his racist attacks. This time, he went after Representative Elijah Cummings' Maryland district, including parts of Baltimore, calling it a "disgusting, rat and rodent infested mess," and that "no human being would want to live there."  At this rate, Trump is going to drop the N-word before the year is out.  Some will argue this is driven by politics, others will say it's just his true feelings being said out loud.  There's no reason it can't be both.  Trump continues to disgrace the White House and the country on a daily basis.  As the Baltimore Sun's editorial board wrote in response, it's, "Better to have some vermin living in your neighborhood than to be one."

There's a lot of discussion about the fact that the House of Representatives filed a petition to get access to Robert Mueller's grand jury testimony on Friday. House Judiciary Chairman Jerry Nadler (D-NY) indicated this was a step forward towards opening impeachment hearings.  Those hearings are long overdue, so maybe this is promising.  On the other hand, nothing in the court system ever seems to move quickly, so is this a way for House leadership (i.e. Speaker Nancy Pelosi) to try to reduce the pressure from pro-impeachment legislators while running out the clock?

Donald Trump is angry at Fox News for showing him losing in a recent poll.  Perhaps that's why he thinks his base needs a new distraction, so now he's calling for an investigation of Barack Obama. The Great Pumpkin is grasping at straws when that's the best he can come up with.  Meanwhile, we're still waiting to hear more about Trump's longstanding friendship with pedophile Jeffrey Epstein.

Cheers to Representative Ayanna Pressley (D-MA) for filing a bill to repeal capital punishment at the federal level. The proposed legislation comes in response to the news that Attorney General William Barr has ordered the resumption of executions after a long informal moratorium.  As Representative Pressley tweeted, "The death penalty has no place in a just society."

We had a blast at Fenway Park on Friday night.  It's always good to be there, but seeing the Boston Red Sox beat the New York Yankees, with Mookie Betts hitting three home runs, was a special kind of fun.  The Sox continued the party by topping the Yankees 9-5 yesterday. Boston continued clicking on all fronts.  Eduardo Rodriguez gave up three runs over 5 2/3 innings, and the offense was led by home runs from J.D. Martinez and Andrew Benintendi.  Don't look now, but it appears the world champion Red Sox are finally showing up for the 2019 season. It looks like business might be picking up all of a sudden. The Sox won their series against the Tampa Bay Rays, they have a chance to sweep the Yankees, and they're currently tied for the 2nd wild card spot with the Oakland A's.   Chris Sale tries to keep the momentum going when he takes the mound tonight. 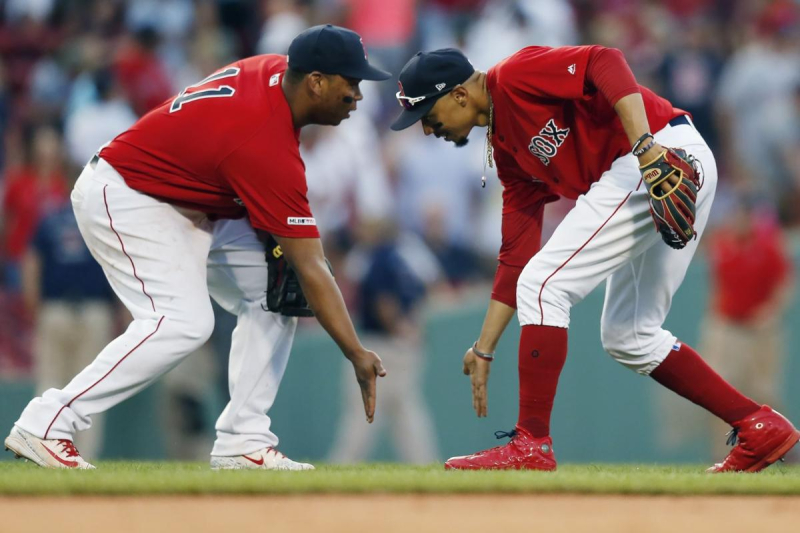 The Red Sox are heating up, and not a moment too soon.  (pic via pilotonline.com)

Big Papi News Desk:  It's great to hear that David Ortiz has reportedly finally been discharged from Mass General Hospital almost two months after being shot in the Dominican Republic.  There isn't much confirmed information about his condition, but if he's well enough to have left the hospital, we hope he's on his way to a full recovery.

We've got the first trailer for season 2 of Jack Ryan for you.  It looks like John Krasinski has a lot to deal with as the title character.  See for yourself:

Okay kids, that's going to do it for now.  Here's Bob Seger to wrap things up for us with, "Hollywood Nights," for today's, "Song of the Day."