(Movie Review) Once Upon a Time...in Hollywood

Quentin Tarantino is back with his latest film, Once Upon a Time...in Hollywood, which is a love letter to the end of the glory days of the film industry in 1969.  However, it's a tribute with a dark side.  The film stars Leonardo DiCaprio as Rick Dalton, a television actor entering the back half of his career, and Brad Pitt as Cliff Booth, Rick's stuntman and gopher. Tarantino is in fine form as he pays homage to the old movies and television shows he loves, while bringing an air of danger to the story in the form of Charles Manson and his followers.

DiCaprio and Pitt is a pairing of megastars that works so well, you wonder why it hasn't happened before.  It's fun to watch these two alpha males go against type by playing losers.  DiCaprio is an entertaining high-strung mess as Rick Dalton ponders the beginning of his professional slide.  Pitt and Cliff Booth both just seem happy to be along for the ride, as Brad Pitt once again confirms that he'll be ridiculously cool and handsome for all of eternity.  Both men drink too much, and they seem to be just stumbling along to the next job.  Booth is also carrying a personal scandal that follows him in his professional life.

Margot Robbie stars as actress Sharon Tate.  The actress doesn't have a lot of lines.  She's more of a vehicle of exuberance and joy than a full-fledged character.  We might argue that it works in this case and sets the viewer up for a fall, given her well-documented fate at the hands of the Manson family.  However, it is also fair to say that women besides Tate are generally placed far in the background and/or framed in a negative light in this movie.

Of course, one of the highlights of any Tarantino film is the soundtrack, and this is no different. We've got Simon & Garfunkle, Paul Revere and the Raiders, Neil Diamond, Deep Purple, and a host of others keeping the story-line humming along. The sights and sounds of 1969 are recreated in astonishing detail and should be seen on the big screen to be fully appreciated.  We also have to say it was nice to see the late Luke Perry in once last supporting role.  Oh, for those who follow such things, Quentin Tarantino apparently has a thing for feet, and it shows.  There are a lot of shots of feet in this movie.  A.  Lot.  We're not judging, just observing.

The movie does a good job of making us care about the two men all the way to the end of the movie, and the final sequence is classic Tarantino.  Once Upon a Time...in Hollywood isn't the director's best movie, but it's in the top half of the list.  Fans of DiCaprio, Pitt, and Tarantino will enjoy the ride. 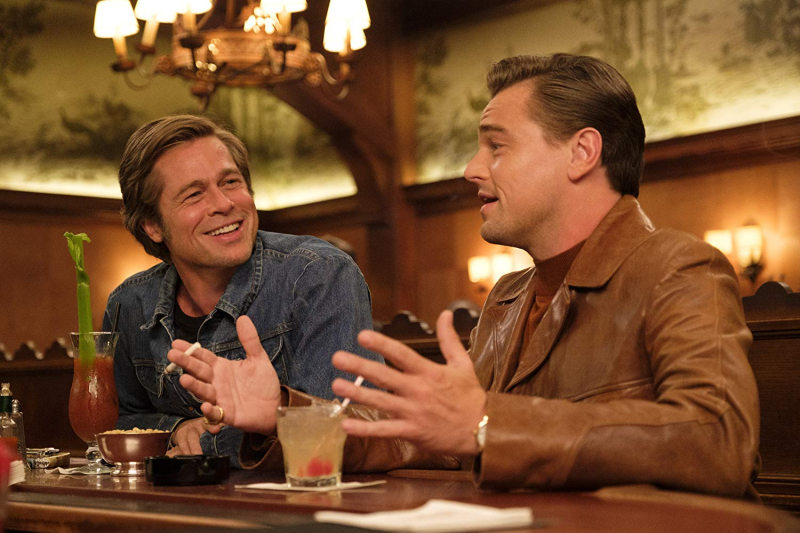