Welcome back!  Come on in, have a seat.  Glad to see you all survived the heat wave.  That was a little nuts.  I think I was outside for 10 minutes on Saturday, and that was more than enough.  Sunday was spent helping Dad Clutter park cars for the  NASCAR race in New Hampshire.  The turnout  looked like it was 1/4 of what it used to be (if that.)  The crowds have been declining for years, and it seems like NASCAR may be on its last legs around here.

The good news about that was that he and I spent a good part of the day in his car with the A/C on while we waited for people to arrive.  However, even the rest of the day after the race started was a little challenging.  Don't worry, BDH and Little Buddha are fine.  Once they made sure I had enough water, they weren't silly enough to go outside with me.  They're excited you're all back, and they just put a fresh pot of coffee on the counter.  Grab yourself a nice medium DD, and let's clear out some Monday Clutter.

Robert Mueller is scheduled to testify before Congress on Wednesday, and House Judiciary Committee Chairman Jerry Nadler says Mueller's report offers "very substantial evidence" that Donald Trump is "guilty of high crimes and misdemeanors." There is a remedy for that situation, and if House Speaker Nancy Pelosi doesn't approve the opening of an impeachment hearing after Mueller's testimony, she has no excuse except putting a desire to protect her own power over the need to protect this country. 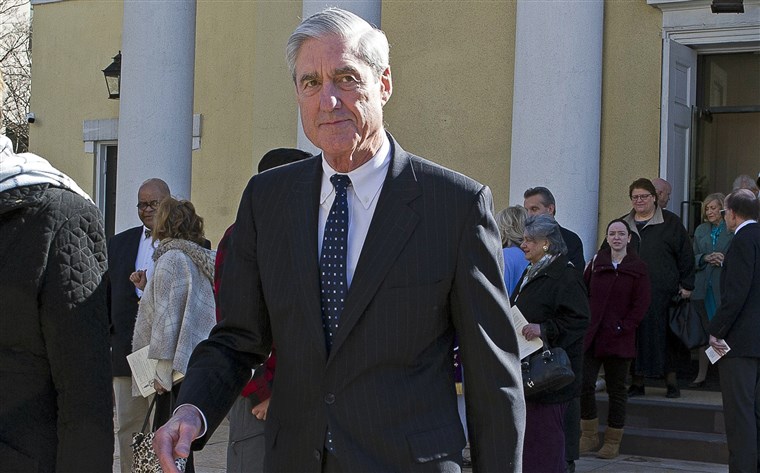 All eyes will be on Robert Mueller on Wednesday.  (pic via nbcnews.com)

Donald Trump continued his attacks on four progressive congresswomen over the weekend, tweeting that he didn't believe they love America. The man will burn down the country to keep himself out of jail, and every last member of the GOP who supports him is complicit in this abominable behavior.

White House junior Grand Wizard Stephen Miller was sent to Fox News to defend Donald Trump from racism accusations on Sunday, but Chris Wallace wasn't having it, thus making Wallace the only person at that Network who doesn't kiss Trump's feet.

This story about Trump friend Jeffrey Epstein paying his way into Hollywood parties is enough to make one's skin crawl.  The woman Epstein paid, planner Peggy Siegal (who reportedly didn't tell her clients about Epstein's presence at their events), claimed Epstein's pedophilia “just wasn’t common knowledge” before late 2018, a claim which doesn't hold up under review.  How many girls did Epstein prey on at these parties?

Holyoke Mayor Alex Morse announced he'll challenge Massachusetts Representative Richard Neal in 2020. Morse has a significant challenge ahead of him as he takes on the House Ways and Means chairman.  However, as Ayanna Pressley showed in the last election cycle when she beat then-incumbent Mike Capuano, there is a desire for change in Massachusetts.  Morse will offer a much more progressive choice in the first congressional district, so we'll see how voters respond.

A Louisiana policeman who suggested shooting Representative Alexandria Ocasio-Cortez should be fired on the spot.

The Boston Red Sox should have been thinking about sweeping the Baltimore Orioles this past weekend.  Instead, the Sox lost 5-0 to the Orioles yesterday as they nearly got no-hit by a no-name pitcher, and they ended up losing the series 2-1.  The Red Sox are 11 games behind the New York Yankees in the AL East and three games out of the wild card race.  They spend the rest of July playing the Yankees and the Tampa Bay Rays.  A bad run could bury them for the year, but what is Dave Dombrowski supposed to do if they get hot or just go .500 in that stretch?

At this point, we would generally just roll the dice with this roster.  They're talented enough to go on an extended hot streak, but the single most important thing they need is better performances from Chris Sale and Rick Porcello.  If it doesn't feel like that's going to happen, we'd listen to offers for Porcello, David Price, Mookie Betts, and J.D. Martinez with a goal of getting some prospects.  Either way, the last nine days of this month should be an interesting ride.  Next up, Eduardo Rodriguez faces the Tampa Bay Rays tonight.

The Big Papi News Desk finds it weird that the Boston Globe ran this piece throwing dirt on David Ortiz on Saturday.  The general point of the article is that Ortiz has hung out with a number of shady characters over the course of his career.  We have no problem believing that's true, and that this is also a common occurrence throughout professional sports.  However, why is it coming from the Globe, which is of course owned by Red Sox owner John Henry?  It feels like Henry wants to put some distance between the team and Big Papi.  Is there another story coming soon?  Not that it will matter, Ortiz will always be a hero to Red Sox fans.

Marvel had all sorts of announcements at Comic-Con yesterday, including that Natalie Portman will appear as a female Thor in the upcoming Thor 4: Love and Thunder, which will be out in November 2021.  We admit we need to know more about the comic to know how that works, but count us in for it.  (Click on the link to also find out the complete MCU phase four schedule.)

We're glad to hear that the Supernatural crew got a proper send-off at Comic-Con yesterday. They have a passionate fan base, and we would have expected nothing less than a standing ovation.  Still sorry that the show is beginning its final stretch, but we have no doubt the writers and cast will find a way to give the Winchester boys and Castiel a proper send-off in its 15th season.

Oh, we've also got the first of the returning characters for Supernatural's farewell.  We won't spoil it, but it's an obvious choice who needs resolution before everyone says goodbye.

Star Trek fans seem to be losing their minds over the new Picard trailer, so let's see what all of the fuss is about:

Yeah, if even we can tell that's fantastic, it's understandable that the hardcore crew would be freaking out right now.  Picard will debut on CBS All Access in 2020.

Avengers: Endgame finally surpassed Avatar as the highest-grossing movie of all-time with $2.79 billion in receipts.  That doesn't factor in inflation (which makes Avatar's success even more impressive), but it's still a remarkable accomplishment.

Okay kids, that's going to do it for now.  Here's Cheap Trick to close things out with, "I Want You to Want Me," for today's, "Song of the Day."

Thanks for stopping by, everyone.  It was great to see you, as always.  Enjoy the rest of your day (with the more seasonally reasonable temperature), be good, and we'll catch up with you again for more fun soon.  Until next time, that's today's Clearing out the Clutter, and we are outta here.