Welcome back, and a happy Friday to you all!  Well, it's a grey and rainy Friday here at the moment, but it's still Friday, and that's what counts.  What's on tap for the weekend?  Not sure we have anything too crazy going on here, which is fine.  BDH and Little Buddha are looking for a new book to read again, so we may have to take another trip to the store.  Hopefully we'll find something on the light side this time.  For now, let's see what's going on in the world.  The guys made a fresh pot of coffee, so grab yourself a nice medium DD, because it's time to clear to clear out some Clutter.

Donald Trump was forced to concede defeat yesterday on his quest to have a citizenship question added to the 2020 census forms.  It looks like the Great Pumpkin isn't ready to blatantly defy the judicial branch at this point, and unfortunately, that's a helpful thing to know at the moment.  Instead, Trump issued an executive order directing the Commerce Department to get related information from various agencies.  Although Trump and his cronies will try to frame it otherwise, this was a clear defeat in the courts.

Singer R. Kelly has been indicted on a new set of charges including child pornography and obstruction of justice. Kelly was already facing multiple counts of sex crime accusations involving underage girls.  At this point, we're starting to wonder a) if R. Kelly hung out with Jeffrey Epstein, and b) why so many wealthy men seem to be pedophiles.

Bed Bath & Beyond is apparently in rough shape. That reminds us, we should check to see if there's anything left on the gift card we got years ago.  Not sure what we need from the store, but maybe we could find something for BDH and Little Buddha.

Big Papi News Desk:  David Ortiz underwent a third surgery this week as he continues to recover from the gunshot wounds he suffered in June.  We don't know any of the specifics, but there does seem to be some quiet unease about how long Big Papi has been in the hospital.  Hopefully this was the last procedure he'll need, and we wish him a full and speedy recovery.

The All-Star break is over, and it's time for the Boston Red Sox to get back to action and figure out who they are this year.  First up, it's a World Series rematch, with the Sox facing the Los Angeles Dodgers at home this weekend.  Boston starts the unofficial second half of the season with a record of 49-41, they're 9 games behind the New York Yankees in the AL East and 2 games out of the Wild Card race.  They've got some decisions to make about trades before the end of the month, and we're curious to see how that plays out.  Their farm system isn't that deep, so if they move prospects, it better be for someone who is going to stick around for a while.

Pitching is the team's priority, and our first question is whether they are thinking about trading Rick Porcello.  He's a free agent at the end of the season, and it doesn't seem like the team has expressed any interest in re-signing him.  Other than Porcello, the only other starter we're really wondering about is Mookie Betts.  He's probably not going anywhere, but if the Sox don't think they'll be able to get him to agree to a new deal after 2020, this would be the time to trade him.  Mookie would bring much more of a haul now with one more year of service remaining on his contract.  Hopefully this will all be moot, and he'll sign a new deal down the road, but that doesn't seem like a given. 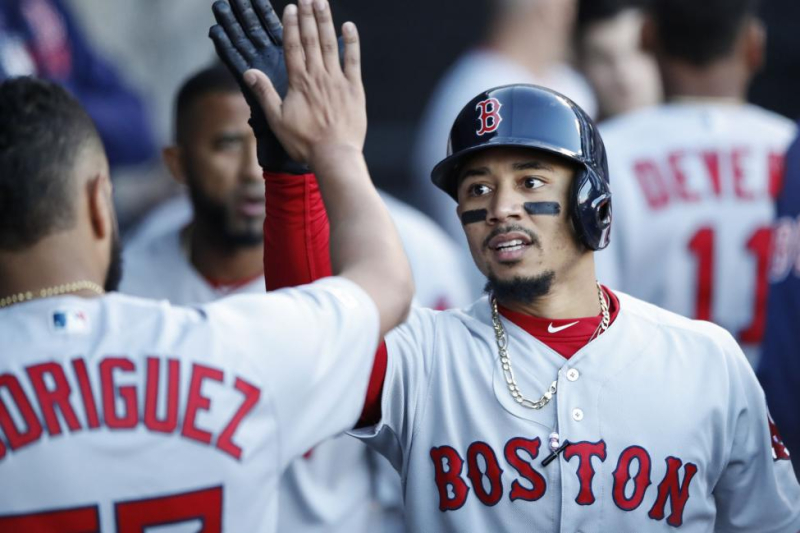 Where will Mookie Betts be on August 1?  (pic via upi.com)

The Boston Red Sox finally released Tyler Thornburg on Wednesday. The reliever had potential when he came over from the Milwaukee Brewers in 2017, but he missed his entire first season with Boston because of a shoulder injury and was never the same after that.  We'd probably feel a little stronger about his poor stint, given that it cost the Sox third baseman Travis Shaw, but Rafael Devers has us feeling so good about his play, we're ready to forget about the entire thing.

Give it to the NBA, their off-season is much more interesting than Major League Baseball's.  The free agents were moving fast and furious, but the show's not over, because now there's the blockbuster trade of the Oklahoma City Thunder sending Russell Westbrook to the Houston Rockets for Chris Paul and four draft picks. How are we feeling about that move, basketball fans?  Whatever the opinion, it's more entertaining than waiting six months for your favorite baseball team to add a left fielder or a fourth pitcher.

Varsity Blues is reportedly the next movie to get a reboot. Not sure how anyone could top the glory of James Van Der Beek as a high school quarterback.  His utterance of the line, "I don't want your life," is right up there with Keanu Reeves yelling, "I am a FBI agent!" in Point Break.  You can't improve perfection.

We've got a brief clip from the new BH90210 show for you.  Be honest, we're all going to check that out when it premieres on August 7.

Rumors are growing that AC/DC will soon announce an upcoming tour that features singer Brian Johnson back in the fold.  Johnson got the boot from the band in 2016 after discovering he's suffered extensive hearing loss, but he's reportedly found a way around that.  Like we said, this is all speculation, but it would be nice to hear the band perform again.

Okay kids, that's going to do it for now.  While we wait for confirmation about that tour, let's have AC/DC close things out (with some help from Tony Stark) with, "Shoot to Thrill," for today's, "Song of the Day."

Thanks for stopping by, everyone.  It's always a treat to see you.  BDH and Little Buddha want you to know you're welcome to come back later to watch the Red Sox game with us.  They'd love to get your thoughts about the team (as well as tell you the rest of theirs.)  Otherwise, enjoy the rest of your day, be good, and we'll catch up with you again soon.  Until next time, that's today's Clearing out the Clutter, and we are outta here.