Welcome back, and a happy Friday to you all!  What's the plan for the weekend?  I think it's basically just survival here, given that the temperatures are supposed to be close to 100 degrees, with a "feels like" somewhere around 112 degrees.  Yikes.  I have to help Dad Clutter park cars for the big NASCAR race in NH on Sunday, so that should be an adventure.  BDH and Little Buddha remind me to bring my sunscreen and about 12 gallons of water.  Meanwhile, they'll hang out by the fan all weekend, because they're not fools.  Oh, that reminds me, we probably won't be back here again until Monday because of the race.  Anyway, let's see what's going on in today's headlines.  The guys say the coffee is ready, so grab yourself a nice medium DD, because it's time to clear out some Clutter.

Donald Trump tried to claim yesterday that he disapproved of the racist "Send her back!" chant that was directed at Representative Ilhan Omar at his rally on Wednesday.  Apparently Trump's blatant racism and fascism is starting to freak out even members of his inner circle, s they told him to blame it on the crowd.  Of course Trump's claim is nonsense, but the man is allergic to ever taking responsibility for any of his actions, so he's got no problem throwing his base under the bus.  The video of the event shows he did nothing to stop the chant, a chant which came from a tweet he sent earlier in the week.  Will this sad attempt to not seem like the Grand Wizard confuse his supporters, or will they just somehow rationalize it as "fake news?"  In any case, when will we learn more about Trump's relationship with pedophile Jeffrey Epstein? 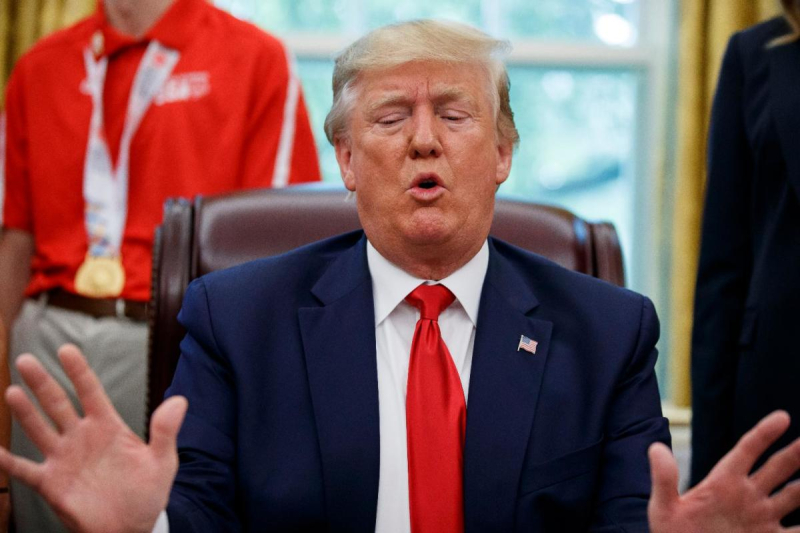 Trump will abandon anyone at any time to save his own skin.  (pic via usnews.com)

Speaking of Jeffrey Epstein, he was denied bail yesterday by a judge who ruled that prosecutors showed "clear and convincing evidence" that he's a flight risk before his upcoming trial on new sex trafficking and conspiracy charges.  It's unusual that someone that wealthy is refused bail, so it appears perhaps Epstein won't be granted any favors this time around.  We can only imagine how hard Attorney General William Barr has to work right now to keep Donald Trump's name out of the case.

Recently unsealed documents once again make it clear that were it not for a misguided DOJ policy regarding indicting sitting presidents, Donald Trump would be sharing a prison cell with Michael Cohen.  If only there were some other way to address crimes and misdemeanors committed by the White House occupant...

Can you guess the country's two most unpopular senators?  The answers will probably not surprise you.

Not sure if we're talking about politics or sports with this one:  The pairings for the next set of Democratic debates on July 30-31 were announced yesterday. Many Democratic voters will be interested in seeing Senators Elizabeth Warren and Bernie Sanders try to differentiate themselves from each other as they share the same stage on the 30th.  Meanwhile Senators Cory Booker and Kamala Harris will appear with former Vice-President Joe Biden (who can not afford as disastrous performance as he had in his first debate) on the 31st.

The streak is finally over - Chris Sale won a game at Fenway Park!  The Boston Red Sox beat the Toronto Blue Jays 5-0 to win their series yesterday.  Sale was in dominant form, giving up just two hits and two walks to go with 12 strikeouts over six innings.  He was helped by home runs from Rafael Devers (who continues to crush it at the plate) and Mookie Betts (who has been on a tear for his last 10 games.)  Yesterday was the first time in over a year that Sale has won a game at home, and here's hoping getting that monkey off his back gets him going on a roll.  A return to his consistently dominating form would be equivalent to the Red Sox making a major trade.  Next up, the Sox hit the road, and David Price starts things off by facing the Baltimore Orioles tonight.

A number of movie trailers dropped yesterday.  First, we've got Tom Cruise in Top Gun: Maverick, and we suddenly feel a need for speed:

Next, we've got Jay and Silent Bob Reboot from Kevin Smith.  We'll probably check this out in the theaters, although it's possible we'll wait for Netflix.  What about you?

Finally, we have a live-action Cats movie.  Not sure what to make of this trailer, although to be fair, that may have been the same reaction we had to the show:

We've got more film news:  Edward Furlong is returning to the role of John Connor for Terminator: Dark Fate.  Linda Hamilton also reunites with Arnold Schwarzenegger in the movie, so between that tidbit and all of these trailers, it feels like it's about 1985- 1992 around here at the moment.

Duff McKagan weighed in on why Guns N' Roses original rhythm guitarist Izzy Stradlin isn't part of the band's reunion tour.  From what we can gather it sounds like a combination of the group trying to low-ball Stradlin on his share of the profits, and perhaps Stradlin being a little on the flaky side.

Okay kids, that's going to do it for now.  We've clearly got no choice but to have Kenny Loggins close things out with, "Danger Zone," for today's, "Song of the Day."

Thanks for stopping by, everyone.  It was great to see you, as always.  BDH and Little Buddha hope you have a great weekend and remind you to stay safe in this insane heat.  Drink plenty of water, be good, and we'll catch up with you again on Monday.  Until next time, that's today's Clearing out the Clutter, and we are outta here.