As is true for so many fans of the show, Tom Baker was our introduction to Doctor Who.  The eccentric man with the booming voice, amazing curls, and trademark scarf provided the template for how we saw the Doctor.  To some extent, everyone who came after has been measured against the 4th Doctor.  We would sit mesmerized in front of the television for each of his adventures, and now some almost 40 years since he left the show, he's done it to us again.  This time, wee were glued to the new book: Doctor Who: Scratchman.  The story was originally conceived of as a movie by Baker and the late Ian Marter (aka Harry Sullivan) during their downtime on Season 12 in 1974-1975, and now Baker's turned the screenplay into a novel with help from co-writer James Goss.  The book was published in 2019, but it feels like something straight out of the classic era.

The tale begins with the Doctor being summoned to Gallifrey to account for his latest actions, something that seems to happen once every few hundred years for the Time Lord.  He tells the story of a trip that he, Sarah Jane Smith, and Harry Sullivan took to a seaside village on a island that may or may not be near Scotland.  Things are all fun and games for this group, but that never lasts long.  Sure enough, the Doctor and company quickly find themselves taking on animated scarecrows who used to be the island's residents.   It's a memorable adventure, and some readers readers will feel like they're sure they saw this on TV.  This situation is eventually resolved (although it's not an entirely happy ending.)  After that, things get weird.

The second half of the book finds the Doctor, Sarah Jane, and Harry fighting the force that was behind the scarecrows:  the dangerous Scratchman, a villain looking to escape his realm and join ours.  The problem is that he'll have to find out the Doctor's greatest fear in order to make his move.  The Scratchman is a dangerous opponent, but the Doctor will do whatever it takes to keep him in his current location.   We won't give away any spoilers about this part, but to give you a sense of the atmosphere, a major fight takes place in a giant pinball machine.

We've already stated our pro-Baker bias, but there's no disputing that he's done a brilliant job with this story.  It's told from the Doctor's perspective, and Baker has a terrific grasp of his iconic character and his companions.  The 4th Doctor's genius, optimism, kindness, arrogance, and humor shine through on every page.  The reader can feel the fondness that Tom Baker and Doctor have for Sarah Jane and Harry, as well as Elisabeth Sladen and Marter in real life.  The reader is given the treat of an extended trip deep into the TARDIS.  That alone could have gone for 300 pages, without complaint from this corner.    There's also a conversation between the Doctor and the TARDIS that will cause an involuntary smile.  Finally, there's an unexpected cameo that is delightful.

It's too bad that circumstances never allowed Scratchman to make it to the big screen or television.  It would have been an entertaining ride from start to finish.  Even a Big Finish audio adventure with Baker, Sladen, and Marter would have been a blast.  However, we appreciate that at least the book is finally available for everyone enjoy.  There's a good amount of fun to be had, but this is also a dark story with some adult themes.  Scratchman stands on its own as a terrific classic Doctor Who adventure, but the fact that it came from Tom Baker brings it to a different level.  Highly recommended. 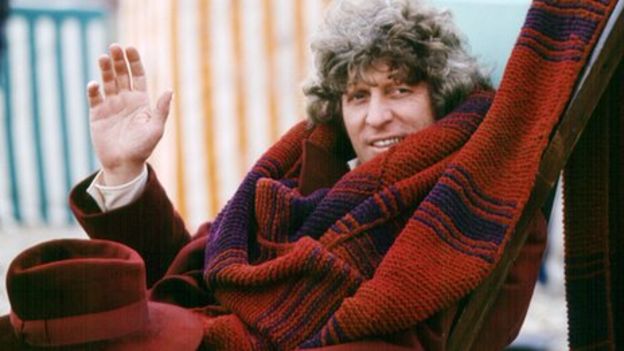 A fond tribute to the Doctor, by the Doctor.  (pic via www.bbc.com)