Welcome back!  How are you?  Still feeling a little out of sorts here, but yesterday was a productive day which was a great way to start the week.  I got all sorts of errands done, and it took about three minutes to fall asleep last night.  It was supposed to be raining this morning, but BDH and Little Buddha say now it's not going to start until somewhere around noon at the earliest.  I'm a little suspicious about whether it's going to happen at all, which is why I watered the garden yesterday.  In any case, the guys made coffee, so grab yourself a nice medium DD, and let's clear out some Tuesday Clutter.

Just to be clear (part 1)  - Donald Trump's top defense against the rape accusation made against him by E. Jean Carroll is, "She's not my type." It's not that he doesn't commit sexual assault (because we have a taped confession saying otherwise.)  It's that he didn't do it because she's not good-looking enough. Meanwhile, Carroll's accusation has gotten minimal coverage at best, because we live in a world where close to 20 women have now accused the White House occupant of assault, and it's just another day in Trump-land.

Just to be clear (part 2) - Donald Trump doesn't care if migrant children are being abused and neglected in his administration's concentration camps. In fact, that's pretty much the point.  The objective is to make these centers so miserable and terrifying that it scares people from coming to the United States in the first place. 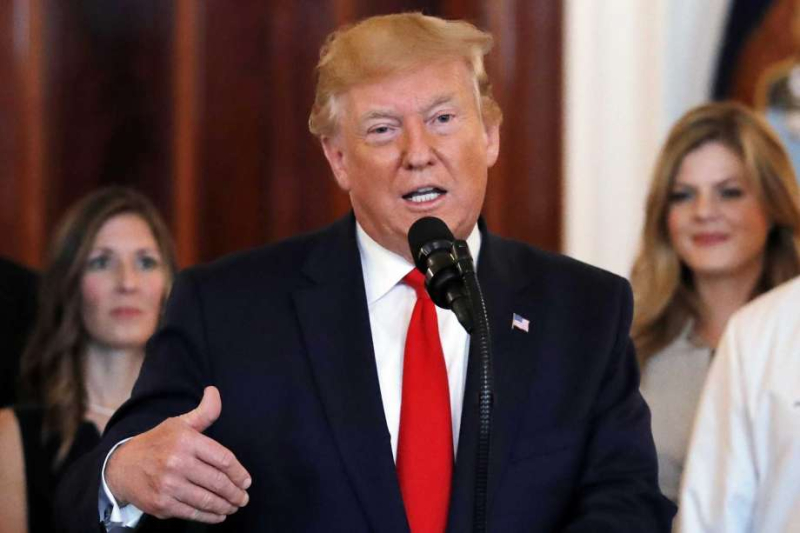 A threat to women, children, and everyone else.  (pic via nhregister.com)

Donald Trump said he'd make another Supreme Court nomination if given the chance anytime before the 2020 election. As he and Senate Majority Leader Mitch McConnell (R-Kentucky) have made clear, the supposed concern about allowing voters to weigh in before such a decision is made only applies to Democratic presidents.

Senator Jeanne Shaheen (D-NH) has at least one official Republican challenger for 2020.  Shaheen is the right choice for the Granite State, and voters should send her back for another term next year.

A new study says coffee might help you burn fat, which is just one more reason why it's the greatest beverage on the planet.  Anyone want another cup?  Just raise your hands, and BDH and Little Buddha will get you a refill.

We're pretty sure we recognize most Instagram advertising. Everyday people don't just sit around the house surrounded by 25 boxes of laundry detergent.  However, if you're getting paid to sponsor something, you should have to follow Federal Trade Commission guidelines and disclose it.  (For those who have wondered over the years, we don't get paid by Dunkin' to mention their coffee.  However, considering that we've given them free publicity around the world for almost 10 years, you'd think someone might throw us a free bag or something.)

Google is reportedly warning its employees they can march with the company in this weekend's San Francisco Pride Parade, or they can protest how YouTube deals with homophobic content creators, but they can't do both. It's a bad look for Google to apparently be concerned about offending the right-wing hatemongers.  YouTube likes to claim it's all about free speech, but that doesn't seem to apply to their staff.

The Boston Red Sox beat the Chicago White Sox 6-5 last night, thanks to a walk-off single from Marco Hernandez.  Eduardo Rodriguez gave up all five Chicago runs in 6 1/3 innings.  Boston was down at three different points in the game, but they kept battling and gave Hernandez the opportunity to play the hero by hitting a single with the bases loaded in the ninth inning.  That's got to feel especially good for the guy since he's finally back on the field after missing the 2018 season because of shoulder surgeries.  The Red Sox are back to six games over .500 (43-47), and tonight is David Price's chance to help get them to seven games when he takes the mound against Chicago.

A new report says New York Mets general manager Brodie Van Wagenen has made some in-game pitching decisions this year.    If that's true, we can't imagine how anyone in that clubhouse has any respect for manager Mickey Callaway.  It's one thing for front office staff to be involved with roster construction (normal) and maybe weighing on on the lineup (a little pushy), but if your manager isn't calling the shots during the nine innings, he's a puppet at best.

Country music legend Willie Nelson has a new album out this week. We've said this before, but if you ever get the chance to see the 86-year-old live in concert, you should do it.  He's got an incredible warmth as a performer, and he's also an amazing guitarist.

Clutter favorite David Tennant talked about what it was like working with Michael Sheen on the new Amazon series Good Omens.  If you haven't already watched the show, block off six hours, settle in, and you'll thank us when it's over.

Roseanne Barr and Andrew Dice Clay are teaming up for a comedy tour this summer.   Will the MAGA crowd eat this up with a spoon, or will these two shut it all down after three shows?

Okay kids, that's going to do it for now.  Let's have Sixpence None the Richer close things out with, "There She Goes," for today's, "Song of the Day."

Thanks for stopping by, everyone.  It was great to see you as always.  Hmm, looks like it's getting a little cloudy out there.  Enjoy the rest of your day, stay dry, and we'll catch up with you again for more fun soon.  Until next time, that's today's Clearing out the Clutter, and we are outta here.