Welcome back!  Come on in, have a seat.  BDH, Little Buddha, and I were just talking about last night's Democratic presidential debate.  We'll get into it in more detail in a second, but everyone here agreed we wished it had started an hour earlier so we could have gotten a little more sleep.  Oh well, those are the sacrifices one makes to be an educated voter.  In other news, the guys want to make sure you know that they are now on Instagram. We don't have many pictures up yet, but there will be more to come, so follow us and see where they go next!  In the meantime,  the coffee is ready, so grab yourself a nice medium DD, and let's clear out some Thursday Clutter.

The first of two Democratic presidential debates this week took place last night. Our immediate reaction is that (in order) Senator Elizabeth Warren (D-MA), former Housing and Urban Development Secretary Julian Castro (D-Texas) and Senator Cory Booker (D-NJ) had the best performances, and then everyone else was a bit of a wash.  Beto O'Rourke (D-Texas), who looked like he hadn't slept in two months, seemed to catch everyone off-guard when he answered a question in Spanish, which then led to other candidates following suit.

The evening was an exciting reflection of the fact that the Democratic Party represents a United States that isn't entirely rich old white men.  What was also striking was that while the candidates offered varying degrees of subject matter expertise and willingness to fight for significant change in this country, this was a reality-based political debate that didn't feature one candidate bragging non-stop about how terrific they are and how much they love various dictators around the world.  We'd like more of that please, and we'll likely get it when the second round of the debates takes place tonight. 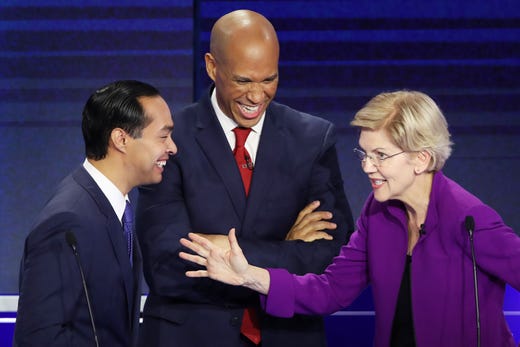 The winners of the night.  (pic via usatoday.com)

Good for Bank of America for announcing they will no longer work with the companies who operate detention centers around the country.  Other companies should follow their lead.  If basic human decency won't stop these people, let them feel economic pressure for being on the wrong side of history.

Senator Lindsey Graham (R-SC) has been busy being Donald Trump's lapdog for the last two years, and he's being rewarded at home for it.

Prince William said he would be "absolutely fine" with it if one of his children came out as gay, although he worries about a potential backlash from the public.

The homophobic so-called "Straight Pride Parade" will be apparently be happening in Boston on August 31.  We'll enjoy not being anywhere the obnoxious event.

A new study shows that the HPV vaccine has been even more successful than previously believed. A FDA advisory panel now suggests that the vaccine be given to both men and women up to age 26.  Parents, get your kids vaccinated.  This is a no-brainer:  The vaccine reduces your chances of getting HPV-related cancers.  It's that simple.

The Boston Red Sox lost 8-7 to the Chicago White Sox in a brutal defeat on Thursday. Chris Sale was a mess coming out of the gate, giving up a quick three runs in the first inning.  He went on to surrender a total of five runs in six innings against his former team.  The Sox were down 6-4 after seven innings, but a three-run eighth inning, highlighted by a two-out single from Xander Bogaerts, gave them the lead.  It was a lead that Matt Barnes promptly gave away with a two-run home run from Jose Abreu in the top of the ninth.  The Sox are now in London for their weekend series against the New York Yankees.  Rick Porcello will take the mound for the Sox on Saturday.

We're at the half-way point of the season, and at this rate, the Sox would end up with a record of 88-73 for the year.  That sounds about right at the moment.  This is a talented team, but a number of players will need to step up if the Red Sox are going to make a playoff run.  As far as the offense goes, Mookie Betts, JD Martinez, and Andrew Benintendi all need to heat up in the second half.  On the pitching side, while they're not as god-awful as they were at the start of the season, the starters need to go deeper.  The team could use a real closer, but the entire bullpen seems like it could tire in the back half of the year because of (necessary) over-use in the first 81 games.

In a move that doesn't surprise anyone, Kevin Durant is reportedly declining his player option for next year for $31.5 million and will become an unrestricted free agent.  Durant could make more money if he stays with the Golden State Warriors, but is he looking for a change of scenery? There's also the question of how his recent Achilles injury will factor into his decision-making process, as he's expected to miss all of next season.  Rumors continue to fly, but NBA free agency begins at 6 p.m. on the 30th, so hopefully we'll get an answer about where he and Kyrie Irving are going soon.

Sorry to hear that ESPN anchor Bob Ley is retiring at the end of the month after just about 40 years with the network.  He always felt like a reassuring presence and a class act.  We wish him the best with his future endeavors.

Also sorry to hear that actor Max Wright died yesterday.  Wright, who was best known for his starring role on ALF (a show he apparently disliked), was 75 years old.  Our condolences go out to his family, friends, and fans.

NBC will pay $500 million to get The Office away from Netflix for five years, starting in 2021. It seems like everyone is starting their own streaming services, so the battle is on for old and new content.  It will be interesting to see if Netflix can maintain its dominant positioning in the face of all the oncoming competition.  We'll have to figure out how much we're willing to budget for all of this.  Netflix already feels a little overpriced, and we're not going to pay 10 providers for the ability to watch reruns.

Good for General Hospital for giving the character of Bobbie Spencer a diabetes diagnosis storyline.  It's a chance for the soap opera to raise awareness of the issue, and it also gives veteran actress Jacklyn Zeman an extended spotlight.

Okay kids, that's going to do it for now.  Here are the Red Hot Chili Peppers to close things out with a live performance of, "Dark Necessities," for today's, "Song of the Day."  (There's an extended jam at the beginning, but Anthony Kiedis begins singing at the 4:30 mark.)

Thanks for stopping by, everyone.  It was great to see you, as always.  BDH and Little Buddha say you're welcome to come back and watch the second night of the debates with us if you like.  Otherwise, enjoy the rest of your day, be good, and we'll catch up with you again for more coffee soon.  Until next time, that's today's Clearing out the Clutter, and we are outta here.