Welcome back!  Come on in, have a seat.  How are you?  Did you get the thunderstorm we had here last night?  That was something.  I had the window open just a crack, and the wind coming through was still strong enough to change the temperature of my bedroom.  BDH and Little Buddha thought it was all fascinating.  I was mostly just glad we didn't lose power.  I think it's supposed to rain more this afternoon, so I guess I won't have to water the garden again for at least a few days.

Speaking of which, we're starting to get some color around here as the flowers begin to appear, which is always a treat.  Hold on, I'm being told to move things along.  We still need to water the houseplants before this morning's Red Sox game.  The guys say the coffee is ready, so grab yourself a nice medium DD, and let's clear out some Sunday Clutter.

Donald Trump walked into North Korea this morning for another meeting with his favorite crush, Kim Jong Un.  Trump has failed to get North Korea to do anything about their nuclear stockpile, but he gave the dictator the free publicity anyway.  Nothing like getting a reward without having to do any work.   If Barack Obama had done this, the GOP would have had him impeached and removed from office before he came back to this country.   What do we think the odds are that Kim has given Trump permission to build a hotel in North Korea, or has paid him in some other way to fawn over him like this? The alternative theory is that Trump thinks the photo op will somehow get him a Nobel Prize.  In any case, it's yet another embarrassing day for the United States. 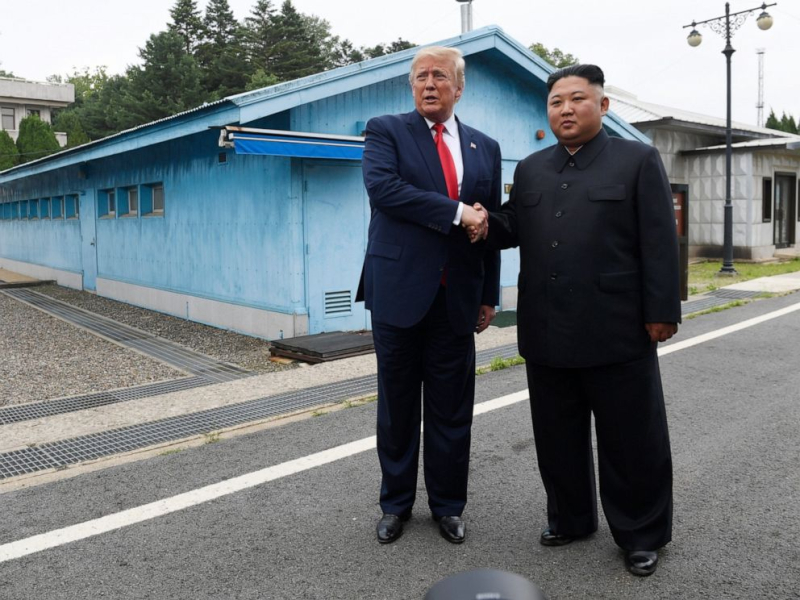 A national disgrace.  (pic via abcnews.go.com)

Trump may be busy fawning over Kim right now, but he still had plenty of time to help Saudi Arabia's Crown Prince Mohammed bin Salman rehabilitate his public image at this week's G20 Summit. The prince has been outed as the mastermind of the murder of an American resident, but as long as Trump is getting his money, there's no problem here.

Meanwhile, a Trump supporter created a fake Joe Biden website, and some Democrats apparently fell for it.  This is the same kind of social media misinformation that Russia pushed in 2016, and we can not be naive enough to swallow it hook, line, and sinker again.

ICYMI - SNL star Kate McKinnon was on Late Night with Seth Meyers after the second night of the Democratic presidential debates, and she unveiled her brand new Marianne-Williamson impersonation.  Long story short, McKinnon is a national treasure:

It's surprising and troubling to hear that less than 40% of all Americans have ever gotten a HIV test. Come on now, folks, there's no excuse for this.  Everyone needs to know their status and to be able to share that with their sexual partners.  Plus, early detection is critical to management if a person tests positive.  Let's be healthy out there.

A consumer advocacy group is pushing for alcoholic beverages to have warning labels regarding a link between booze and cancer. Can't remember if we already knew about the connection or not, but the CDC says 90,000 Americans are diagnosed each year with cancers that are related to alcohol consumption.

The Boston Red Sox lost 17-13 to the New York Yankees in London yesterday.  That's a football score, not a baseball score.  Rick Porcello was shelled for six runs in 1/3 of an inning and buried the Red Sox right out of the gate.  The only thing that saved him was Masahiro Tanaka also gave up six runs in the bottom of the first.  After that, both offenses went on a run for the rest of the day, with New York coming out on top at the end.  We have to give a shout-out to Chris Chavis.  The Red Sox first baseman had two two-out/three-run home runs to help keep Boston in the game.

U.K. fans will be disappointed if they think every baseball game has 30 runs of offense and 37 combined hits, but they also might appreciate that most games don't last 4 hours and 42 minutes.  The loss drops the Red Sox to 10 games behind the Yankees in the AL East, and the pressure is once again on Eduardo Rodriguez to give Boston some innings today after the team burned through seven relievers on Saturday.  The Boston bullpen could obviously use some help, but it's going to be a moot point if the Red Sox starters don't get it together and consistently go deeper into games in the second half of the season.

It still appears that Kemba Walker will be joining the Boston Celtics once NBA free agency begins at 6:00 tonight.  It's been a rough year for the C's, but the future still seems to look okay.  The Celtics have a talented and young core roster, and if you add Walker, and hopefully a further-recovered Gordon Hayward, the team should still be talking about the playoffs next season.

Meanwhile, it also seems clear that Kyrie Irving is about to join the Brooklyn Nets, to which we say, good riddance and good luck to that organization.  Irving is expected to sign a four-year/$141 million contract, and we give it two years at most before he turns into a headache for the team who wants out of town.

Has anyone here ever watched Man v. Food? We used to watch it somewhat regularly when Adam Richman was the host, and still occasionally catch an episode that features Casey Webb.  There's something oddly entertaining about watching a guy try to eat a 10 lb burger loaded with 5 lbs of ghost peppers and 15 lbs of french fries in under an hour.

Okay kids, that's going to do it for now.  Here are the Black Crowes to close things out with, "Twice as Hard," for today's, "Song of the Day."

Thanks for stopping by, everyone.  It was a treat to see you, as always.  Enjoy the rest of your day, try not to get caught in this afternoon's storms, and we'll catch up with you again for more fun soon.  Until next time, that's today's Clearing out the Clutter, and we are outta here.