Welcome back!  Come on in, have a seat.  How is the official start of summer treating you so far?  No complaints here.  Dad Clutter and I were at Friday's Boston Red Sox game and enjoyed that dramatic win over the Toronto Blue Jays.  If you watch the video of Christian Vazquez's walk-off home run, you'll see the ball bounced out of the Boston bullpen and into the bleachers about 20 feet to our right.  That's the closest a ball has come my seats so far, so the dream of someday catching one is still alive!

We're still waiting for most of the flowers in the garden to start blooming.  I think the cold spring threw off their timing, but BDH and Little Buddha think they'll be here soon.  Other than that, it's business as usual.  The guys made coffee, so grab yourself a nice medium DD, and let's clear out some Sunday Clutter.

Advice columnist E. Jean Carroll says that Donald Trump raped her in late 1995 or early 1996, and the reaction seems to be....crickets. Our norms have been so shattered, that this sounds like just another day in Trump-land.  Trump denied the allegation and said he's never met Carroll, a lie which was quickly disproved.

We're living in a world where the Department of Justice argues that it's "safe" and "sanitary" to keep undocumented kids locked up in concentration camps without soap or toothbrushes and to make them sleep on concrete floors. If a parent did that to their kid, child protective services would remove them in the blink of an eye.  The complete lack of basic decency in the DOJ claim is enough to cause thoughts of heavy morning drinking, but instead, reach out to your elected officials and express your outrage at these conditions.   (You can use the links under the "Clutter Favorites" section on the right-hand side of this page to find their contact information.) 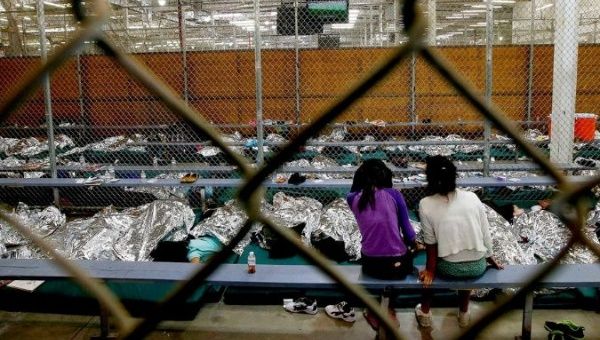 This is inhumane. (pic via telesurenglish.net)

Donald Trump announced the temporary halting of mass immigration raids that were reportedly supposed to start today. The reasons for the pause range from Trump claiming Democrats asked him to do it, to ICE not really having any plans for how they were going to handle the undocumented immigrants they were ready to arrest, to who knows, perhaps Trump just getting off on mentally torturing this vulnerable population.  The man lives to create chaos, only to then pause said chaos, and then take credit for "solving" the problem he created in the first place.

Do you think it was physically uncomfortable at all for Senator Marco Rubio (R-Florida) to become a Trump lapdog like Lindsey Graham, or did he just slide into the role without missing a beat?

Former vice-president Joe Biden tried to claim a "100% voting record" on reproductive health at a voter forum sponsored by Planned Parenthood, but his actual record says different. Biden has generally drifted towards a more pro-choice record as the years have gone by, but voters who are looking for a champion on this issue, especially in light of the current anti-choice onslaught around the country, should be looking elsewhere.  Also, Biden has to know that the "100%" claim is blatantly false.  Does he have a touch of a Trumpian relationship to the truth?

Saturday was an ugly day at Fenway Park, as the Boston Red Sox lost 8-7 to the Toronto Blue Jays. The Sox had a 6-1 lead after six innings, but the bullpen fell apart and allowed Toronto to score four runs in the 7th and another three in the 8th to grab the victory.  We're not going to overreact (at the moment), but the Sox now have 15 blown saves as we approach the midpoint of the season.  Dave Dombrowski  has to find a solution if this team is going to make a serious run this year.  In the meantime, Rick Porcello takes the mound for the Red Sox as they try to win their series against the Blue Jays this afternoon.

Big Papi News Desk:  It's great to hear that David Ortiz has been moved out of the ICU as he continues to recover from the injuries he sustained after being shot on June 9.  Meanwhile, skepticism continues to grow over the official story that Big Papi was the victim of mistaken identity.

The Rolling Stones are back in action, following Mick Jagger's recovery from heart surgery in April.  Doesn't sound like they've missed a beat.

Okay kids, that's going to do it for now.  Let's have Snoop Dogg close things out with a bit of summer vibe and some "Gin & Juice" for today's, "Song of the Day."

Thanks for stopping by, everyone.  It was great to see you, as always.  Enjoy the rest of your day, be good, and we'll catch up with you again for more fun and coffee soon.  Until next time, that's today's Clearing out the Clutter, and we are outta here.

Posted by Colin Moore at 08:21 AM in Current Affairs, Music, Sports | Permalink | Comments (0)