Welcome back, and a happy Friday to you all!  I was just telling BDH and Little Buddha that the next time I'm supposed to stay home to sign for a package, I'm just going to have it rerouted to the local holding place and pick it up a day later.  I don't know why I thought it might come early yesterday, but the UPS guy didn't show up until 7:30.  It was not what we would call a "great use of time," but live and learn I guess.

Now I have something else to pick up today, and it looks like I'll need my umbrella, because it's supposed to rain until right before the start of the Red Sox game.  However, BDH and Little Buddha think we should check out the headlines before I go outside.  They also think we could all use some coffee.  I tell you, these two are geniuses.  There's a fresh pot on the counter, so grab yourself a nice medium DD, and let's clear out some Clutter.

Donald Trump reportedly ordered a limited military strike against Iran and then changed his mind at the last minute on Thursday night.  No definitive word on why the change of plans, but having a guy with a massive inferiority complex who is being goaded into war by his advisors, and who constantly needs a distraction from all of his legal and political problems, in charge of our military, is frightening. 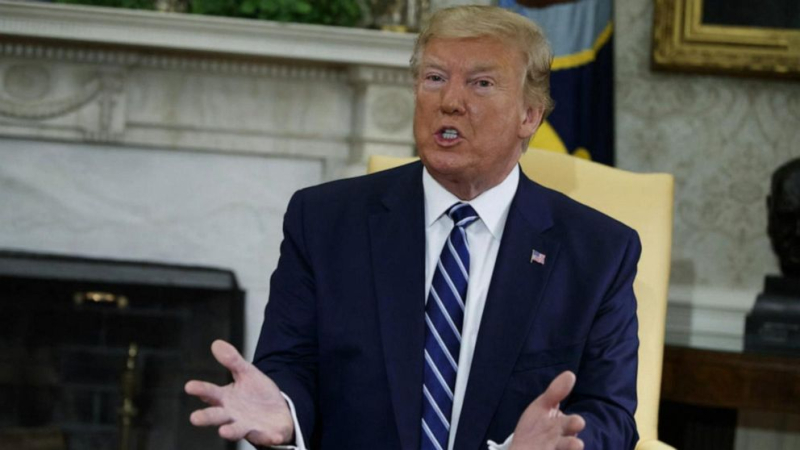 Will Donald Trump start a war to save himself?  (pic via abcnews.go.com)

Look at that:  The Senate passed three resolutions blocking arms sales to Saudi Arabia yesterday. So Republican senators can stand up to Donald Trump every once in a blue moon, although these resolutions are all expected to be vetoed without an override, so it's more of a light rebuke than anything else.

Republicans don't want anything to do with Roy Moore running for the Alabama Senate seat again. Not that they particularly care about his involvement with underage girls per se, it's just that they know Moore would be a gift opponent for Senator Doug Jones.  We're also interested in hearing more about Senator Martha McSally's comment about a Moore run.  Her response to the news?  “Give me a break. This place has enough creepy old men.”  Care to name names, Senator?

The S&P 500 hit new highs yesterday, as Wall Street continues to think an interest rate cut is imminent.  Their record of predicting said cuts is poor, but in any case, the Clutter investment team plans on taking a vacation, because they're not seeing any bargains at these levels.  The staff left the auto-buying program on, changed their voicemail, and said something about spending more time in the garden, as they walked out the door.

The Boston Celtics were busy at the NBA Draft on Thursday night. They selected Indiana guard Romeo Langford with the 14th overall pick, traded center Aron Baynes to the Phoenix Suns, and also drafted Grant Williams and Carsen Edwards.  How do you feel about these moves, Celtics fans?  Will they help you put last season in the rear view mirror?

The Tampa Bay Rays are apparently exploring the idea of splitting their home games between Florida and Montreal. We must be missing something, because that makes no sense.  The Rays pull in embarrassing attendance numbers year in and year out, no matter how good their team is in a given year, so it' no surprise that they'd want to go somewhere else.  However, how does splitting the games make any sense, unless it's this whole thing is just a tool to  help them break their lease (which expires in 2028)?

20,000 people signed a petition calling for Netflix to cancel Good Omens, the tremendous new series starring David Tennant and Michael Sheen as a demon and an angel who team up to try to prevent the apocalypse.  Apparently the petitioners feel that the series:

"is “another step to make satanism appear normal, light and acceptable”, and “mocks God’s wisdom."   God, they complain, is “voiced by a woman” – Frances McDormand – the antichrist is a “normal kid” and, most importantly, “this type of video makes light of Truth, Error, Good and Evil, and destroys the barriers of horror that society still has for the devil."

Religious intolerance aside, the funny part is that the show was made by Amazon Prime Video, not Netflix.

The final Stranger Things 3 trailer is out, and it looks like things are getting dark.  Have a look:

It's always fun to lose yourself in the YouTube rabbit hole and check out some old music videos now and again.  The problem is that some of the clips look and sound like they were taken off video cassettes in 1980.  That's why we're pleased to learn that YouTube Music and Universal Music Group will clean up almost 1,000 videos over the next year. If you click on the link, you'll see the upgraded Beastie Boys "Sabotage" video as an example, and it's impressive.  It will be fun to see these roll out over the next 12 months.

Okay kids, that's going to do it for now.  Let's have the Mighty Mighty Bosstones (and some cute friends) close things out with a live performance of, "The Impression That I Get," for today's, "Song of the Day."

Thanks for stopping by, everyone.  It was great to see you, as always.  Enjoy the rest of your day, stay dry, and we'll catch up with you again for more shenanigans soon.  Until next time, that's today's Clearing out the Clutter, and we are outta here.