Welcome back, and a happy Friday to you all!  Everyone here was up past our bedtimes again for the second night of the Democratic presidential debates. We're tired, but it was worth it to see these folks in action.  More on that in a minute.  Any big plans for the weekend?  It looks like it's supposed to rain both days, so the main thing here is probably watching the Red Sox take on the Yankees in London.  For right now, the sun is shining, the birds are chirping, and BDH and Little Buddha say the coffee is ready.  Grab yourself a nice medium DD, and let's clear out some Clutter.

Senator Kamala Harris (D-California) was the clear winner of the second round of Democratic presidential debates this week.  Thursday's event, much like the night before, gave voters 10 Democrats to choose from, and the choices ranged from Bernie Sanders, Joe Biden, and Harris, to several people who should be wrapping things up soon.  Also like Wednesday, the evening was based in reality, as all of the men and women made their cases, which is a welcome change from the current White House occupant.

However, the defining moment of the night, and perhaps the election cycle so far, was Senator Harris eviscerating former Vice President Joe Biden for highlighting his ability to find common ground with infamous segregationists.  Harris gave Biden a chance to move on from his anti-busing votes in the Senate, and Biden did not handle it well at all.  His response to Harris (who rode those buses as a young girl) was petulant and angry.  Biden failed to acknowledge her humanity in that situation.  He came across as self-pitying as he defended voting against anti-federal busing efforts, saying it was a local issue.  The optics of the white guy "mansplaining" busing to an African-American woman were awful, and that's not going away anytime soon. 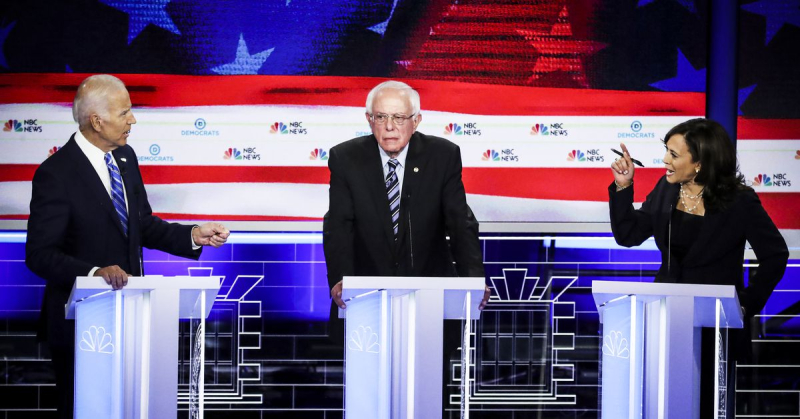 The defining moment of the evening.  (pic via vox.com)

As far as everyone else is concerned, none of them really moved the needle either way last night.  Senator Bernie Sanders (I-Vermont) deserves a lot of credit for pushing the Democratic field to the left since 2016, but he's the wrong messenger at this point, and Democrats will eventually coalesce around someone else.  Speaking of coalescing, now that we've got these debates out of the way, how about some of these folks close up shop so we can focus on everyone who actually has legs?  We're looking mainly at the 5-6 guys across the two evenings who failed to get us to remember their names even after 50 appearances on the TV screen.  Move it along, fellas.

Donald Trump managed to anger someone new this week.  (You'd think he'd be running out of possibilities at this point.)  Sharon and Ozzy Osbourne sent Trump a letter telling him to stop using Ozzy's music without permission.  This comes after Trump tweeted out a video mocking his Democratic opponents that was set to the classic tune, "Crazy Train."  Making the "Prince of Darkness" mad is one thing, but we've always been under the impression that you do not want to be on Sharon's bad side, so the Great Pumpkin better go ask Kid Rock if he can use one of his songs in the future.

The United States Supreme Court put the proposed citizenship question on the 2020 census on hold, basically declaring that the Trump administration's rationale was too lazy and thin for them to go along with, which is saying something.  The ruling was yet another 5-4 decision, with Chief Justice John Roberts siding with the liberal justices, as he continues to assume the swing role in certain cases.  Really, this boils down to Roberts once again trying to preserve the legitimacy of "his" court.  Opponents of the question say the forms need to be printed now, so that should be the end of the case.  However, Trump would like to postpone the census until his blatant attempt at intimidation and under-counting of minorities and immigrants can be approved.

The Supreme Court also ruled in another 5-4 decision that federal courts have no role in addressing partisan gerrymandering efforts, because really, why would the courts care if political parties are trying to weaken democracy?

It's outrageous that a pregnant African American woman who was shot in the stomach during a fight in Alabama has now been charged with manslaughter due to the death of the fetus.  It's also a reminder that the anti-choice movement is all about punishing women at every opportunity, and if that means blaming them for being victims of violence, so be it.

Apple's chief design officer Jony Ive is leaving after 20 years with the company. Ive was responsible for the look and feel of basically every Apple product since 1999, and it will be interesting to see how that impacts things going forward.  On the other hand,  Apple will still be a client of Ive's as he opens his own business, so maybe we won't even notice much of a difference.

Cheers to the Boston Celtics who are reportedly hiring former WNBA star Kara Lawson to be an assistant coach.  Lawson will be the first woman to serve in that capacity in the team's history.

The upcoming Charlie's Angels reboot is here, and it looks pretty amazing.  Have a look:

Good news, One Day at a Time fans, the show has been picked up by Pop TV after being cancelled by Netflix earlier this year.  New episodes are scheduled to air in 2020.

If anyone finds themselves missing Seinfeld something fierce, you should click here.

Sorry to hear that Steven Adler is in the hospital after reportedly stabbing himself.  His injuries are being described as non-life threatening.  We hope the former Guns N' Roses drummer recovers soon and gets whatever help he needs.

Okay kids, that's going to do it for now.  Pretty sure Ozzy and Sharon Osbourne won't get mad at us for this - let's close things out with "Crazy Train" for today's, "Song of the Day."

Thanks for stopping by, everyone.  It was great to see you, as always.  Not sure what we're going to do without a Red Sox game tonight, but BDH and Little Buddha say you're always welcome to come back and hang out later if you like.  Otherwise, enjoy the rest of your day, be good, and we'll catch up with you again soon.  Until next time, that's today's Clearing out the Clutter, and we are outta here.