Welcome back!  Come on in, have a seat.  How are you?  I'm a little beat up at the moment.  The Red Sox ended up playing last night, but I didn't really dress properly to deal with the wind or rain, so there might have been some involuntary shivering for the second half of the game.  Oh, and there was also a rain delay which led to me being up well past my usual bedtime.  It takes a lot of rest to keep this machine moving, friends.  However, the company was great, and we picked up some commemorative 2013 championship rings which I have every intention of claiming are real at some point down the road.  As for the more immediate future, let's check out today's headlines.  BDH and Little Buddha brought in a fresh pot of coffee, so grab yourself a nice medium DD, because it's time to clear out some Wednesday Clutter.

Senate Majority Leader Mitch McConnell said yesterday that he'd have no problem confirming anyone Donald Trump might nominate to the U.S. Supreme Court in 2020 even though it's an election year. His concern for the voters to weigh in on a presidential race before taking such an action only applied to when Barack Obama was in office.  In other words, Mitch McConnell stole a U.S. Supreme Court seat in 2016, and he'd do it again if given the chance.  It can't be understated how much damage McConnell has done to democracy in this country, from the Supreme Court, to enabling Russian election interference in 2016, and helping Trump's cover-up ever since then. 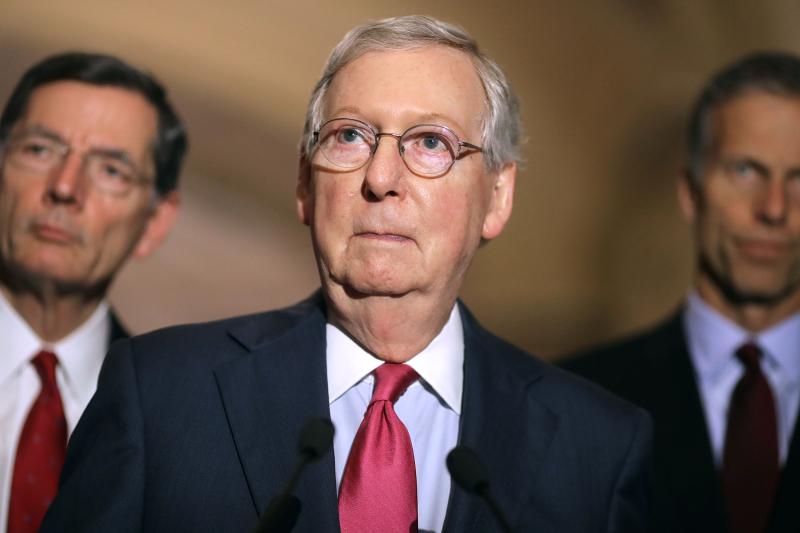 Never misses an opportunity to harm the United States.  (pic via time.com)

Supreme Court Justice Ruth Bader Ginsburg remains a liberal lion, and if Democrats find a way to blow it in 2020, we're going to need her to stay on the bench for about another 20 years.

Cheers to Gillette for airing an ad that shows a father teaching his transgender son how to shave. Representation matters.

As we mentioned earlier, there was some rough weather at Fenway Park last night, and then there's the matter of the game itself.  The Boston Red Sox lost 7-5 to the Cleveland Indians, when Boston's bullpen coughed up five runs in the ninth inning.  David Price had a dominant performance in the rain, giving up just three hits and no runs over six innings.  However, Marcus Walden didn't look great, giving up two runs in 1/3 of an inning.  Matt Barnes was okay, but Ryan Brasier gave up three runs in the ninth without recording an out, as Cleveland tied the game, and Travis Lakins gave up the final two runs (along with three walks) to give the Indians the margin of victory.  It was a painful evening, but the Red Sox have to try to regroup and see if they can win the series tonight, as Ryan Weber takes the mound against the Indians.

The Boston Bruins look to take a 2-0 series lead against the St. Louis Blues in tonight's Stanley Cup match-up, and we are definitely going to need a nap before that happens.

The Oakland Raiders signed Richie Incognito to a one-year deal yesterday. Incognito is well-known for his involvement in a bullying scandal a few years ago, but he apparently had multiple off-field incidents last year where it's lucky no one was seriously hurt.  He may well need serious help with his mental health, and instead, he's playing football for the Raiders.  What could possibly go wrong?

Netflix has a four-part series coming about the "Central Park Five," a group of five African American and Latino teenagers who were convicted of a rape they didn't commit.  There's a lot of ground to cover in that series, including Donald Trump calling for the kids to receive the death penalty back when the incident happened in 1989.  Has anyone asked him about that since he's been in the White House?  When They See Us comes out on Friday.  Here's the trailer:

We've also got the first trailer for the final season of Jessica Jones, which comes out on June 14.  Take a look:

Okay kids, that's going to do it for now.  Here are the Go-Go's with a cover of the Ramones classic, "I Wanna Be Sedated," for today's, "Song of the Day."

Thanks for stopping by, everyone.  It was great to see you, as always.  BDH and Little Buddha say you're welcome to come back and watch hockey with us tonight.  They love watching the guys fly up and down the ice.  Otherwise, enjoy the rest of your day, be good, and we'll catch up with you again for more fun soon.  Until next time, that's today's Clearing out the Clutter, and we are outta here.