Welcome back!  Come on in, have a seat.  How are you?  We're dragging here a bit right now.  Our crew stayed up for Game 1 of the Stanley Cup Finals, and it's hard to fall asleep right after all of that excitement!  It's partly sunny out at the moment, but it's supposed to rain for most of the day today.  That's great for the garden, but not so much for tonight's Red Sox game.  If the forecast is accurate, I hope it rains hard enough for the Sox to announce a postponement early, so I'm not wondering about my plans all day.  Anyway, we'll deal with that later.  BDH and Little Buddha say the coffee is ready, so grab yourself a nice medium DD, because it's time to clear out some Tuesday Clutter.

Vice President Mike Pence told West Point graduates over the weekend that it was a "virtual certainty" they would serve in combat at some point in their lives. It should terrify everyone that this country's military is subject to the whims of Donald Trump's financial interests and desire to stay in office and avoid indictment.

The Boston Bruins beat the St. Louis Blues 4-2 in Game 1 of the Stanley Cup Finals last night. Boston looked a little rusty at first after an 11-day layoff, and they found themselves down 2-0 going into the start of the second period.  However, the B's found their legs shortly after that and roared back in front of their home crowd at the TD Garden.  They outplayed the Blues by a much larger margin than the score indicates.  A special shout-out to Bruins defenseman Torey Krug who earned a permanent place in Boston sport history when he destroyed Blues center Rob Thomas after David Perron assaulted Krug (and ripped off his helmet) in front of the Bruins goal right before that.  (Apparently we can't embed the video, but check this out if you haven't already seen it.)  Game 2 is tomorrow night in Boston, as the Bruins look to build on last night's momentum.  We're going to need a nap first. 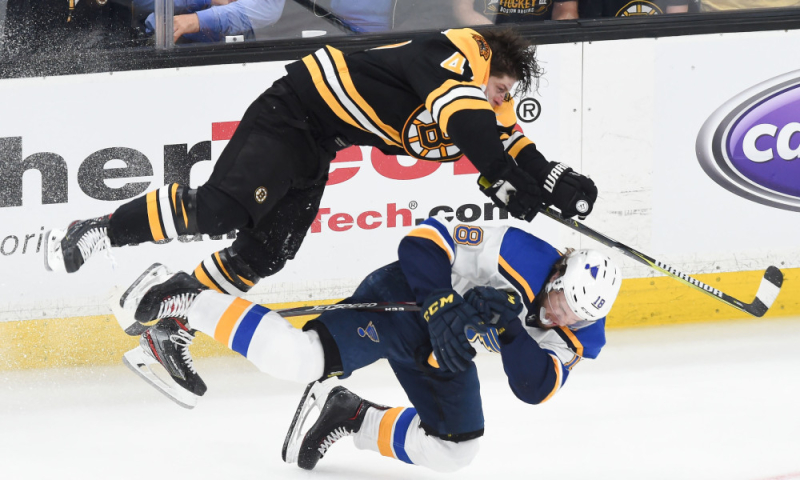 Torey Krug delivered a hit for the ages last night.  (pic via usatoday.com)

The Boston Red Sox beat the Cleveland Indians 12-5 yesterday. Rick Porcello gave up the five runs (three earned) over 6 2/3 innings for Boston.  The game was tied 3-3 until the Red Sox broke out for six runs in the fifth inning, led by catcher Sandy Leon hitting a three-run blast for his second home run of the season.  J.D. Martinez got in the fun by adding two solo home runs of his own.  It was also good to see Brock Holt back on the field after missing the last few weeks with a scratched cornea.  David Price is scheduled to take the mound for the Sox tonight as they try to win this three-game series against the Indians.

Boston Red Sox second baseman Dustin Pedroia announced at a press conference yesterday that he's taking a leave from baseball to reevaluate his future after suffering multiple setbacks involving his surgically-repaired left knee.  The Red Sox moved Pedroia to the 60-day IL while he contemplates his next step.  The 35-year-old Pedroia wouldn't say he was retiring, but it seems likely at this point.  We'll hold off on the full career review until he makes an official announcement.  However, anyone out there foolish enough to criticize the guy for this pause doesn't know the first thing about baseball.  Pedroia has dedicated his life to baseball and to the Red Sox.  He always gave 100% and performed at a high level for most of his career.  He deserves the opportunity to go out on his terms.

We're sorry to hear that Bill Buckner died yesterday from Lewy Body Dementia. Of course the former Boston Red Sox first baseman was well known for the error that he made in Game 6 of the 1986 World Series.  However, let's not forget that he had a solid 22-year career in the majors, where he amassed 2715 total hits and had a lifetime .289 batting average.  Buckner never should have been in Game 6 at that point to begin with, given his ankle injuries.  In any case, it seemed like he and Boston made peace with each other after the Sox won the 2004 World Series, and the Red Sox had him throw out the first pitch for the 2008 home opener to a standing ovation.  We're also sorry to hear that Lewy Body Dementia was involved.  That's the same condition Robin Williams was diagnosed with after his death, and it sounds terrible.  Bill Buckner was 69 years old.  Our condolences go out to his family, friends, and fans.

Best wishes for a full and speedy recovery to Cleveland Cavaliers owner Dan Gilbert who suffered a stroke on Sunday.

There's an extended Captain Marvel scene where she puts a cat-caller in his place, and apparently some guys are freaking out about it. These are sad little boys who don't have the nerve or capacity to have an actual conversation with a woman in real life, but man can they talk some trash from a keyboard.

It's surprising to hear that Megadeth bassist/co-founder David Ellefson was demoted to a salaried employee when he rejoined the band back in 2010.

Okay kids, that's going to do it for now.  Memorial Day brought the unofficial start of summer, so let's celebrate by having Bryan Adams close things out with a longtime favorite, "Summer of 69," for today's, "Song of the Day."

(Let's also not discuss the fact that the aforementioned summer of 69 now happened 50 years ago.)

Thanks for stopping by, everyone.  It was great to see you, as always.  Enjoy the rest of your day, stay dry (if the forecast is correct), and we'll catch up with all of you again for more fun soon.  Until next time, that's today's Clearing out the Clutter, and we are outta here.