If you need a quick break from the raging dumpster fire that is the country these days, the Lonely Island guys have just the thing for you.  No idea what inspired this, but they've released a new Netflix special called, "The Unauthorized Bash Brothers Experience." The premise is simple:  What would it look and sound like if the infamous "Bash Brothers," also known as Jose Canseco and Mark McGwire, released a rap album in 1988?  The answer is a messed up, pretentious, and tremendous 30 minutes that you'll love.

Andy Samberg is Canseco, and Akiva Schaffer is McGwire.  The two of them (always in their Oakland A's uniforms) take the viewer on a journey that is heavy on steroids, the pursuit of glory, the search for love, late 1980's icons, and more steroids.   You have to love a song that includes a lyric about a roomful of Kathy Ireland cutouts.  There are cameos from Sterling Brown and Maya Rudolph, and it looks like they both had a great time in their roles.

The graphics all have an authentic 80's feel.  A few of the clips look like they were filmed in a store you'd find on a beach boardwalk where you can film a karaoke video.  Samberg and Schaffer are all-in on this "album," with some of the songs sounding like Marky Mark and Vanilla Ice, with maybe a touch of Yanni thrown in for good measure.

The whole thing is gloriously silly, and then the 30 minutes are over before you have a chance to wonder if it's gone on too long.  You may still be confused about what the hell you just watched, but you will feel better for the experience. 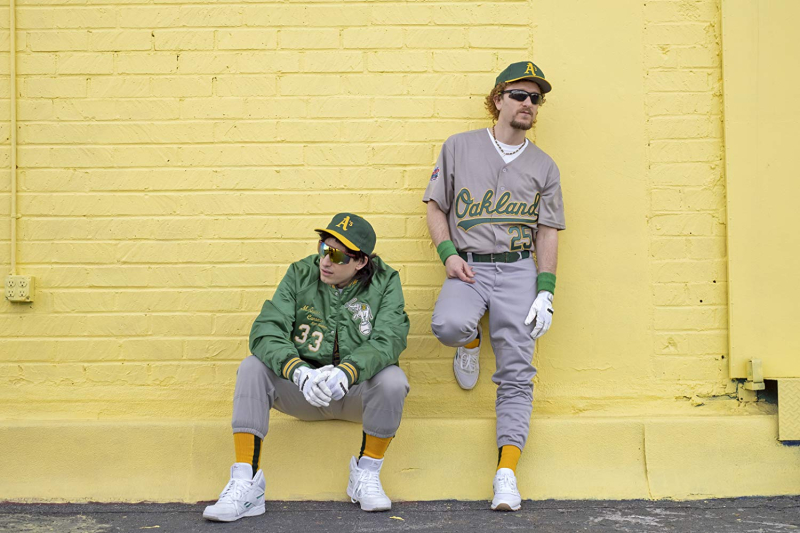 The rap album you didn't know you needed.  (pic via imdb.com)