Welcome back, and a happy Friday to you all!  The sun is shining for the moment, and the birds are chirping like crazy.  BDH and Little Buddha think they're talking about how happy they are not to have to deal with Memorial Day weekend traffic.  I read yesterday that driving could take as much as three times longer than usual this weekend.  That made me cry a little bit, but hopefully we can avoid that.  Oh, and for those of you who were asking, yesterday's doctor's appointment went fine, thank you.  Need to have a follow-up next week, but that shouldn't be a big deal.  Now, let's check out today's headlines.  The guys put a fresh pot of coffee on the counter, so grab yourself a nice medium DD, because it's time to clear out some Clutter.

Donald Trump spent yesterday yelling from the hilltops that he's "an extremely stable genius" after Speaker Nancy Pelosi expressed concern for his well-being and said family members and staff might need to stage an intervention for him.  Trump then forced staff members to vouch for his calmness.  After that, he called Pelosi "crazy" and tweeted out a doctored video of her stumbling over her words during a television appearance.  There really is no one who gets under Trump's skin like Pelosi.  Perhaps she's trying to goad him into resigning instead of making the House open an impeachment inquiry. 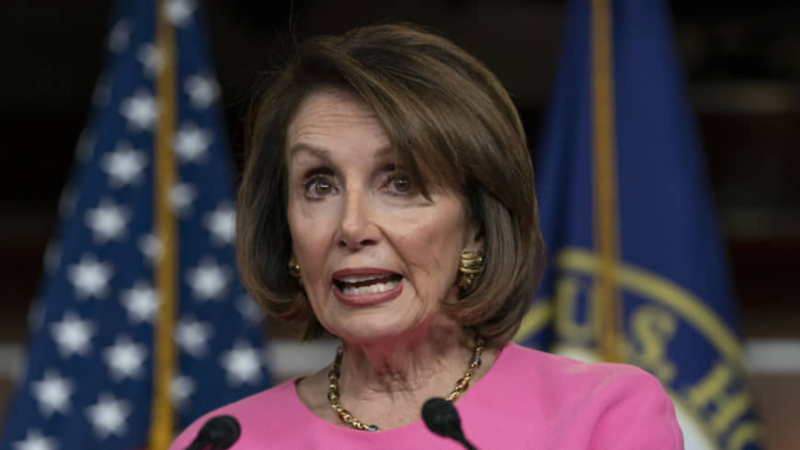 Speaker Pelosi keeps baiting Donald Trump, and he keeps falling for it.  (pic via japantimes.co.jp)

British Prime Minister Theresa May announced she's resigning, effective June 7. May's decision comes following her three failures to get Parliament to agree to her Brexit plan.  We're not sure that her replacement is going to have any more luck with this issue that has so bitterly divided the United Kingdom.  Perhaps, as some have suggested, a general election may be required so that voters can state again what they're looking for from their leaders.

WikiLeaks founder Julian Assange was indicted on 17 counts of violating the U.S. Espionage Act yesterday for his alleged role in releasing classified material passed along by Chelsea Manning.  One doesn't have to be a fan of Assange to realize that this is a direct assault on the First Amendment, and it could have a chilling effect on whistle-blowers moving forward.  The debate over whether or not Assange is a "journalist" is a red herring.  There's nothing in the First Amendment that says journalists get special protections.

The Weinstein Company is reportedly close to reaching a settlement agreement with the women who accused Harvey Weinstein of sexual misconduct. The bankrupt company is apparently about to run out of cash, so it's important this deal be reached before that happens.

This has been a rough week on Wall Street, but the S&P 500 is still up 12.58% for the year, and it's less than 5% off its 52-week high, so the Clutter investment team is still on auto-pilot for the time being.

The Boston Red Sox beat the Toronto Blue Jays 8-2 to win their series yesterday.  Boston spot starter Ryan Weber stepped up to the occasion, as he gave up just three hits and one run over six innings.    The Sox offense got contributions from a number of players, but we're most excited about the fact that Steve Pearce showed some signs of life.  The first baseman has been struggling all year, but he went 3 for 5 with 3 RBI and hit his first home run of the season, thus raising his batting average to .171.  Of course that's "not good," but it's about 60 points higher than it was a week ago.  Next up, the Red Sox start a weekend series against the Houston Astros, where they'll hope to do better than last weekend when Houston took two out of three games.  It's a rematch of starting pitchers as well, as Chris Sale once again faces off against Wade Miley.

Ndamukong Suh is reportedly planning to sign a one-year deal with the Tampa Bay Buccaneers for $9.25 million. We're good with any decision the defensive tackle makes that keeps him away from playing the New England Patriots.  He's one of the dirtiest players in the game, so let him remain the NFC's problem.

Hey MMA fans, do you want to own a piece of the UFC?  It looks like that's going to be an option, because their parent company is apparently going public.

The Rolling Stones and The Verve have called a truce after 20 years over the authorship of the song "Bitter Sweet Symphony." The 1997 song was the subject of a legal battle after The Verve was accused of using more of a Stones song than they had rights for, and the credit and royalties were assigned to Mick Jagger and Keith Richards.  However, Jagger and Richards have apparently had a change of heart and have turned all of that over to Verve frontman Richard Ashcroft.

We mentioned earlier this week that actress Natalie Portman disputed Moby's account that the two dated in the late 1990's, and said instead that she found him to be a somewhat creepy older man.   Moby decided that he couldn't let that go and responded by posting several pictures of the two of them together 20 years ago. First, pictures don't prove a relationship, and second, they're definitely not the answer to being called creepy.  Someone may need to pull Moby away from his computer for a while.

Chicago Med and Chicago P.D. fans are still processing how the shows' season finales handled the departures of major characters.  The most generous term we can come up with is "ambiguous," but one of the exits seemed so rushed, we're wondering if there's more to the decision than just a new creative direction.

Okay kids, that's going to do it for now.  Let's wrap up this week with The Verve and a live performance of, "Bitter Sweet Symphony," (with all legally awarded rights and credits) for today's, "Song of the Day."

You know what, we need a second video for that tune.  Here's "Bitter Sweet Symphony" in the closing sequence of Cruel Intentions, which was one of the great film moments of the 1990's.  Enjoy:

Thanks for stopping by, everyone.  It was great to see you, as always.  A quick programming note:  We've got a little running around to do this weekend, so it's possible that we won't be back until Tuesday.  We're going to play it by ear, but we just didn't want you to worry.  For now, enjoy the rest of your day, be good, and we will catch up with you again soon.  Until next time, that's today's Clearing out the Clutter, and we are outta here.