Anthony Bourdain was a hero to many people around the globe.  The renowned chef/author/TV journalist spent years highlighting the beauty of the world and our commonalities, through the vehicle of food, and there was no one else like him.  That's why it was so devastating when the news came out about his death by suicide in June 2018.  His fans felt like they'd lost an advocate, a travel guide, perhaps a motivational coach, and a friend who often appeared on TV from some fascinating location trying a food many of us had never heard of before.  His loss still stings a year later, but the folks at CNN have put together beautiful tribute to honor him called, Anthony Bourdain Remembered. (Release date: May 28, 2019)

The 208-page book is a collection of testimonials about Bourdain that CNN received from viewers, as well as well as colleagues, and guests (including former President Barack Obama, who spent time with Bourdain in Vietnam.)  There are a few common themes in the remembrances.  People with experience in the food industry talk about how he made them feel like they mattered.   Others write about how Bourdain encouraged them to step out of their comfort zones and see the world.

Bourdain saw value in people and cultures everywhere.  That's a message that can never be hammered home too often.  He's described as an excellent listener who helped people feel like they were being heard, whether they lived in Iran, Columbia, or New Jersey.   His guests trusted him to tell their stories, and it showed in his programs.  The essays are accompanied by gorgeous pictures of Bourdain in various locales, including New York, France, Cuba, Kenya, Bhutan, Nigeria, and more.  Whether he was eating all sorts of dishes, talking to new friends, or taking in the world around him, most importantly, Anthony Bourdain gave his viewers a new perspective.

Anthony Bourdain Remembered is a moving tribute.  The book once again reminds us how much we've lost from his passing.  However, it also serves as a reminder about the possibilities and adventures that can be found in a good meal, whether it's from some hole-in-the-wall or the fanciest of restaurants.  Wherever you are, people love their food, which means there's always a starting point for a conversation, regardless of your background. Anthony Bourdain's eagerness to reach out to, and connect with, others is an important legacy which needs to be kept alive to continuing inspiring us all. 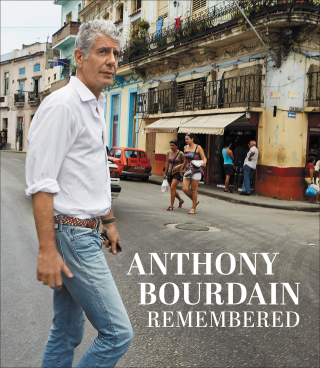 An emotional look back at a fascinating man.  (pic via amazon.com)