Welcome back!  Come on in, have a seat.  How are you?  It's a little drizzly outside at the moment, but that's okay.  I don't think the plants object to a little more rain.  Speaking of the plants, I had some solid garden time yesterday, and we're in pretty good shape at the moment.  The next big thing is getting the compost, and I'm going to need a few weeks of stretching before that happens.  Anyway, let's check out today's headlines.  BDH and Little Buddha just brought in a fresh pot of coffee, so grab yourself a nice medium DD, because it's time to clear out some Tuesday Clutter.

Donald Trump and his kids are suing Deutsche Bank and Capital One to keep them from obeying congressional subpoenas and turning over Trump-related financial records. Trump is also already suing House Oversight Committee Chairman Elijah Cummings to try to block his subpoena of records from Trump's accounting firm.  The Great Pumpkin doesn't isn't big on accountability, and he doesn't care that Congress has the responsibility to provide oversight of the executive branch.  Trump loves lawsuits, but the courts don't have the right to stop Congress from carrying out their fundamental duties. 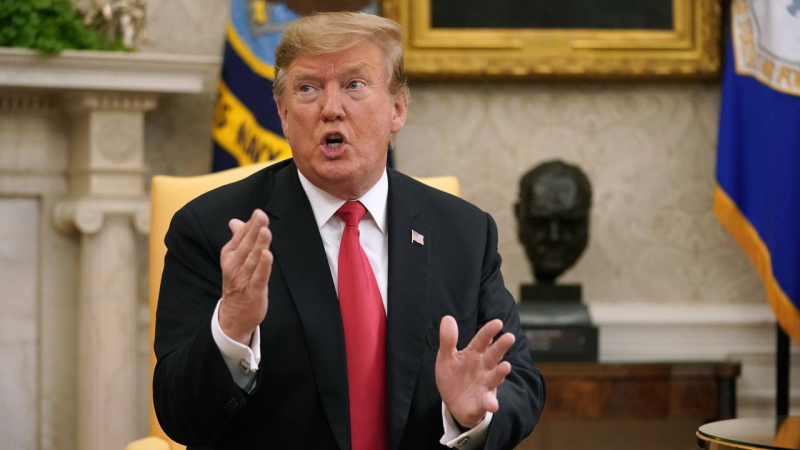 Trump thinks he's above the law.  (pic via clickorlando.com)

Trump is meeting with House Speaker Nancy Pelosi and Senate Minority Leader Chuck Schumer today to talk about infrastructure. We don't have high hopes for this conversation, but it remains baffling that this should be a contentious issue between the two parties.  Everyone in the country benefits from having good roads, bridges, and so on.  Even the economic elite who don't care about anyone else would have higher profits if our infrastructure was in better shape, but yet the subject still gets thrown around like a political football.  This should be a time for everyone to show they can govern, but the betting odds are higher that some Trump quote about "Chuck and Nancy" will be the only thing of note that comes out of the discussion.

Deputy Attorney General Rod Rosenstein submitted his letter of resignation yesterday. Rosenstein will leave his job on May 11, and the general consensus seems to be that no one will be sorry to see him leave.  Republicans are angry that he appointed Robert Mueller as special counsel to investigate the Trump - Russia connection.  Democrats object to his preemptive decision, made in conjunction with Attorney General William Barr, that no obstruction of justice charges would be filed against Donald Trump, despite all of the evidence in Mueller's report.  At the end of the day, Rosenstein did what he needed to do to keep his job, and that's it.

JPMorgan Chase tweeted tone-deaf financial advice yesterday, and it was not well-received.  Somehow people objected to being lectured about their spending habits by a financial firm that had to be bailed out by the federal government.  Who could have predicted that would happen?

Researchers say it's possible that there will be more dead than living users on Facebook in 50 years. That raises some serious issues about how all of that data should be handled, because it should not become the sole property of Mark Zuckerberg and company.  It also generates some frightening thoughts about how the social media giant could be even more embedded in society half a century from now.  Will newborns be given implants that allow them to log on before they've even said their first word?  Obviously that sounds like a fringe conspiracy theory that we may or may not have made up 30 seconds ago, but how much would you be willing to bet that it won't happen?

The Boston Red Sox beat the Oakland A's 9-4 yesterday. Eduardo Rodriguez gave up seven hits and four runs, to go with seven strikeouts, in 4 2/3 innings.  He gave up all of the runs in the second inning of the game and was fair besides that, but his pitch count was once again too high too early in the game.  The exciting part of the game was that the Sox offense woke up for a night.  Boston responded to their early 4-0 deficit by putting six runs on the board in the bottom of the third inning.  Overall, five batters drove in the nine runs.  Could this be the sign that the Red Sox bats are finally waking up as we prepare to head into May?  We'll find out tonight with Rick Porcello taking the mound for Boston.

The NFL Draft is over, but the New England Patriots are still making moves.  The Pats traded tight end Jacob Hollister to the Seattle Seahawks yesterday for a 7th round draft pick in 2020. That means New England's current top tight ends are (checks notes)  Austin Seferian-Jenkins and Stephen Anderson.  It should probably only take us another few months not have the urge to add Rob Gronkowski's name to that list.  Everyone in the NFL seems to be big on tight ends these days, so we can only assume that means Bill Belichick will turn this year's team into a run-only offense or something.

We're sorry to hear that John Singleton died yesterday after a recent stroke.  The director, who burst onto the scene in 1991 with Boyz n the Hood, was recognized and admired for championing authentic portrayals of  African-American experiences in Hollywood.  Singleton was only 51 years old.  Our condolences go out to his family, friends, and fans.

Warning: There's a huge Avengers: Endgame spoiler involved, but we agree with this theory about one character's fate.

In case you missed it,  last night's episode of Jeopardy! had an entertaining ending.

The new issue of Rolling Stone has an interesting story about Willie Nelson's long-standing relationship with marijuana.

Okay kids, that's going to do it for now.  We need something to boost the energy around here since it's so grey outside.  We need something that will inspire a little head-bobbing, foot-tapping, and send you all off with smiles on your faces.  We need Erasure to close things out with, "A Little Respect," for today's, "Song of the Day."

Thanks for stopping by, everyone.  It was great to see you, as always.  Enjoy the rest of your day, stay dry, and we'll catch up with you again for more news and coffee soon.  Until next time, that's today's Clearing out the Clutter, and we are outta here.