Welcome back!  Come on in, have a seat.  The day is off to a rainy start, but that's okay.  It's good for the plants, and I think it's supposed to end later this morning anyway.  Speaking of the plants, I got a couple of hours in the garden yesterday, which was terrific. In addition to the plants beginning to return, this is also the greenest the yard has looked in a while, so that's a bonus.  Anyway, let's check out today's headlines.  BDH and Little Buddha made some coffee, so grab yourself a nice medium DD, because it's time to clear out some Tuesday Clutter.

Senator Elizabeth Warren (D-MA) unveiled her proposal yesterday to reduce/eliminate student loan debt for 95% of the country, as well as make public colleges tuition-free.  Under Senator Warren's plan, households making under $100,000 would have $50,000 of debt eliminated, with the relief gradually decreasing until the household income reaches $250,000.  Her campaign says that the plan would cost $1.25 trillion over 10 years.  Opponents are already yelling that it will cost too much, and some are also making the idiotic argument that "college just isn't an option for everyone."

However, rampant debt is a major drag on this country's economy, and the stimulus that this move would provide would be overwhelming.  Largely funded by Warren's plan to tax the uber-wealthy, this proposal would be a significant boost to the middle class who are getting crushed these days.   Candidates love to talk in generalities about how they'd help the middle class, but Senator Warren is explaining with proposal after proposal how she'd actually do it.  Style is flashy, but she's providing substance to the 2020 presidential race. 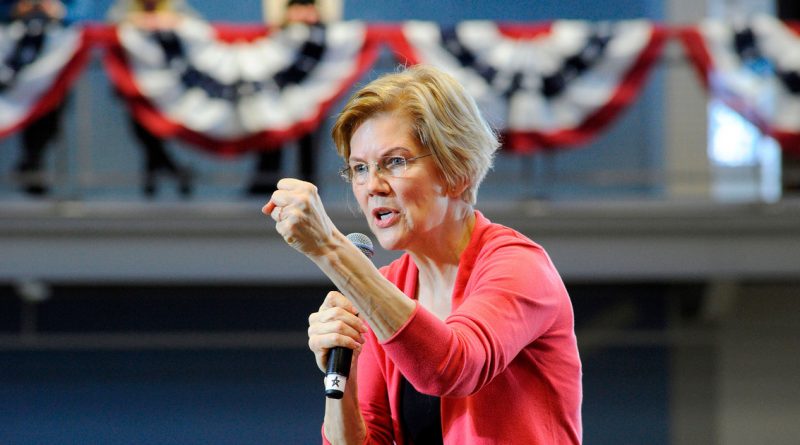 Senator Warren is laying out her plans for the country.  (pic via usdailynews.site)

Speaker Nancy Pelosi says the House should focus on its investigations of Donald Trump instead of impeachment. However, said investigations are more than likely just going to reconfirm the need for impeachment hearings, so this argument is really just an attempt to run out the clock over the next 18 months.   If Democrats end up shrugging at Trump's documented obstruction of justice because they're afraid of the voters, they'll have no one to blame but themselves if those voters throw them back into the minority next year.  Also, they will confirm to Trump that there are no consequences to his actions, and an emboldened Trump should scare the hell out of everyone.

Speaking of the Great Pumpkin, Donald Trump is suing House Oversight Committee Chairman Elijah Cummings to block a subpoena for Trump's tax returns. What do you think is Trump's bigger concern - the returns show that he's bought and paid for, that they will prove multiple cases of tax fraud, or that they confirm his net worth is considerably smaller than he claims?

As expected, Boston Red Sox pitcher Nathan Eovaldi is having surgery today to remove the "loose body" in his right elbow. If he follows the same path he took after having a similar procedure last year, this should mean that Eovaldi is out for at least the next two months.  Sox manager Alex Cora says Hector Velazquez will take Eovaldi's spot in the rotation for now (starting with tonight's game against the Detroit Tigers.)  Velazquez has been one of Boston's best starters so far, so that might actually be okay for a while.  However, the team doesn't have much depth after that, besides Brian Johnson, so everyone else better stay healthy for a while.  We were on-board with the Red Sox giving Eovaldi a new four-year deal in the offseason, but hopefully he won't be averaging one elbow surgery a year under that contract.

New Sacramento Kings head coach Luke Walton is being sued for sexual assault by a Los Angeles sports reporter. We'll see if Walton's job with the Kings ends up being short-lived.

Some lucky folks had the chance to check out Avengers: Endgame last night, and the first (spoiler-free) reviews are overwhelmingly positive.

Hugh Laurie has a sci-fi comedy coming to HBO, and we are already prepared for Avenue 5 to become one of our new favorite shows.  The former Gregory House as the captain of a spaceship?  Sure, sign us up!

We're also glad to hear that NCIS: Los Angeles and NCIS: New Orleans will both be back next year.  The NCIS shows tend to be our fallback programs when nothing else is on, so keep them coming.

Prince's memoir will be released on October 29. Maybe BDH and Little Buddha will review that one.

Okay kids, that's going to do it for now.  BDH and Little Buddha found an interesting video to close things out today.  Our guess is that you'll be as surprised as we are a) that it exists, and b) that it's pretty catchy.  It turns out that former teen idol Tiffany re-recorded her 1987 hit, "I Think We're Alone Now," and that's right, it's today's, "Song of the Day."

We'll check to see if Debbie Gibson has redone "Only In My Dreams."