Welcome back.  Come on in, have a seat.  How are you?  Feeling a little anxious at the moment, which is not how I'd like to start a new week, but here we are.  I should be able to get in at least a little garden time, and that always helps.  Also, BDH and Little Buddha said they'll do whatever it takes to improve my mood, so I'm pretty sure I'll be more settled soon.  In any case, let's check out today's headlines.  The guys say the coffee is ready, so grab yourself a nice medium DD, because it's time to clear out some Monday Clutter.

Donald Trump's lackeys are trying to discredit former White House counsel Don McGhan's testimony that Trump pressured him to have Robert Mueller fired and then to deny that Trump ever ordered him to do so (which you might also know as "Trump obstructed justice.")  The attacks start with Rudy Giuliani and Kellyanne Conway trying to undermine McGhan's statements.  If that doesn't work, we assume the next step is for Trump to tweet that McGhan was an incompetent attorney/secret Democrat trying to undermine his greatness, and after that comes the usual, "I don't even know who that guy is."

When he's not going after McGhan, Rudy Giuliani wants you to know "there's nothing wrong" with getting campaign help from Russia. Election interference from a foreign country?  Whatevs, right, Rudy?  Democrats can't wait for Republicans to see the light anymore.  This entire party is as corrupt to the core as their orange leader. 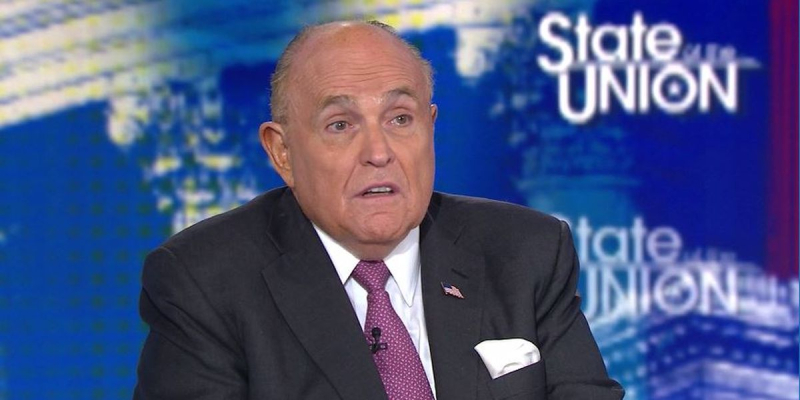 Still happy to shill for Trump. (pic via wxfg.com)

Massachusetts Representative Seth Moulton announced he's joining the 2020 presidential race. That's good, because for a while, we were concerned that the Democratic field wasn't going to be big enough.  The 40-year-old  Massachusetts congressman has repeatedly called throughout his career for a "new generation of leadership" in Washington, from his defeat of an incumbent in 2014, to his failed attempt to remove Nancy Pelosi as the leader of the House Democrats, so expect to see that as a recurring theme of his campaign.

It's great to hear that a tentative agreement has been reached between Stop & Shop and its striking workers. It sounds like the workers were able to protect their health insurance and pension plans.  The grocery chain was forced to come to this agreement because the union's strike was so effective.  There were were reports that customer volume dropped 75% during the 10-day strike, which demonstrates the power and importance of supporting labor.  Companies who are making billions in profits should be taking care of the hard-working people who make that success possible every day.

Yesterday was a terrific day in Boston sports.  First, the Red Sox beat the Tampa Bay Rays 4-3 in 11 innings for their first sweep of the season.  David Price had a good outing, giving up just five hits and two earned runs while notching 10 strikeouts.  The only problem was his pitch count got too high, and he had to leave after five innings.  Matt Barnes gave up a home run to Tommy Pham to allow the Rays to tie the game, but the Sox hung in there, and Rafael Devers, Jackie Bradley Jr., Michael Chavis, and Christian Vazquez combined to get the final run across in the 11th.  The Red Sox are now 9-13 on the year, but more importantly, they're 6-4 in their last 10 games and are showing signs of life.  This is a perfect time to start a 10-game homestand.  Chris Sale will take the mound for Boston tonight as they face the Detroit Tigers.

Next up, the Boston Celtics beat the Indiana Pacers 110-106 to sweep that series in four games. The Celtics are the first team to make it to the second round of this year's playoffs.

Finally, the Boston Bruins hung on to beat the Toronto Maple Leafs 4-2 to tie their playoff series at three games apiece.  The decisive Game 7 will be played in Boston on Tuesday.

Yup, a terrific day.  We'd be fine with many more of those, please.

Actress Lauren Cohan says she'd like to make one more appearance on Supernatural before the show ends next year.  We'd be good with that.  Cohan played a woman named Bela Talbot, and she met an unfortunate end, but death isn't necessarily a permanent thing on that show.  Supernatural has a long list of alumni we wouldn't mind showing up one last time.  The show has always been good about making use of its history, so maybe we'll get to see a few of these folks in season 15.

Okay kids, that's going to do it for now.  Here's Green Day to close things out with, "Holiday," for today's, "Song of the Day."

Thanks for stopping by, everyone.  Hanging out with you is always a terrific way to start a new week.  Enjoy the rest of your day, be good, and we'll catch up with you again for more coffee soon.  Until then, that's today's Clearing out the Clutter, and we are outta here.