Welcome back.  It's a gloomy Friday around here at the moment.  It's grey and raining outside, and I'm down because I lost a plant last night.  This little cactus had been with me since college, so that's 25+ years and 10+ homes.  He (it was totally a he) was a terrific housemate, and I feel like I let him down by not realizing much earlier that he was in trouble.  I take immense pride in how how much care I put into the 400 plants here, but I dropped the ball in this case.  BDH and Little Buddha are doing their best to cheer me up, but I feel as blah as the weather.  However, we all agreed that we should still check out today's headlines.  The guys made coffee, so grab yourself a nice medium DD, and let's clear out some Clutter.

Joe Biden's handling of the Clarence Thomas - Anita Hill controversy in 1991 is a major liability to his latest presidential campaign.  Biden did a terrible job as Senate Judiciary chairman of addressing Hill's claims that Thomas sexually harassed her.  He knows this is going to be an issue, so Biden recently called Hill 28 years later after Thomas' Supreme Court confirmation hearing.  However, Hill wouldn't describe the conversation as an apology, and again, he didn't call her until he was getting ready to launch another campaign.  Add this to the recent stories abut Biden making women uncomfortable, and his attempt to laugh that off, and it will be interesting to see what his poll numbers are with women voters.

Great to hear that a federal judge temporarily blocked the Trump administration's attack on the Title X family planning program. The proposed regulations would have prevented "any organization that offers or refers patients for abortion from receiving Title X funds to cover services like contraception and STD screenings for low-income patients."  It was a direct assault on women's health that would have deprived thousands of women across the country from being able to access fundamental health care.  Anti-choice groups vow to continue targeting this program, because apart from tax cuts, there's nothing else that gets conservative hearts pumping like punishing women. 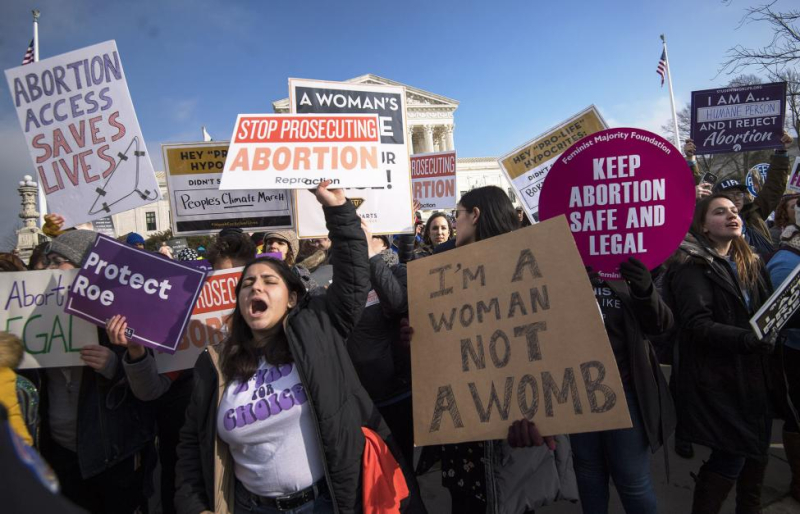 The fight continues.  (pic via upi.com)

Amazon Prime members are getting an option for one-day shipping, as the retail giant tries to keep people from dropping their subscriptions.  The service is already available in certain markets, and the company is upgrading its infrastructure to make it nationally available over the course of the year.  Don't think that's going to have much of an impact on our buying habits, but we'll see.   Will it influence your choices?

Warren Buffett says investors would be just as well off buying a S&P 500 index fund as purchasing shares of his Berkshire Hathaway company. Buffett has long championed index funds, and the Clutter investment team would argue a fund that tracks the S&P 500 is the best choice for the vast majority of "regular people" who put their money in the stock market.  It provides a broad exposure to the market, has low expenses, and history repeatedly demonstrates their success over the long-term.

The Boston Red Sox beat the Detroit Tigers 7-3 last night to split their four game series.  Rick Porcello finally earned his first win of the year, as he gave up three runs over six innings.  The Sox offense continues to show signs of warming up, as the lineup had 10 hits, and five different guys drove in the seven runs.  The 11-15 Red Sox continue their quest to get to .500 when they take on the Tampa Bay Rays for a weekend series.  Boston would certainly love to duplicate last weekend's sweep of the first place Rays.  Tonight's pitcher has yet to be announced.

The Boston Bruins barely had a chance to catch their breath after beating the Toronto Maple Leafs in the first round of the NHL playoffs, but the B's continue their march towards the Stanley Cup with a 3-2 win against the Columbus Blue Jackets.

It was a sad day for Boston Celtics fans, with the news that the legendary John Havlicek died yesterday. Havlicek was the Celtics all-time leading scorer, he was named one of the 50 greatest NBA players in history, and he was always described as a class act.  Of course, Havlicek was featured in one of the all-time great sports calls when he stole the ball to seal the win in Game 7 of the 1965 Eastern Conference Finals against the Philadelphia 76ers.   Our condolences go out to his family and friends.  John Havlicek was 79 years old.

The first day of the NFL Draft is in the books. No shock that Kyler Murray and Joey Bosa went first and second.  Much more surprising is that the New England Patriots picked wide receiver N'Keal Harry from Arizona State.  There's no doubt the Pats need help at that position, but they've never picked a WR in the first round during the Bill Belichick era, and their history of drafting these players is mixed at best.  They were apparently forced into it after missing out on most of the free agents who were available this off-season.

We're going to try to keep this mostly spoiler-free, but last night's Supernatural season finale was tremendous.  There were high stakes, some humor, the return of an important fan favorite,  and the last 10 minutes?  Outstanding.  The writers did a terrific job of setting the stage for the show's last season, and we're confident they're going to give the Winchester boys a fitting send-off next year.

Okay kids, that's going to do it for now.  We said we were going to be spoiler-free about the Supernatural season finale, but the closing sequence really was outstanding.  It was partly because the visuals were perfectly paired with the music, so here's Motorhead playing, "God Was Never On Your Side," as the Winchester boys and Castiel face the the end of the world, for today's, "Song of the Day."

What a devastating title for a tune.

Thanks for stopping by, everyone.  It's always nice to catch up with you for a bit.  Enjoy the rest of your day, be good, and we'll do this again soon.  Until next time, that's today's Clearing out the Clutter, and we are outta here.