Welcome back!  Come on in, have a seat.  How are you?  I crashed last night and woke up wide awake at 4:00 this morning, although BDH and Little Buddha convinced me to stay in bed until 5:00.  Not sure what that was all about.  Maybe my internal clock is still adjusting to Daylight Saving Time.  We spent that hour listening to the wind howl a bit, but at least it wasn't that arctic breeze we had a few weeks ago.  The high temperatures will be in the mid 30's today, and then it's time to bring on the 40's and maybe even a few days in the 50's.  Gardening season is coming, folks!  The guys think I sound like I need some coffee.  Fortunately, they just made a fresh pot, so help yourself to a nice medium DD, and let's clear out some Tuesday Clutter.

House Speaker Nancy Pelosi (D-California) says Donald Trump "isn't worth" impeaching. She says the man is unfit for office on every level, but,

"(I)mpeachment is so divisive to the country that unless there’s something so compelling and overwhelming and bipartisan, I don’t think we should go down that path because it divides the country."

That's not going to sit well with a good portion of the country who has this crazy notion that if someone is acting as a foreign agent, perhaps they shouldn't be occupying the White House.  If failing to uphold the Constitution doesn't warrant removal from office for Speaker Pelosi, what would Trump have to do for her to be on board?  This is not business as usual, this country is in a crisis, and the American people need protection from a man whose interests directly conflict with ours. 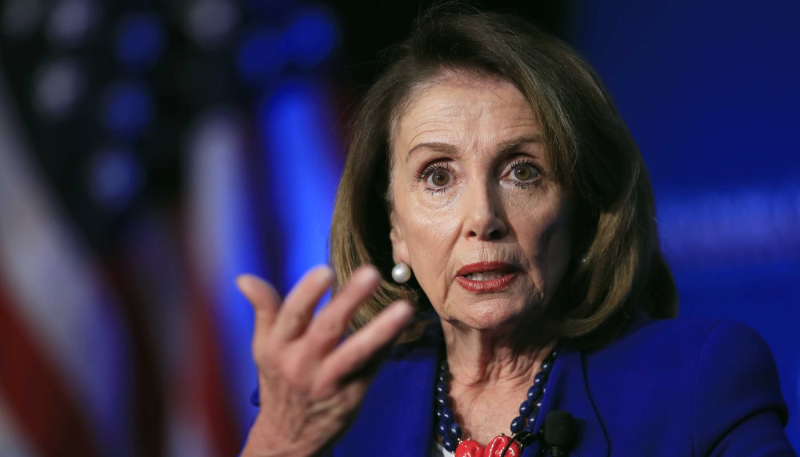 On the other hand, Pelosi's statement doesn't completely close the door.  Given the number of investigations into Trump's shady business practices, it's reasonable to believe that "something so compelling and overwhelming" that even she and her leadership team can't ignore could be revealed.  As far as bipartisanship goes, the GOP is all-in on supporting a traitor.  There's no reason Democrats need to follow them off the cliff.  Speaker Pelosi may not be interested in going down this path, but that doesn't mean her members will blindly follow her, as Republicans do for the Great Pumpkin.

Speaking of Trump investigations, the New York Attorney General's office is now looking into Trump's relationship with Deutsche Bank, one of the few financial institutions to continue lending Trump money long after other banks bailed on him for being such a poor risk.

After facing severe backlash, Facebook was forced to restore several of Senator Elizabeth Warren's ads promoting her plan to break up big tech companies, like Facebook for instance.  Given its enormous clout as an information source for so many Americans, Facebook's attempt to censor a political debate is particularly dangerous and is one of the reasons why the company needs to have their influence reduced.

Here's hoping the files in the Jeffrey Epstein sex trafficking case are unsealed after a federal appeals court started down that path yesterday.  The case has long been a source of controversy, ranging from allegations of high-profile members of this alleged ring, to the prosecutors being accused of misconduct.  The public has a right to know exactly what happened here and who was involved.

Stephen Colbert has plenty to say about the recently released offensive comments Tucker Carlson made about women, minorities, the LGTBQ community, and more.

Shame on the MBTA for approving a 6% fare hike that will decrease use of public transportation. This system is continually neglected and underfunded by our public officials.  Forcing the riders to absorb this hit, even with the approved amendments to limit the damage, is unfair, shortsighted, and misguided.

The New England Patriots lost a couple of notable free agents yesterday.  Defensive end Trey Flowers is expected to sign with the Detroit Lions, and left tackle Trent Brown is moving to the Oakland Raiders. Flowers reportedly got a 5-year deal for roughly $16-17 million annually, and Brown set a record for tackles with a four-year deal for a total of $66 million.  We're more disappointed about the loss of Flowers, but the question now becomes, who is going to protect Tom Brady's blind side next year?  Isaiah Wynn missed his rookie year with a torn Achilles.  Hopefully he'll be ready to go for the start of this season, but should the Patriots be looking at someone with more experience to fill that spot?

Linebacker Terrell Suggs is leaving the Baltimore Ravens for the Arizona Cardinals.  Suggs always felt like a dangerous opponent for the Patriots, so we're happy to wish him the best of luck in his new home in the NFC.

Nick Foles finally has a team to call his own:  Foles signed a 4-year/$88 million deal with the Jacksonville Jaguars. Good for him for getting an opportunity to show what he can do when he knows the starting quarterback job is his to keep.   We also wish him good luck, except for when Jacksonville plays the Patriots.

The UFC's Conor McGregor was arrested in Miami Beach yesterday for grabbing and destroying the phone of someone who was trying to take his picture. McGregor was later released on $12,500 bail.

We're sorry to hear that Olympian cyclist Kelly Catlin died last Thursday as a result of an apparent suicide. The same holds true for Freeda Foreman, the daughter of legendary boxer George Foreman, who was found dead on Sunday.   That kind of loss is a soul-crushing pain that we wouldn't wish on anyone, and our thoughts go out to their family and friends.  Catlin was 23 years old, and Foreman was 42.  As always, we urge anyone who might be struggling to talk to someone, whether it's a relative, friend, or professional.  You can always reach the National Suicide Prevention Lifeline at 1-800-273-8255.  No matter how much you may be convinced otherwise, you are not alone.

Captain Marvel dominated the box office with a $455 million global opening weekend.  You can check out our review here, but long story short, the movie earned every last dollar. This is proof that a female superhero can be just as big of a hit at the movies as the guys, and we're already looking forward to the sequel.  Plus, Captain Marvel returns next month when Avengers: Endgame opens on April 26.

At first glance, hearing that Charlize Theron and Seth Rogen were teaming up for a movie didn't rise high on the radar.  However, Long Shot looks like it might actually be funny.  Check out the trailer:

Mark your calendars, Big Bang Theory fans:  The show's series finale is on May 16. Of course, this group seems destined to live on in syndication heaven for decades to come. There seems to be about an hour a week when either this or Friends isn't airing somewhere on basic cable.

Okay kids, that's going to do it for now.  We're in a mood for some Halestorm at the moment, so here they are to close things out with, "I Miss the Misery," for today's, "Song of the Day."

Thanks for stopping by, everyone.  It was great to see you, as always.  Enjoy the rest of your day, be good, and we'll meet back here again soon.  Until next time, that's today's Clearing out the Clutter, and we are outta here.