Welcome back!  Come on in, have a seat.  How are you?  We were just talking about whether or not the first quarter of the year went by quickly.  Maybe a bit.  Things are about to pick up though, because we're beginning to get our first arrivals in the garden!   Everyone got off to a slow start last year, and they seem determined for that not to happen again this time.  As long as early April's weather is good to them, we're thrilled to see some small patches of green popping up around here.  Today's rain should help them.  We're also happy to hear more chirping birds.   Spring is here, friends.  On top of everything else, BDH and Little Buddha say the coffee is ready, so help yourself to a nice medium DD, and let's clear out some Sunday Clutter.

SNL weighed in on the "interpretation" of the Mueller Report:

Former Vice President Joe Biden was recently accused of an unwelcome kiss to the back of a Nevada politician's head at a 2014 campaign event.  Biden's spokesman says he doesn't remember the incident with Lucy Flores, but she has, "every right to share her own recollection and reflections."  This isn't the only time Biden has been accused of "touchy" behavior, and he and his camp need to think long and hard about how that fits into today's #MeToo political environment before Biden goes forward with a presumed presidential bid. 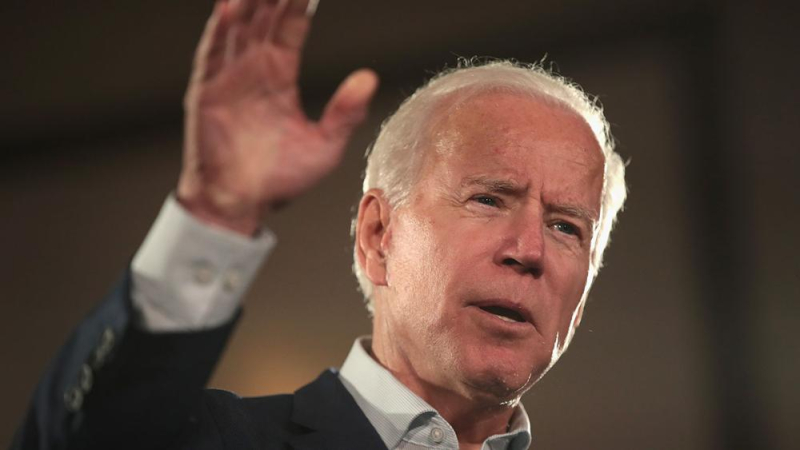 Has the window closed for Joe Biden?  (pic via wsbradio.com)

Conspiracy theorist Alex Jones is trying to claim "psychosis" is to blame for his pushing the notion that the Sandy Hook shootings were staged, as he tries to wiggle his way out of a lawsuit brought against him by the parents of the victims of that horrific event.  Here's hoping the plaintiffs take that piece of garbage for every last penny he has.

A Catholic mother wrote a letter that's gone viral, urging female students to stop wearing leggings. The problem, as the letter writer sees it, is that when women wear leggings, it "forces" men to look at them, and then you know the guys aren't responsible for what happens after those sinful thoughts arise.  Women, and some men, around the country responded to the letter by of course, wearing leggings.  Here's a radical idea:  How about we stop shaming women for what they're wearing?

BDH and Little Buddha say welcome to Liberty the Lab, who has just become the first comfort dog for the Concord Police Department in New Hampshire. Her job will be to support crime victims, and she looks incredibly sweet.

The Boston Red Sox lost 6-5 to the Seattle Mariners yesterday, as their starting pitchers continue to struggle out of the gate.  Eduardo Rodriguez gave up five earned runs and needed 105 pitches to get through just 4 1/3 innings.  Obviously it's early, but we're starting to wonder if, "waiting for E-Rod to be efficient" is going to become the new version of, "waiting for Clay Buchholz to be healthy."  At least the bullpen was able to contain the damage again.  We'll see if Rick Porcello can right the ship when he makes his 2019 debut this afternoon.

The Los Angeles Lakers were eliminated from the playoffs a while ago, so LeBron James is calling it quits on the rest of the season. James will miss the final six games of the year, leaving him with a career-low 55 games played this season because of a variety of injuries.  Now he can focus on his other job as de facto general manager and figure out how to get his friends to come join him next season.

Cheers again to all of the bands who were inducted into the Rock and Roll Hall of Fame on Friday.  The Class of 2019 is an impressive group that includes Stevie Nicks, Janet Jackson, The Cure, Radiohead, Def Leppard, Roxy Music, and the Zombies.

Bassist Michael Anthony says the rumored Van Halen reunion tour isn't going to happen, so he's off to tour with Sammy Hagar and The Circle.

We want to wish a happy birthday to Batman.  The Dark Knight turned 80 years old this week.  Have to say, he looks great for his age.  Here's hoping the next 80 years go as well for him.

Congratulations as well to Law & Order: Special Victims Unit on being renewed for a 21st season.  That will make it the longest-running prime time live-action series in TV history, eclipsing the original Law & Order mothership and Gunsmoke.

Okay kids, that's going to do it for now.  Let's have two-time Hall of Famer Stevie Nicks close things out with, "Stand Back," for today's, "Song of the Day."

Thanks for stopping by, everyone.  It was great to see you, as always.  Enjoy the rest of your day, stay dry, and we'll meet back here again for more fun soon.  Until next time, that's today's Clearing out the Clutter, and we are outta here.