Motley Crue burst on to the music scene in the early 1980's and made an immediate impact with their loud, rude, and catchy music.  Of course, the skintight pants, huge hair, and makeup also grabbed the public's attention.  These guys were all about partying, performing, and shocking as many people as possible, which made them a perfect fit for the decade.  Some people at the time might have been surprised to hear that the group lasted roughly 35 years, because it seemed like at least one or two of them might die long before then.  (Technically, one did die, but he came back.  More on that later.)

The band started with nothing.  They achieved incredible success, came crashing down, and they regrouped for a final run before calling it quits in 2015.  For those who want to re-live the golden age of hair metal, there's the new Crue biopic, The Dirt, out now on Netflix.  Based on the best-selling book of the same name written by the Crue and Neil Strauss in 2002, this movie is every bit as over the top and raunchy as fans would expect.

The band is portrayed by a group of actors who may not be well-known to many.  There's rapper Machine Gun Kelly as drummer Tommy Lee, Douglas Booth as bassist Nikki Sixx, Daniel Webber as singer Vince Neil (although Webber looks much more like pro wrestler/singer Chris Jericho) and Iwan Rehon as guitarist Mick Mars.  Each band member gets time to give their perspective on the story.  Viewers learn the most about Sixx and Lee, less about Neil, and Mars remains as mysterious as ever.  As far as the supporting cast goes, Pete Davidson is miscast as Tom Zutaut, the record company agent who signed Motley Crue.  Davidson seems terrified of the scene around him, and it's hard to imagine him surviving long in this hedonistic world.  David Costabile plays manager Doc McGhee, and he also seems a touch too calm for this story, given McGhee's own colorful history.

The Dirt sets the tone early, as there's sex, drugs, and rock crammed into the first two minutes of the film.   We get a sense of the band members right from the start.  Nikki Sixx had an unhappy childhood and was the founder/visionary behind the group.  Tommy Lee comes across as a large happy puppy, although we do eventually see his violent streak.  Vince Neil is the pretty boy primarily focused on getting laid, and Mick Mars is straight out of The Addams Family.  The guitarist has been battling a spinal disease for decades, and you can tell he has less patience than the other guys, because he's working on borrowed time.  After that, it's a fun look back at the Sunset Strip of the 1980's, as the Crue played the Whisky a Go Go, the Troubadour, the Starwood Lounge, and the Rainbow Bar and Grille, all famous locations where  where many acts got their first break.  As time went on, the venues got larger, and the band got more out of control.

Their drug use and alcohol abuse is shown in detail, and there are stories like the time they snorted ants with Ozzy Osbourne.  (Did we mention the 80's were crazy?)  There's a part about Vince Neil killing Hanoi Rocks drummer Razzle in a drunk driving incident.  It's a scandal that the singer only received a 30 day sentence, of which he served a mere 19 days.  We also see Nikki Sixx die from a heroin overdose, come back, and immediately shoot up again.  The band's parting of the ways with Neil in 1992 is briefly covered.  He was replaced by singer John Corabi for one album, before everyone decided they made a mistake and reunited.  (Full disclosure:  We always dug "Hooligan's Holiday.")

The Dirt sort of feels like an extended episode of Behind the Scenes, but Motley Crue fans will enjoy it.  To be clear, it's not a documentary, but it seems like the powers that be put a lot of effort into staying true to the band's story, and  they captured a time that many fans remember fondly.  Plus, you can't go wrong with the soundtrack.  (Bonus:  You also can also check out some new music from the band.)  If you start singing along every time you hear songs like, "Looks that Kill, "Girls, Girls, Girls," "Home Sweet Home," or "Kickstart My Heart," you'll enjoy this ride. 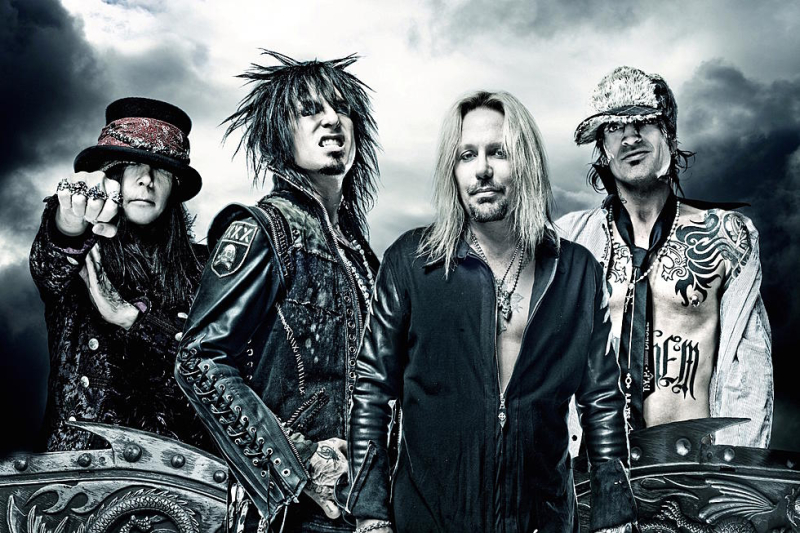 The Crue is back to tell their story.  (pic via loudwire.com)