Captain Marvel is the story of a Kree warrior who is part of a war against the Skrulls, a race who can impersonate, down to the DNA level, anyone they see.  She is also a woman who can't remember her past, except for various images that come to her in her sleep.  The fight against the Skrulls eventually brings her to Earth, circa 1995, where she meets one Nick Fury.  From there, while trying to accomplish her mission, she also seeks to figure out who she really is.  This is the Marvel Universe's first movie with a woman in a solo lead role.  It's long-overdue, and it's also a bullseye.  To the anger of trolls everywhere, Brie Larson is a perfect superhero for these times. 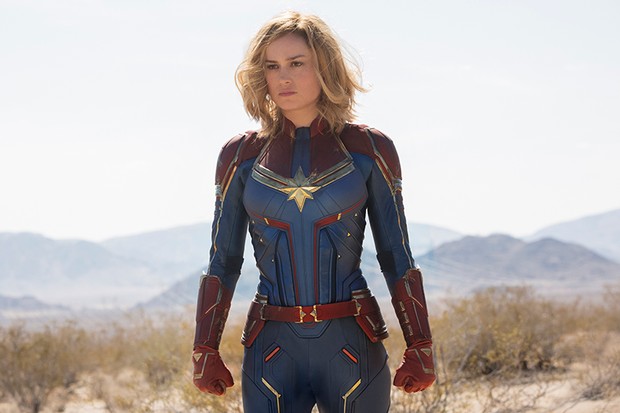 Larson plays Carol Danvers (also known as Vers), a former Air Force pilot who already has her superpowers at the start of the movie, which is a nice twist.  She fights under the guidance of her Kree mentor Yon-Rogg, (played by Jude Law, who always seems smarmy) against a group led by Talos (played by Ben Mendelsohn), and then she ends up on Earth, which is when things get interesting. That's where Danvers starts to piece together who she was, how she ended up in this position, and what that means for her future.  Just when she thinks she has it, things change again.  Watching Larson work all of that out is the best part of Captain Marvel.

The actress does a terrific job in the role.  Danvers may have to work backwards to figure out who she is, but it's clear from the beginning that she's a determined woman.  She exudes confidence and is clearly having a great time during the movie's funny moments, but she also shows doubt as circumstances warrant.  Danvers has been dealing with men trying to hold her back all of her life, and when she finally breaks free from those restraints, she's unstoppable.

Samuel Jackson plays Fury, of course.  He's been digitally edited to look younger, since this movie is set almost 25 years in the past.  It sounds creepy, but it generally works, and Jackson seems to be having a blast this go-around.  Not sure that the editing works as well for Clark Gregg in the role of Agent Coulson, but it's not a distraction.

Danvers is reunited with her best friend and former co-pilot Maria Rambeau, (played by Lashana Lynch) and Rambeau's daughter Monica (played by Akira Akbar.)  It's this connection which restores Danvers' sense of identity and her humanity.  This movie, like most comic book films, is loud, but there's a quiet scene between Danvers and Rambeau which packs as much of a punch as any of the action sequences.  That moment makes it clear this character's future is in good hands.

We can't forget Annette Bening as the form of the Supreme Consciousness (as well as an earlier Danvers mentor.)  Bening also seems to be having fun as she taps a bit into her Jeff Goldblum side for the role.

Wait, we also have to give a shout-out to Goose the Cat, but we can't say anything about him until you've seen the movie.  Trust us.

In addition to being a story of self-discovery and feminism, the movie is also a love letter to the 1990's.  We've got Blockbuster Video stores, payphones, and dial-up modems, among other things.  Danvers spends a good chunk of the story in a retro Nine Inch Nails shirt, and the soundtrack is tremendous, with songs from Lita Ford, R.E.M., Salt-N-Pepa, Garbage, Nirvana, Heart, TLC, and more.  The film itself has a slightly washed-out look which makes it seem even more like it was shot in 1995.  If you were a fan of that decade, this is the movie for you.

If all of that wasn't enough, Captain Marvel also lays down the groundwork for the Avengers concept.  Of course, you need to stick around after it's all over for the mid-credits Endgame tease.

As Marvel moves towards the updated edition of its universe, Brie Larson has secured her spot in the next generation.  Fans will see Captain Marvel again when Endgame comes out on April 26, but there's no doubt she still has many of her own tales to tell.