Welcome back, and a happy Monday to you all!  We hope you had a great weekend.  I forgot that changing the clocks means it's dark again when we get up in the morning, at least for now.  That's okay, not having to turn on the lights until 7:30 in the evening is a fair trade-off.  I underestimated the amount of snow we were getting yesterday, so there was some shoveling involved.  However, the highs are supposed to be in the 40's today, so let the melting begin.

I told BDH and Little Buddha that I had some weird dreams last night.  Actually, they weren't weird, they were mean.  Don't know what that was all about.  The guys said not to worry about it, and to focus on fun things instead like checking out the headlines and enjoying some coffee.  Speaking of which, they just made a fresh pot, so help yourself to a nice medium DD, because it's time to clear out some Clutter.

Donald Trump is looking for $8.6 billion for his mythical border wall as part of his 2020 budget. (Funny, we thought Mexico was supposed to pay for this.)  The proposal, which would be funded with a 5% cut in domestic programs, will be dead on arrival, thanks to Democrats controlling the House.   The question becomes whether we'll have to go through another government shutdown over this asinine idea.  As we said the last time around, all Trump cares about is distracting his base from his legal and political problems, and he's got no problem damaging lives if that's what it takes for him to stay out of jail.

Trump lied to Republican donors about flubbing Apple CEO Tim Cook's name, even though the mistake is on tape, because the guy is a pathological liar who can't help himself.  He's spent his life living in an alternate reality based on a foundation of, "never admit a mistake about anything under any circumstances," which is pretty easy to do when you have no shame.

The Cindy Yang story is just getting started.  The woman who founded the spa where New England Patriots owner Robert Kraft is accused of prostitution solicitation, and who has been selling access to Donald Trump, has now been revealed to be, "an officer of two groups with ties to China’s Communist government."  While Mother Jones says there's no direct evidence linking Yang to Chinese intelligence services yet, who here would bet against the connection being established at some point? 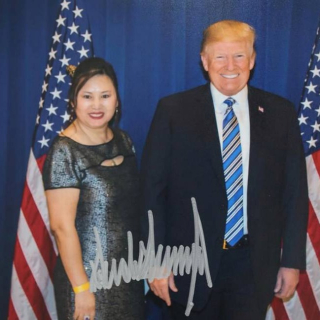 The red flags in this story are growing like weeds.  (pic via nymag.com)

In case anyone is wondering, Tucker Carlson is an awful human being.  The liberal site MediaMatters.org unearthed a number of misogynistic comments Carlson has made on the radio over the years, and he isn't backing down from them.  It's no accident that his show on Fox News has been bleeding advertisers.  The remaining companies still doing business with this buffoon should join the others and find the exit door.

Senator Bernie Sanders (I-Vermont) made his first trip to New Hampshire for the 2020 campaign on Sunday.  Sanders was met with enthusiasm by his supporters as he seeks to prove that his win in the 2016 NH primary wasn't a fluke.  The liberal giant rightfully takes credit for steering the Democratic Primary field to the left, but it's a different dynamic this time around.  He's facing a crowded field, as opposed to simply being the alternative to Hillary Clinton.  Senator Sanders may need a win in the Granite State more than any of the other Democratic candidates.

Boston Globe columnist Renee Graham argues that Boston should also honor civil rights leader Malcolm X with a monument, much like the city plans to do for Martin Luther King and Coretta Scott King.  Malcolm moved to Boston when he was 15 years old, and the city had a major impact on him.  As Graham points out, he's recognized in other ways in Boston, but he deserves the full embrace of a monument.

Early Facebook investor Roger McNamee isn't impressed with the company's new pledge to be more focused on privacy. McNamee, who is currently promoting his new book criticizing Facebook, says it's a "public relations move" that distracts from what he sees as the core issue.  That being that Facebook's business model depends on tracking their users even when they're on other sites.

John Oliver went after AT&T and the FCC in an anti-robocall rant that makes us love him even more:

Motley Crue is releasing another new song on Friday in support of their upcoming biopic The Dirt, which comes out on March 22.  It looks like the band is already revising history by saying their 2015 "retirement" tour just meant they weren't going to tour anymore.  We remember it being sold as these guys weren't going to work together again under the Motley Crue name.   We're not complaining, just noticing that many hard rock/heavy metal "retirement" announcements don't carry much weight.

Okay kids, that's going to do it for now.  Let's close things out with some 1980's goodness.  This clip is here almost for the fashion as much as the catchy tune.  Here's Night Ranger with, "Don't Tell Me You Love Me," for today's, "Song of the Day."

When you hear the guitar solo, it's easy to picture Brad Gillis during his stint with Ozzy Osbourne.