Welcome back, and a happy 2019 to you all!  It's great to see you all here in one piece.  Cheers for responsible celebrations.   Did you have a good New Year's?  I had one final belated Christmas gathering with some relatives during the day, which was nice.  I got a present which you should be hearing about later this year.  After that, BDH, Little Buddha, and I spent the night bouncing between Doctor Who and Twilight Zone episodes.  I was ready to throw in the towel at 11:00, but the guys really wanted to stay up until midnight.  (Easy for them to say, since they got their naps.)

We hung in there for the final hour, celebrated at 12:00, and we were asleep at 12:01.  I woke up completely stuffy again this morning, so the guys said they'd make the coffee extra strong to make sure we could all hang out today.  (Have I mentioned how much they love seeing you?)  After that, it's back to watching our shows until tonight's Doctor Who New Year's special.  The crew just put the coffee pot on the counter, so help yourself to a nice medium DD, and let's start off the new year with some Tuesday Clutter!

House Democrats are ready to pass a batch of Senate-approved bills to reopen the government when they take over the House on Thursday.  These proposals don't include any new money for a wall, but they would place the blame for a continuing shutdown directly on Donald Trump.

Our calendar says 2019, but the 2020 presidential election cycle has officially begun with Senator Elizabeth Warren's announcement yesterday that she's formed an exploratory committee. The Massachusetts senator brings a strong progressive message to what will be a crowded field, and we look forward to seeing how that plays out in the months ahead.  We also expect other prominent Democratic candidates to make similar announcements soon, lest they give Senator Warren too much of a head start.  A lot of people want to make declarations about who will win the Democratic nomination, but that's a waste of time since we're still almost two years away from the election.  Let's see everyone in action first.  Of course, at some point, we'll also need to start taking bets on who will be the Republican nominee. 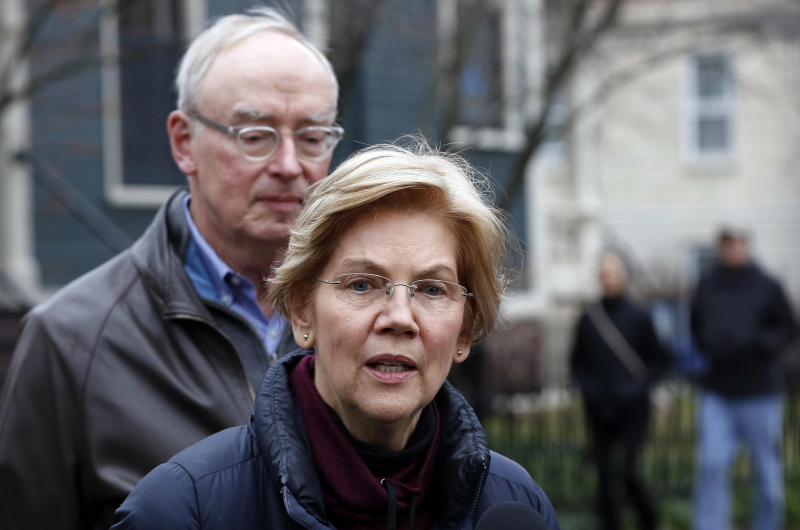 So it begins.  (pic via spokesman.com)

Outgoing White House chief of staff John Kelly is taking shots at Donald Trump as he leaves the White House.  We've got no disagreement with any of Kelly's comments about Trump's fitness for office, but Kelly didn't bathe himself in glory while he was in this role, so we'd be fine with not having to watch his attempted rehabilitation tour.

Judging by the leaked tape of a recent performance, Louis C.K. has turned into a bitter old man in the aftermath of his admitted inappropriate behavior with a number of women over the years.  We lean towards giving comedians more leeway than just about anyone else when it comes to language and topics.  They can push conversations that people may be afraid to have otherwise, and that's important ability.  However, the key thing is that comedy should punch up, not down, and there's nothing gained by making fun of the Parkland school shooting survivors.

Doing so is being shocking just for the point of being shocking, which is an empty gesture.  There's also this nagging suspicion that when C.K. says, "(W)hy does that mean I have to listen to you? Why does that make you interesting?" as he discounts the students' trauma, he's really talking about the women who revealed his behavior.  It's a lame routine for a lame audience, and C.K.'s time is still up.

Pittsburgh Steelers wide receiver Antonio Brown reportedly didn't play in a must-win game on Sunday because he got into a fight with quarterback Ben Roethlisberger on Wednesday and quit on the team for the rest of the week.  That's one smooth operation coach Mike Tomlin's got going there.

Marvin Lewis was finally fired after 16 years as the head coach of the Cincinnati Bengals yesterday.  We never thought we'd see that day come.  Lewis was 131-122-3 during the regular season over those 16 years, but an 0-7 record in the playoffs was bound to bite him eventually.   Lewis endorsed Hue Jackson as his replacement, but if the Bengals ownership looks at Jackson's time with the Cleveland Browns and still thinks he's the right guy for their vacancy, they deserve what's likely coming to them.  Of course, there were those who said the same thing about another former Browns coach years ago...something Belichick...whatever happened to that guy anyway?

Thanks for stopping by, everyone.  It was a treat to see you, as always.  BDH and Little Buddha want you to know that you're welcome to stay longer if you want to watch our shows with us.  Otherwise, enjoy the rest of your day, be good, and we'll see you back here again for more fun and partying like it's 1999 soon.  Until next time, that's today's Clearing out the Clutter, and we are outta here.