Home Archives Profile Subscribe
Merry Christmas From Doctor Who
Mo Vaughn, Me, and the Foxy Lady

Welcome back!  Come on in, have a seat.  How are you?  A quick programming note:  We may not be able to meet up tomorrow, but don't worry, we'll definitely be back on Friday.  BDH and Little Buddha didn't want you to panic if we aren't here on Thursday.  We just have to take care of something that's thrown off the schedule a bit.  However, you're here now, we're here now, and thanks to the guys, the coffee is here now.  Grab yourself a nice medium DD, and let's clear out some Clutter.

Michael Flynn ended up not being sentenced yesterday. Flynn agreed to delay the sentencing when it became clear that the judge seemed ready to throw the book at him, so now he's got a few more months to cooperate with Robert Mueller's investigation.  Judge Emmet Sullivan came just short of calling Flynn guilty of treason, and it will be interesting to see how Flynn responds over the coming months with that hanging over his head. 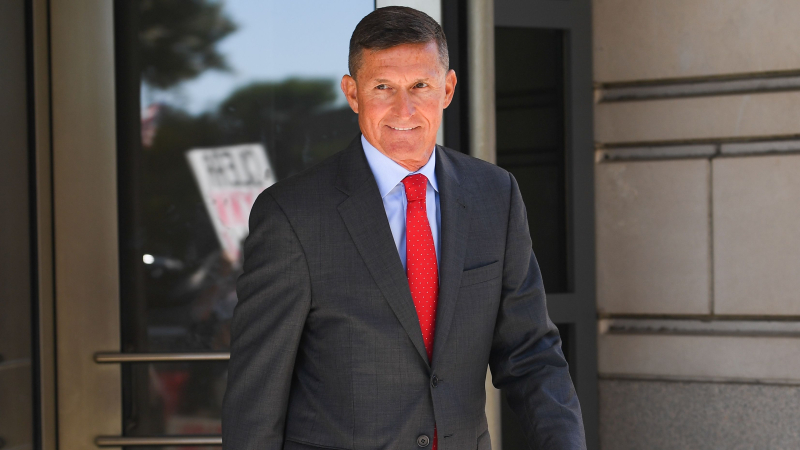 What else does Michael Flynn have to say?  (pic via usatoday.com)

Meanwhile, the Trump Foundation is being shut down under court supervision, as Donald Trump is accused of gross misuse of the charity's funds for his own personal needs.  Even with this dissolution, the New York Attorney General's lawsuit against the Foundation will continue, with the goal of preventing Donald Trump or his kids from serving on the board of another NY charity, as well as securing millions in restitution.

On a related note:  Our understanding has always been that the Trump Foundation was largely funded by WWE boss Vince McMahon and his wife Linda, who is now the head of the Small Business Administration for Trump.  We're curious to see if this lawsuit ends up having any impact on the WWE as it moves forward.

House Democrats have made it clear they want Donald Trump's tax returns. This might be the best week for the Great Pumpkin to release them in a Friday afternoon news dump, but with brilliant legal minds like Rudy Giuliani advising him, that seems unlikely to happen.

The U.S. Senate passed a comprehensive criminal law reform bill yesterday. Our first question is always if there's something that allows Donald Trump to escape prosecution, but other than that, this sounds like an actual step forward in making the federal judicial process fairer.  The House is expected to approve the same bill and send it to Trump for his signature.

We've got no problem with the Trump administration banning bump stocks. There's no reason anyone outside of the military needs a firing rate faster than a rifle.  Gun groups have already said they'll challenge the ban in court.  You know if this ban came from a Democratic White House, there would be good odds we'd be talking about a mass shooting somewhere in the country by the end of the day.

A group of federal judges dismissed 83 ethics complaints against Brett Kavanaugh because none of them want to investigate a Supreme Court Justice.  Meanwhile, the country is left with a Justice who was appointed by a man who conspired with a foreign power to win the White House, thus tarnishing the Court for as long as Kavanaugh remains on the bench.

Soon-to-be former Representative Mike Capuano (D-MA) blames his loss on young voters, "who don't have a clue."  It's a bad look.

Congratulations to Nevada, who will become the first state in the country with an overall female-majority Legislature in 2019. May this become the start of a long-growing and widespread trend.

The Federal Reserve is expected to raise interest rates again today, but people will be watching for any suggestion of fewer hikes than previously expected for 2019.  The monthly interest on the Clutter savings account is now enough to buy a cup of coffee, which is all we were hoping for when these increases began.

It's hard to believe, but it sounds like Facebook has given away even more user data than previously believed.  According to the New York Times, the company gave Apple, Amazon, and Bing access to contact information, as well as calendars and friends.  That's all terrible, but we find even more egregious is that they gave Spotify, Netflix, and the Royal Bank of Canada access to private messages.  Make no mistake about it, Facebook is the enemy of your privacy, so keep that in mind every time you interact with the site.

We have serious concerns about the state of the New England Patriots this year, but the good thing is that the NFL is wide open, with even the New Orleans Saints struggling, so everything is still on the table.

We're sorry to hear that Penny Marshall died on Tuesday from diabetes complications. We watched her for years on Laverne & Shirley.  She moved on from the show to direct a number of our favorite movies like Big, Awakenings, and of course, A League of Their Own, which remains an all-time classic.  Our condolences go out to her family, friends, and many fans.  Marshall was 75 years old.

The Dark Knight is on his way to the American League:  Matt Harvey signed a one-year deal with the Los Angeles Angels for $11 million.  Injuries derailed a once-promising career, and we suspect Harvey will have a hard time adjusting to the tougher line-ups, but these days, $11 million isn't that large of a risk for a pitcher.

Okay kids, that's going to do it for now.  Let's have the Kinks close things out with, "Father Christmas," for today's, "Song of the Day."

Thanks for stopping by, everyone.  It was great to see you, as always.  Enjoy the rest of your day, be good (so you don't end up on any naughty lists at the last minute), and we'll see you back here again for more fun soon.  Until next time, that's today's Clearing out the Clutter, and we are outta here.