Welcome back!  How are you?  We've been listening to this wind for almost 12 hours now, and BDH and Little Buddha keep asking if we're going to end up in Oz.  They're always up for an adventure.  It is supposed to quiet down by this afternoon, so as long as it doesn't knock down a power line or anything, we should be fine.  In the meantime, let's see what's going on in the world today.  The guys made coffee, so help yourself to a nice medium DD, because it's time to clear out some Tuesday Clutter.

The Senate Intelligence Committee released two reports which further explain the level of Russia's interference in the 2016 presidential election.  An independent firm examined "10 million tweets, 116,000 Instagram posts, and 61,500 Facebook posts" from the Russia-backed Internet Research Agency (IRA) that were designed to cause divisiveness in the American electorate.  Those are some staggering numbers, which are likely not the full scope, and it's unsettling to think about how easy it is to dupe the population.  We've been attacked, friends.  There may not have been any guns or missiles involved, but we were attacked with propaganda by a foreign power who had the express goal of putting Donald Trump in the White House, and tere's no reason to believe the IRA has stopped.

Michael "Lock Her Up" Flynn will be sentenced for lying to the FBI today, although he's not expected to serve any jail time after (finally) cooperating with Robert Mueller's investigators.  He must have given up some high-level information if he in fact does avoid incarceration, so Donald Trump's next Twitter-tantrum should be a doozy.

A new poll shows that Americans don't want another government shutdown.   Donald Trump already said on camera that he's the one who should get the blame if this happens.  The question is if he cares at all about this, and whether he has any reservations about having to explain why the Secret Service wouldn't get paid to protect him.  Of course, all of this is just another attempt to distract from his ever-growing legal problems, and there's a good chance he'll cave, because he's got no leverage, as soon as he finds the next shiny object to tweet about. 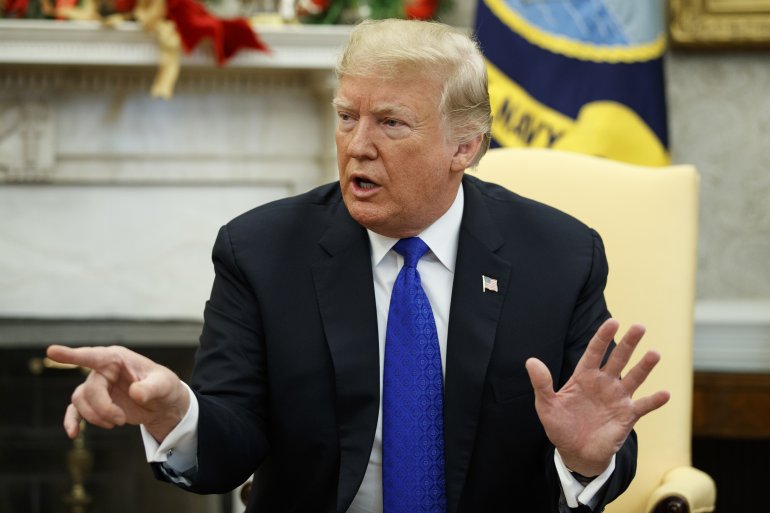 Will Trump fold on his biggest issue?  (pic via wgnradio.com)

The recent Texas court ruling overturning the Affordable Care Act is based on faulty logic and strong political ideology, and it shouldn't hold up, but if it does, that could have huge impact in Massachusetts.

CBS announced that former CEO Les Moonves will not get his $120 million severance package after lying to investigators in the wake of multiple accusations of sexual misconduct.

A woman named Babi Christina Engelhardt recently discussed her eight-year affair with Woody Allen which began when she was 16 years old. It's a sad story, as what she describes sounds like a classic case of an older man grooming and manipulating a child.  At what point will we say enough is enough with Allen and stop providing him with a platform and adulation?

Monday was another rough day on Wall Street. The S&P 500 dropped 2.08%, leaving the index down 4.78% for the year.  It is still up 14 points over its 52-week low, but if it breaks that floor, the Clutter investment team may need to start paying more attention for any bargains.  In any case, it's remarkable that even with the last tax-cut gift to the wealthy and corporations, Donald Trump's unhinged economic policies and erratic behavior are still powerful enough to damage stocks to this extent.  His boss must be very proud.

Congratulations to Kelly Krauskopf on becoming the first assistant GM in the NBA.  Krauskopf will reportedly take that position with the Indiana Pacers.

We were interested in seeing Vice, the new movie about Dick Cheney, but this review has us rethinking that position.  Anything that makes Cheney seem sympathetic is a hard pass.

Okay kids, that's going to do it for now.  It's time for Alice Cooper to close things out with his take on the Christmas classic, "Santa Claus is Coming to Town," for today's, "Song of the Day."

Thanks for stopping by, everyone.  Hanging out with all of you is always one of the highlights of our schedule.  Enjoy the rest of your day, be good, and we'll catch up with you again for more fun soon.  Until next time, that's today's Clearing out the Clutter, and we are outta here.

Posted by Colin Moore at 08:22 AM in Business, Current Affairs, Film | Permalink | Comments (0)