Welcome back!  Come on in, have a seat.  How are you?  We were just discussing the crazy full moon early this morning.  There was no need for an alarm clock with that shining outside our window!  Are you all set for Christmas?  I just need to wrap the catnip for Dad Clutter's cats.  I like to put them in with the rest of the presents.  The cats will walk into the room at some point, thinking everything is fine, and then one of them will realize that two of the presents are not like the others, and then the fun begins.  Other than that, it's business as usual around here.  BDH and Little Buddha say the coffee is ready, so help yourself to a nice medium DD, and let's clear out some Sunday Clutter.

Brett McGurk, the Trump point person on the Global Coalition to Defeat ISIS, resigned on Friday after Trump's abrupt decision to withdraw troops from Syria.  Trump then tweeted that he didn't know who McGurk was, which is either a lie too stupid for even a five-year-old to attempt, or it's a frightening look at the Great Pumpkin's ignorance.

Trump supporters have donated $13 million to a GoFundMe page to support his border wall.  Setting the money on fire wouldn't have been a dumber move.

The partial government shutdown will continue until at least Thursday, because even though the GOP currently holds the Senate, House, and White House, they're just that bad at the fundamental responsibilities of governing.

Donald Trump reportedly wants to know if he can fire Federal Reserve Chairman Jay Powell. Our understanding is that the law doesn't allow him to do that, but even discussing the idea is the kind of erratic behavior that is likely to send Wall Street on another tumble.  Every bull market comes to an end at some point.  It would just be nice to have it not mean that we're going to have another meltdown, and Trump doesn't have the temperament to handle that challenge.  As always, the Clutter investment team only speaks for themselves, but they're prepared to start bargain-hunting in 2019, because Donald Trump is likely to scare the hell out of investors.

Doctors removed two cancerous growths from Supreme Court Justice Ruth Bader Ginsburg's left lung on Friday. The growths were detected as part of an examination because of her broken ribs from a November fall, so cheers that they were detected so early.  Even this latest health scare wasn't enough to stop Justice Ginsburg from voting against Donald Trump's immigration policy regarding asylum seekers.  Meanwhile, much of the country stands by on alert prepared to donate a lung, or any other body parts Justice Ginsburg needs. 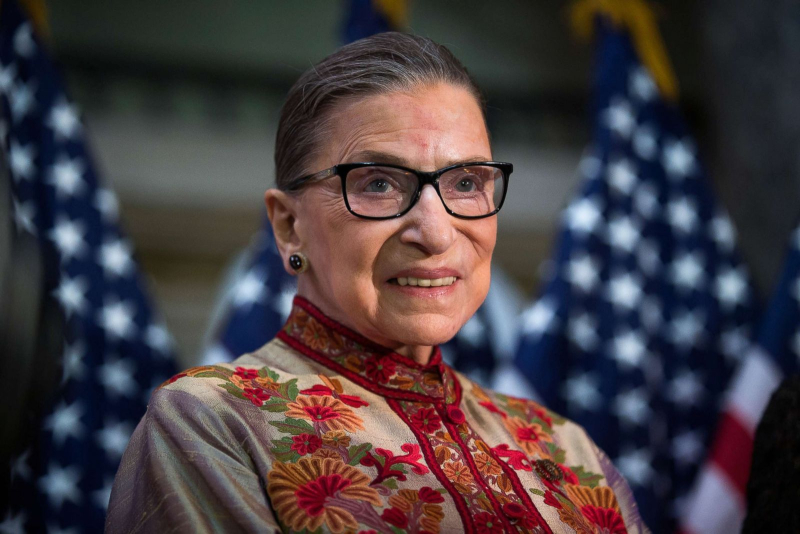 There's no stopping the Notorious RBG.  (pic via abcnews.go.com)

The New England Patriots face the Buffalo Bills at home this afternoon. New England will try to break a two-game losing streak and finally clinch the AFC East.  This week's sudden departure of Josh Gordon was a setback, but the Pats are still better than the Bills.  We don't see them losing three in a row, including a home loss in December, so it says here New England wins their 10th straight division title.  However, the way this season has gone, we're not taking anything for granted.

The Baltimore Ravens shocked the Los Angeles Chargers 22-10 yesterday. As we've said before, we have many concerns about the New England Patriots.  The good news in everyone in the NFL has problems, so make it to the playoffs, and let's see what happens.

The Boston Red Sox signed reliever Heath Hembree to a one-year deal for $1.3 million. Hembree appeared in 67 games for the Sox and had a 4.20 ERA in 2018, so we've got no issues with this deal, while we wait to find out who will be the team's closer next year.

Best wishes for a speedy recovery to New York Yankees pitcher CC Sabathia, who had heart surgery on December 11 to treat a blockage.  We hope the big lefty is ready to go by the start of the 2019 season, and then we hope Boston Red Sox batters drive him nuts by constantly bunting on him.

Sounds like Rihanna has a new album coming out in 2019.  Works for us.

Color us not surprised that Ozzy Osbourne is already explaining that his "No More Tours" tour is not in fact, a retirement tour. Ozzy was the first musician to teach us not to listen to retirement proclamations when he first said he was calling it quits back in the early 1990's.

There's apparently a Beverly Hills, 90210 reboot in the works, and much of the original cast is expected to participate.  We can see that doing well.

Okay kids, that's going to do it for now.  It's time for "Metal God" Rob Halford to close things out with, "What Child Is This," for today's, "Song of the Day."

Thanks for stopping by, everyone.  It was great to see you, as always.  Enjoy the rest of your day, good luck to anyone who has last-minute shopping to do, and we'll see you back here again for more coffee soon.  Until next time, that's today's Clearing out the Clutter, and we are outta here.