Welcome back!  How are you?  We're all doing fine at the moment, just have a few things to take care of before today's Patriots - Steelers game.  It looks like we might encounter some snow after that.  Not a big fan, but we'll deal with that later.  In the meantime, BDH and Little Buddha made some coffee, so help yourself to a nice medium DD, and let's clear out some Sunday Clutter.

A federal judge in Texas ruled on Friday that the Affordable Care Act (ACA) is unconstitutional. It makes for attention-grabbing headlines, but the law will remain in place at the moment, and there are a number of roadblocks to the ruling becoming law.  There are the appeals courts, where many are saying this ruling is expected to be overturned.  There is also the matter of the Supreme Court.

There are certainly votes for overturning the ACA, but the Court has already upheld the law.  Chief Justice John Roberts is mindful of the fact that the legitimacy of "his" court is under attack these days.  It seems unlikely he would want to add fuel to that fire by overturning the ACA now when he already recently passed on that chance.  There's also the fact the the GOP just lost the House largely because of their attacks on the ACA, so how much energy do they want to put into advocating for this ruling?   The suspicion here is that the Court won't take the case, but we are living in bizarre times, and nothing can be taken for granted.

Also, a side note for our Massachusetts readers:  The national open enrollment deadline for getting health insurance via the ACA was yesterday, but you have until January 23rd to get coverage through the Health Connector.

Donald Trump picked Mick Mulvaney to be his acting chief of staff.  This is the same Mulvaney who said in 2016 that he didn't like Trump, and that Trump "is not a very good person," but apparently no one else would take the job.  Mulvaney will remain the chief of Office of Management and Budget (OMB) while he's in this role, so clearly, neither job will get the attention it deserves.  Others have also pointed out that by not having Mulvaney quit his Senate-confirmed OMB job, that means Trump's new chief of staff is vulnerable to being called to testify before Congress.  That's a glaring vulnerability for the Great Pumpkin, but that's what happens when you're desperate to look like anyone wants to be seen near you. 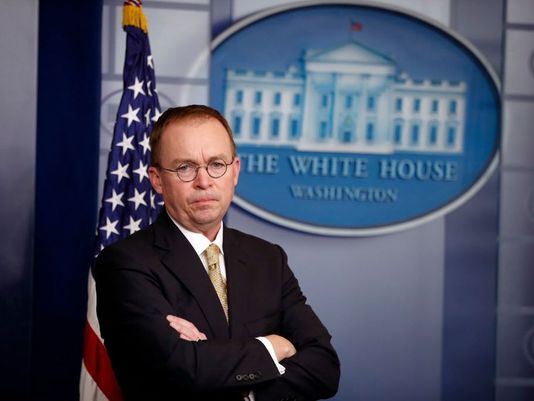 Interior Secretary Ryan Zinke is leaving the Trump administration at the end of the year.   Zinke has been the subject of multiple ethics violations and was likely looking at a battle with the Democratic-controlled House Natural Resources Committee next year.  Zinke attacked incoming-chairman Rep. Raul Grijalva (D-Arizona) on Twitter last month after Grijalva called for Zinke to resign, so odds are those conversations were unlikely to go well for Zinke/Trump, and the last thing Trump needs is another investigation.  No word yet on whether Trump will ask Mick Mulvaney to also take Zinke's place.

We send our best wishes to comedian Pete Davidson who alarmed many by posting what appeared to be a suicidal note on Instagram yesterday.  Davidson later deleted his account and was accounted for at the Saturday Night Live studios.  He also briefly appeared in last night's episode.  Davidson has been open about his mental health issues, and we hope his support system is able to help him.

Speaking of SNL, there's a lot to review from last night, but we have to give the spotlight to Matt Damon's sweet opening monologue.  First off, a top of the cap to the Massachusetts native for cheering the Boston Red Sox in front of a New York crowd.  Second, the story about the challenge of staying up late enough to watch the show as a little kid hit close to home.  Check it out:

Gotta love this story about a mom embarrassing the hell out of her young son with an enthusiastic karaoke performance of Kelly Clarkson's, "Since U Been Gone."  Mandy Remmell says she was trying to teach her son not to worry too much about what other people think.

Facebook revealed that a security flaw exposed the pictures of 6.8 million users for 12 days in September.  In addition to all of their many other problems, one wonders if these guys are just sloppy when it comes to running that site.

A new report by Reuters says that Johnson & Johnson knew for at least 40 years that their baby powder contained asbestos. Think about what kind of sociopath you have to be to bury that information, much like the dangers tobacco companies hid with their own products for decades.  As we've said many times here, the biggest criminals in this country wear the best suits.

Do you know which day of the week you're most likely to have a heart attack?  Not to freak anyone out, but it's coming up soon.

The New England Patriots take on the Pittsburgh Steelers later this afternoon.  The Patriots have owned Pittsburgh (a 12-3 record in their last 15 games), but they need to show they can bounce back from last week's crushing defeat against the Miami Dolphins.  Meanwhile, the Steelers are desperate to break their three-game losing streak, so this could be a real battle.  Both teams have a lot on the line, and our confidence in New England isn't peaking at the moment, but we'll always take the pairing of Tom Brady and Bill Belichick over Ben Roethlisberger and Mike Tomlin, so we're going with the Patriots winning and us downing the Tums.

Sorry to hear about the death of former offensive lineman Bill Fralic on Thursday.  He had a tremendous career with the Atlanta Falcons, although we remember him best for being a Wrestlemania II participant.  Fralic was 56 years old.  Our condolences go out to his family, friends, and fans.

Okay kid, that's going to do it for now.  A lot of people have mentioned this tune over the last few days, and now that we've finally had the chance to hear it, there's no doubt we need to share it with all of you.  It sounds like it's about two lines away from being a Saturday Night Live parody, but here's Pitbull's take on the Toto classic, "Africa."  Yes, we give you, "Ocean to Ocean," from the Aquaman soundtrack, for today's, "Song of the Day."

Thanks for stopping by, everyone.  It was great to see you, as always.  Enjoy the rest of your day, be good, and we'll see you back here again for more fun soon.  Until next time, that's today's Clearing out the Clutter, and we are outta here.