(Review) Eck: A Story of Saving

Dennis Eckersley is a man who was meant for the spotlight.  He's a combination of immense talent and a sense of flair that has served him well in his career, both as a Hall of Fame pitcher and now a TV baseball analyst.  His life has been a journey that's had some dramatic highs and lows, both on and off the field, and he's adapted to the changes and come out on the other side somehow even cooler than before.  You can see for yourself in the new MLB Network documentary titled Eck: A Story of Saving.

The 62-minute documentary covers all of the major stories of Eckersley's life, with plenty of commentary from the man himself, which is always a good thing.  There's the brashness of the 22 year-old Eck calling out California Angels hitter Gil Flores right before he struck Flores out for a no-hitter.  There are stories from former teammates like Bruce Hurst and Fred Lynn, who clearly didn't know what to make of the right-hander's flamboyant personality, but they loved what he could do on the mound and admired his honesty off it.

There's discussion of what could have been the beginning of the end of Eckersley's career when he was traded from the Boston Red Sox to the Chicago Cubs in 1984.  The man was losing his "cheese" as he would say, but he was traded to the Oakland A's in 1987, and what was supposed to be a temporary move to the bullpen turned into one of the most amazing second acts in baseball history.  Eck was baseball's first modern one-inning specialist, and he was dominant.  He could end the game on 10 pitches and look like a rock star in the process.  The guy who looked like he might be on his way to retirement at one point went on to become one of the greatest relievers of all-time, and he would pick up a Cy Young and MVP Award along the way in 1992.  Throw in a World Series championship in 1989, as well as that Hall of Fame induction in 2004, and the man's had many highlights in his life.

Of course, he's also faced some major falls as well, which are also discussed in the documentary.  There's the time his wife left him for his best friend and Cleveland Indians teammate Rick Manning.  Eck pulls no punches talking about this, and he seems at peace with it, as he was focused on making sure he did what was best for his young daughter Mandee (who is also interviewed in the documentary.)   (Side note:  Eck casually dropped a reference to this story in the middle of a Red Sox game this year, and it was jaw-dropping television.)

There's also discussion of his drinking issues and work to get sober in the 1980's, and once again, the man is honest about the trouble he got into and his drive to fix it.  He looks particularly vulnerable when talking about this time in his life, and you have to admire him about discussing it so openly.  It's easy to understand why Bruce Hurst referred to him as "my most honest teammate ever."

You can't have an Eckersley documentary without discussing the infamous Kirk Gibson home run in the 1988 World Series.  Some Red Sox fans (cough) may have been pulling for Gibson at the time, given that the Oakland A's swept the Sox in the playoffs that year.  However, your heart has to go out to the man when you see the footage of him walking shell-shocked off the field.  30 years later, Eckersley is still known for this pitch.  He's had the highs, but he's definitely had the lows to balance them out.

The documentary concludes with a look at his broadcasting career, and how he's known for both his unique language, ("cheese," "moss," "pair of shoes," etc.) and for the same honesty that he had throughout his playing career.  That honesty got him the wrath of David Price on a team flight in 2017, and Eckersley looks wounded talking about that incident.  Price may deservedly be the 2018 Boston Red Sox World Series hero, but he'll always be in the wrong here, and he owes Eckersley an apology.

Eck: A Story of Saving, shows a man who has seen it all, been honest about his ups and downs along the way, and has come through on the other side in one piece and somehow even cooler than he was at the beginning.  He appears to be in a good place in his life, which is all anyone can ask for at the end of the day.  The one major problem with the documentary is that it could easily have been another 30-60 minutes long, but otherwise, if you're a fan of Dennis Eckersley, you should make a point to check out this program. 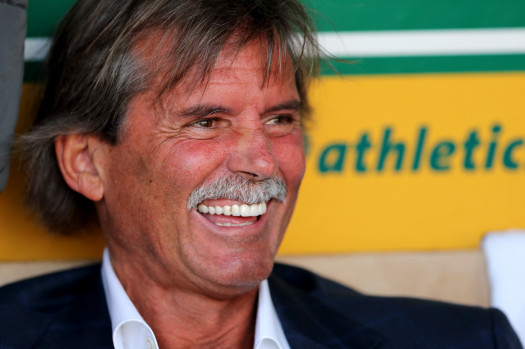 Eck is as cool as they get.  (pic via mercurynews.com)