Welcome back, and a merry Christmas Eve to you all.  We hope you've finished  your shopping by now, but good luck to everyone who is brave enough to venture into the stores today.  We're all set on that front, but I'm still feeling a little stressed.  I've got a number of non-Christmas errands to do, and with all of the running around for the holidays, it sort of feels like I need to do them all this morning, or else they won't get done this week, even though it's only Monday.  BDH and Little Buddha told me to take a deep breath and just focus on crossing off the items on the to-do list one at a time, so that's the goal, because they always know best.  The guys also said they have a fresh pot of coffee for everyone, so help yourself to a nice medium DD, and let's clear out some Clutter.

Apparently Donald Trump didn't bother to read the resignation letter from Defense Secretary Jim Mattis and didn't find out that it shredded him until he watched the news coverage hours later.  First off, that ties back into our long-standing suspicion that Trump at best, doesn't read "at a high level."  Second, there's nothing Trump hates more than bad news coverage, so once the talking heads told him that he once again looks like a fool, he decided to force Mattis to leave two months early.   In the battle of the Great Pumpkin's ego vs. national defense, ego wins every single time.  It must be exhausting to live each day with such a dominant inferiority complex. 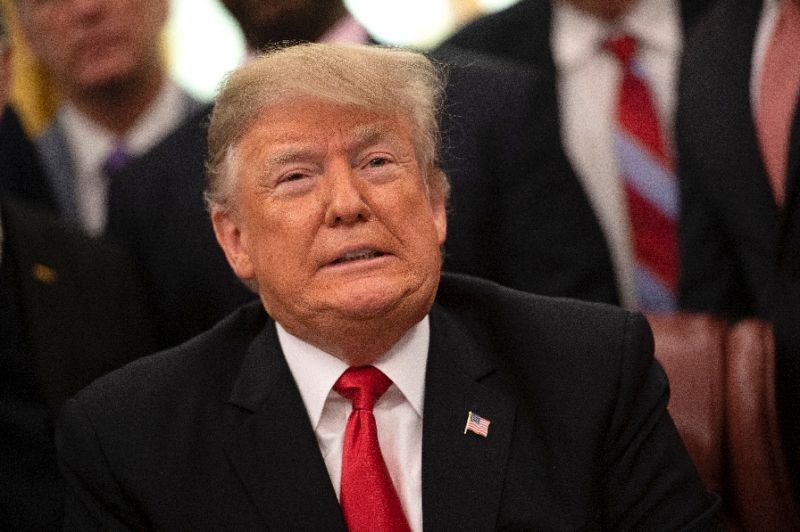 Another day, another tantrum.  (pic via philstar.com)

Treasury Secretary Steven Mnuchin spent his Sunday calling the heads of major banks telling them there was no reason to panic. It doesn't sound like any of the executives had any idea why Mnuchin gave them that message, which only leaves us feeling like he knows something the rest of us do not.  (Or maybe someone went a little heavy on the holiday eggnog.)  Now what we want for Christmas is for the stock market not to have a Trump-induced meltdown.  Does that feel like a huge ask?

We get the impression that Donald Trump would accept $1 in funding for his wall so that he could call it a win, and Democrats shouldn't give it to him.

A new study says there are three specific periods in your life when you're likely to feel the most lonely. There should be another study measuring how depressed reading study results can make you.

The good news is that the New England Patriots beat the Buffalo Bills 24-12 yesterday to clinch their 10th straight AFC East title.  That's a remarkable achievement.  Apart from the 14 consecutive years that the Atlanta Braves won the NL East, no other team can match this record of consistent success.  The less-than-great news is that the Patriots did it via the ground game (rushing for 273 yards on 47 carries), because they didn't seem to have a choice.

Tom Brady went 13 of 24 for just 126 yards with a touchdown and two interceptions on the day.  It was one of the least-inspiring wins of his career, and at the moment, there's no reason to be excited about any of his possible targets.  The Patriots play the New York Jets in the final game of the regular season next Sunday.  There are all sorts of playoff possibilities on the line, and after that, we'll see what happens in what feels like a particularly-open field, but we expect this team to look significantly different in 2019.

Speaking of playoff possibilities, the Kansas City Chiefs lost 38-31 to the Seattle Seahawks yesterday. If we've done our math right, a Kansas City loss to the Oakland Raiders, plus a New England win next week, would give the Patriots the #1 seed in the AFC and home field advantage throughout the playoffs.  Is that the most likely outcome?  No, but the way this season has gone, we wouldn't bet against it.

The Pittsburgh Steelers lost 31-28 to the New Orleans Saints yesterday, and now they're out of the playoffs unless they beat the Cincinnati Bengals and the Cleveland Browns beat the Baltimore Ravens next week.  The former is a possibility, but we don't see the latter happening.  What we do see is Steelers quarterback Ben Roethlisberger throwing his teammates under the bus at the first opportunity if the Steelers are eliminated from contention.

Fighter Jon Jones had a drug test issue, so the UFC is moving this week's PPV from Nevada to California? What an insane level of disruption for everyone associated with this event, from the fans to the other fighters, to accommodate one man.  Would the company go under if Jones wasn't on the card?

Hey Avengers fans, it looks like we know when Infinity War is coming to Netflix!

Okay kids, that's going to do it for now - gotta take care of those errands.  Let's have Stevie Nicks close things out with her cover of, "Silent Night," for today's, "Song of the Day."

Thanks for stopping by, everyone.  It was a treat to see you, as always.  Pretty sure we will be here for a bit tomorrow, so if you want to pop by, BDH and Little Buddah would love to hang out with you.  If that doesn't work, we wish you a merry Christmas, and we will reconnect again soon.  Until next time, that's today's Clearing out the Clutter, and we are outta here.