Welcome back for our last gathering of 2018!   Another year is in the books.  That's a little nuts.  BDH and Little Buddha are asking if they can stay up until midnight again.  I told them I think we'll all need a nap beforehand for that to happen, so that's something for us to look forward to this afternoon.

I can't say I'm "excited" for 2019 to arrive, maybe more along the lines of curious and a touch apprehensive.  The guys are constantly reminding me to take a deep breath and not worry too much about what's to come in the future.  That's probably about as close as I'll get to a New Year's resolution.  Theirs is to smile as much as possible...maybe I'll join them on that one instead.  Anyway, they say the coffee is ready, so help yourself to a nice medium DD, and let's clear out some Monday Clutter.

Donald Trump wants the government shutdown to last as long as possible because he thinks the more he rants about his border wall, the more it will distract House Democrats from investigating him in 2019.  Self-preservation is the only thing that matters to the Great Pumpkin, and he'll burn the country down if that what he thinks he needs to do to stay out of jail.  Thankfully, Nancy Pelosi is more than a match for Trump.

Keeping them from getting their paychecks now isn't enough, so Trump is also freezing federal workers' salaries next year, claiming that it's too much for the budget to handle.  He and his cronies gave away the house to the uber-rich with that tax cut earlier this year, but somehow everyone else is "too big a cost" to support.  That's the GOP in an nutshell.

Senator Lindsey Graham (R-SC) says he became Donald Trump's lapdog friend because Trump gives him more access than any of his predecessors in the White House.  What's a more believable explanation for their relationship:   Trump made a friend, or Trump has incriminating information on Graham?

Douglas Letter was named the new general counsel for the House of Representatives on Friday after a 40-year career at the Department of Justice.  That seems like something worth keeping an eye on in 2019.

Amazon is apparently expanding their Whole Foods empire. It's a touch hypocritical, because we are mildly addicted to their Sonoma chicken salad, but this expansion is really only good news for self-absorbed folks who feel like they're good citizens because they paid $7 for a can of tuna.  Maybe we'll just find the chicken salad recipe online.

The best thing that Wall Street can say about today is that it's the final day of an insane month.  It would be nice for January to be calmer, but with an increasingly-erratic criminal in the White House, we're not hopeful.

The New England Patriots thumped the New York Jets 38-3 yesterday to finish the season at 11-5 with the #2 seed in the AFC.  You can't put a lot of stock in the outcome, since the 4-12 Jets clearly wanted to go home as soon as possible, but hey, it's always nice to enter the playoffs on a positive note.   Tom Brady calmed some fans down by looking much better than he has over the last couple of weeks.  TB 12 went 24 of 33 for 250 yards with four touchdowns and no interceptions. Not bad for a 41-year-old quarterback. 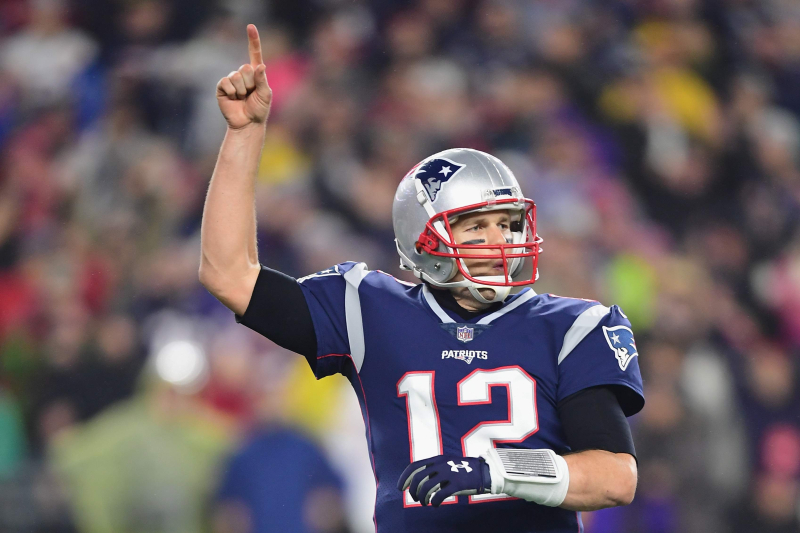 We're on to the playoffs.  (pic via w3livenews.com)

Wide receivers Chris Hogan and Philip Dorsett returned from the dead to combine for 11 catches for 98 yards and a touchdown.  If the Patriots are going to go far in January, they need both of these guys to step up as compliments to Julian Edelman and Rob Gronkowski.  Now the Patriots enjoy their ninth-straight first-round bye and wait to see who they'll face in two weeks.  Even with all of the challenges they've dealt with this year, they still delivered.  What an amazing run.

The New York Jets fired head coach Todd Bowles shortly after the loss to the Patriots on Sunday.  That might explain why Bowles looked like a guy who was thinking about what Christmas presents he had to exchange all afternoon.  The Jets were 24-40 under Bowles, but they've got something like $100 million to spend in the off-season, and rookie quarterback Sam Darnold seems like he's legit, so this could be a good gig for the next coach.

The Pittsburgh Steelers beat the Cincinnati Bengals 16-13 yesterday, but the Baltimore Ravens beat the Cleveland Browns  26-24, so Ben Roethlisberger and company are out of the playoffs for the first time in five years.  Pretty sure the NFL will survive that absence.  Again, if Pittsburgh's ownership wasn't so obsessed with how long they keep their coaches, it seems likely that Mike Tomlin would be on the hot seat.

Hey Chicago Med fans, are you ready for what sounds like a challenging second half of season 4?

We'll be sitting down post-nap to watch some Doctor Who on BBC America tonight, but we may also take an occasional look at Syfy's Twilight Zone marathon. Actually, that might sum up our plans for tomorrow as well.  If neither of those shows are your cup of tea, here are a few more viewing options.

You know, now that we think about it, we're starting to wonder if 2018 was one long Twilight Zone episode.

Okay kids, that's going to do it for now.  There's only one choice to close thing out for us on New Year's Eve.  Here's Europe with, "The Final Countdown," for today's, "Song of the Day."

Thanks for stopping by, everyone.  It was great to see you, as always.  We hope you all have a fantastic final day of the year.  For those of you crazy kids who will be out celebrating tonight, have fun and be safe.  We expect to see you all back here again for a new year of coffee, fun, and randomness.  Until next time, that's today's Clearing out the Clutter, and we are outta here.