Welcome back!  Come on in, have a seat.  How are you?  We were just listening to the plows doing their thing.  Fortunately, I got home last night just as the snow was starting to fall.  Nighttime driving in the snow is not one of my most favorite activities.  It doesn't seem like there's that much, so the shoveling should be fine.  However, let's check out today's headlines first.  BDH and Little Buddha made some coffee, so help yourself to a nice medium DD, because it's time to clear out some Monday Clutter.

Rudy Giuliani made the talk show rounds again yesterday.  He said that he'd let Robert Mueller interview Donald Trump "over my dead body," and no one seems to have a problem with that.  Between claiming that working with Russia to influence the 2016 presidential election isn't a crime because it was over before the election, and just generally making things up off the top of his head re: Michael Cohen, we're starting to wonder if Rudy already flipped on Trump and just hasn't gotten around to telling him yet.  With defense attorneys like this, who needs a special counsel? 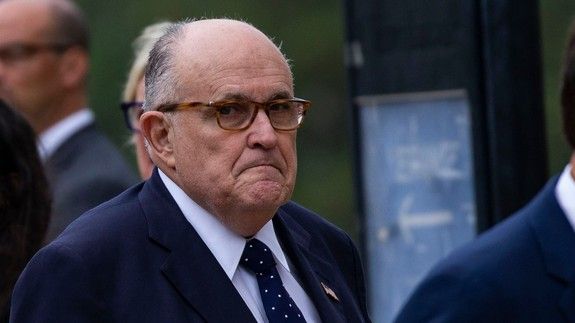 What are we doing here?  (pic via yahoo.com)

It's important to note that a new poll shows that a majority of the country thinks Trump is lying about Russia.

First Amendment be damned, Donald Trump wants the courts to order Saturday Night Live to stop making fun of him. It's funny how SNL has been mocking presidents since, oh, say, their first season in 1975, but the Great Pumpkin is the only one who thinks it should be illegal.  The inferiority complex is strong in that one.

Donald Trump is talking a big game about shutting down the government to get funding for his white whale, the border wall.  It's worth remembering what Trump said about presidents and shutdowns when Barack Obama was in the White House.

James Comey defended the FBI after Donald Trump claimed that the agency illegally broke into Michael Cohen's office.  Comey pointed out that the FBI executed a lawful search warrant, and Trump was lying about it.  Trump's tweet also referred to Cohen as a "rat," which immediately had Twitter discussing the fact that the White House occupant is speaking like a mob boss.

This story keeps making the rounds:  Is Robert Mueller in a secret court fight with someone, and if so, who is it?

It sounds like the opening of the recreational marijuana store in Salem, Massachusetts, went as smoothly as it could have last weekend.  Stores opening over the course of the next few months may want to adopt ATG's approach.

We have no problem believing that gardening may help you lead a longer life.  Our stress levels drop by 99% the second our feet hit the dirt.

The New England Patriots lost 17-10 to the Pittsburgh Steelers yesterday, thus falling to the #3 seed in the AFC (for now) with a 9-5 record.  It was the first time the team's lost consecutive games in December since 2002, and it's starting to look like this season will come to an early end.  Of course, anything is possible in the NFL.  Nothing about the game felt good.  The defense only gave up the 17 points, but when you allow 158 rushing yards, that's a lot of time taken off the clock, which makes things harder for the offense.

Speaking of the offense, Tom Brady was 25 of 36 for 279 yards, and one touchdown.  However, he also threw one of the worst interceptions of his career on a late fourth-quarter drive.  The team was sloppy (14 penalties and three dropped passes), and they looked unable to bounce back from last week's crushing Miami loss.  They've got the Buffalo Bills at home next Sunday, which will hopefully help, but things are not looking good for this roster.

Glad to hear that Washington Redskins quarterback Alex Smith is finally out of the hospital after fracturing his right fibula and tibula on November 18.  Smith's been dealing with an infection after multiple surgeries on his leg, and while the future of his career is still in doubt, it's nice that he'll be home for Christmas.

If you haven't already seen it, this story about Charles Barkley's friendship with a man named Lin Wang is worth your time.

Okay kids, that's going to do it for now.  The guys want to pick something off our Christmas playlist to close things out here.  Let's go with Lemmy Kilmister (Motorhead), Dave Grohl (Foo Fighters) and Billy Gibbons (ZZ Top) to close thing out with their cover of, "Run Rudolph Run," for today's, "Song of the Day."

Thanks for stopping by, everyone.  It was a treat to see you, as always.  Enjoy the rest of the day, be careful if you're driving on slippery roads, and we'll catch up with you again for more caffeine soon.  Until next time, that's today's Clearing out the Clutter, and we are outta here.