Welcome back, and a happy Friday to you all.  Wait, happy first day of winter!  We're going to celebrate with a heavy rainstorm that could possibly knock out our power.  On the other hand, the sunlight starts increasing after today, so that's a fair trade-off.  Sorry we were gone yesterday.  Everyone at Clutter Headquarters gets a little antsy when we don't get to hang out with you.  We try to keep schedule disruptions to a minimum, but there may be a couple of additional misses between now and January 2nd, with holiday travel and all that.  Anyway, let's check out today's headlines.  BDH and Little Buddha made some coffee, so help yourself to a nice medium DD, because it's time to clear out some Clutter.

Defense Secretary James Mattis resigned yesterday, much to the surprise of everyone.  His decision came after Donald Trump ordered the withdrawal of troops from Syria earlier in the week and is now also reportedly preparing to reduce the US military's presence in Afghanistan.   There's no disagreement here on either decision, but they both came across as erratic spur-of-the-moment calls that were based more on Trump's desire to move the narrative away from his collapsing presidency, and apparently Mattis had enough.   Mattis was described by many as one of the more grounding influences on Trump.  That's a relative label, but his departure (effective in February 2019) leaves this administration seeming even more untethered to reality, which is a daunting idea. 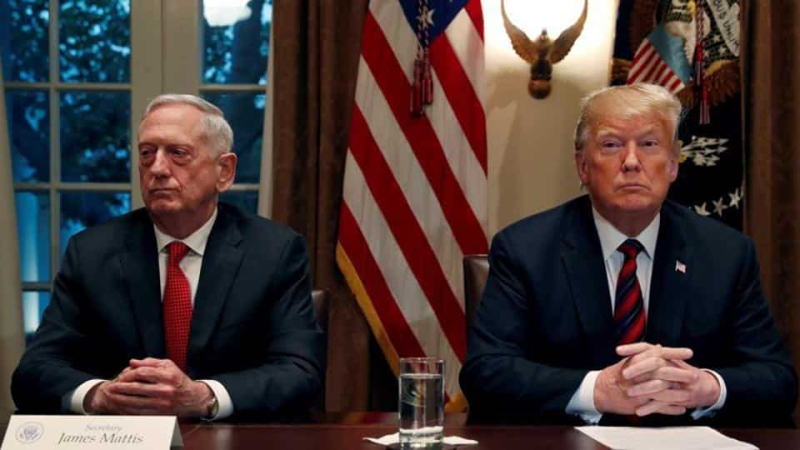 Defense Secretary Mattis has had enough.  (pic via hindustantimes.com)

Senate Majority Leader Mitch McConnell (R-Kentucky) said he was "distressed" by Mattis's announcement. That's the strongest negative language we've seen McConnell direct towards Trump.  Is it the start of a growing crack in the GOP's support of the Great Pumpkin?

The U.S. House passed a temporary budget bill which includes $5 billion for Trump's border wall. That's at odds with the Senate version, so perhaps we will be looking a government shutdown tomorrow after all.

Acting Attorney General Matt Whitaker reportedly ignored a recommendation to recuse himself from overseeing Robert Mueller's investigation due to his previous criticisms of Mueller's work.  Much like Brett Kavanaugh on the Supreme Court, Whitaker is only in this role to protect Donald Trump.

Yesterday was yet another bad day on Wall Street. The Dow Jones dropped 2%, the S&P 500 fell 1.6%, and the Nasdaq also fell 1.6%, which put it just short of its first bear market since the Great Depression.

In short, we've got chaos on all fronts, with little sign of it slowing down soon, thanks to a panicked and criminal administration.

Congratulations to Representative Jim McGovern (D-Massachusetts) on formally being named the-incoming chairman of the House Rules Committee, which means he's in charge of deciding what bills make it to the House Floor.

Eliza Dushku's recent piece in the Boston Globe about what happened to her on the set of Bull is a must-read.  Cheers to the actress for having the courage to speak out publicly about the harassment she faced from the show's star Michael Weatherly.  As recent stories have demonstrated, CBS has no idea how to handle these situations.  This particular story is disappointing on a personal level, because Weatherly was a favorite of Mom Clutter's when he was on NCIS, which was one of her favorite shows, and she would have been disgusted about his behavior.

Glad to hear that the Toucher and Rich show isn't going anywhere after the hosts signed a new contract.  We used to enjoy watching the program's simulcast, and that ended earlier this year, but now you can watch them on Twitch.

We're sorry that New England Patriots wide receiver Josh Gordon has been suspended indefinitely by the NFL for another violation of the league's substance abuse policy.  It's Gordon's fourth violation, and some will say this was not a question of "if," but "when," but it's clear that he is battling much larger issues than football.  Gordon announced before the news of the suspension came out that he would be stepping back from football to focus on his mental health, and we hope he gets the help he needs.  On a much more superficial level, we also hope the Patriots quickly figure out who will be his replacement.  Gordon may not have been the key factor for New England's success for the rest of the year, but his departure leaves an absence the team can't afford.

Oakland Raiders coach Jon Gruden says the newly-signed Nathan Peterman has "a good chance" of sticking with the team, so that tells you all you need to know about this group's prospects for success anytime soon.

The first trailer has dropped for Men In Black International.  It looks like it could be interesting, but right now, the problem is that every time Liam Neeson speaks, we expect him to give his Ransom speech:

Okay kids, that's going to do it for now.  Let's close out the week with the Pogues and Kirsty MacColl performing, "Fairytale of New York, " for today's, "Song of the Day."

Thanks for stopping by, everyone.  It's always a treat to hang out with you.  Enjoy the rest of your day, stay dry, and we'll see you back here again for more fun soon.  Until next time, that's today's Clearing out the Clutter, and we are outta here.