Welcome back!  Come on in, make yourselves comfortable.  How are you?  We were just talking about how crazy it is that the year's almost over.  In some ways, it feels like it's been 2018 forever, and in others, it seems like the whole thing went by in a flash.  (Speaking of which, don't forget to check out this year's "Best of Clutter," and let us know what you think!)  I asked BDH and Little Buddha if they want to do resolutions for 2019.  They said they'd think about it and get back to me.  Fair enough.  In the meantime, they made you some coffee, so help yourself to a nice medium DD, and let's clear out some Friday Clutter.

A new Gallup poll says Barack Obama and Michelle Obama are the most admired man and woman in the country.  This is the 11th straight year the former president has taken the top spot, and given the current state of affairs in the United States, we don't see him losing that title soon. 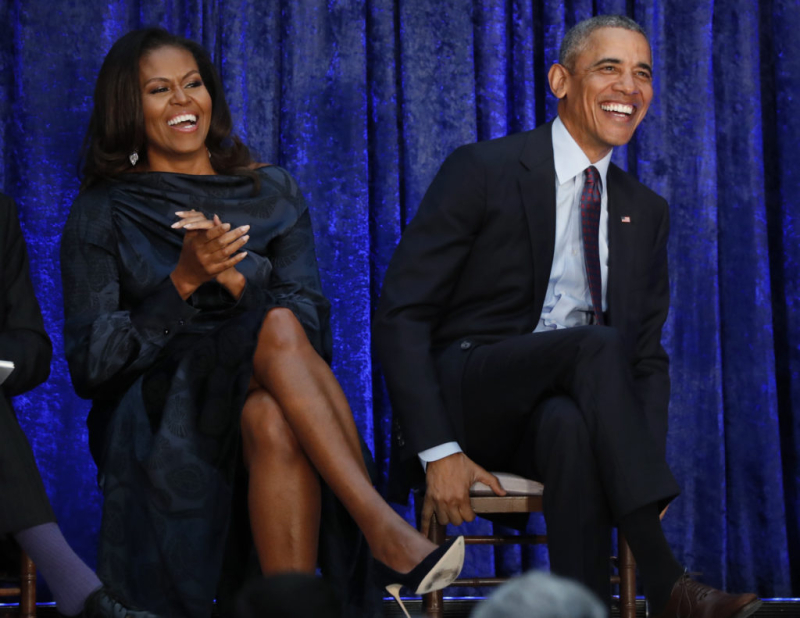 Congratulations to the most admired couple in America.  (pic via pbs.org)

Democrats take back the House on January 3, and they are apparently working on a plan to reopen the government while not paying for Donald Trump's border wall.  It will be such a boon to this country to have at least one legislative chamber that doesn't roll over for the Great Pumpkin.

Meanwhile, the latest bit of nonsense to fly out of Donald Trump's mouth is his claim that most of the government workers not being paid because of the shutdown are Democrats. Does he have any evidence to back that up?  We all know the answer to that one.  These are public servants who are being thrown under the bus because Trump needs a scapegoat.  This is a man frantically throwing everything at the wall in hopes of finding something that will stick and distract the country from his continuing free-fall.

Donald Trump was finally shamed into visiting the troops in a combat zone on December 26.  When he wasn't busy blowing the cover of Seal Team 5, he was lying to them about pay raises.  Are we tired of all of the winning yet?

One of the biggest supposed weaknesses of the "Steele Dossier" regarding the Trump - Russia connection was that there was little to no evidence to support one of the biggest claims: Former Trump fixer Michael Cohen made a trip to Prague in August 2016 to meet with Russian officials regarding election interference.  Well, that evidence appears to have been found, although Michael Cohen still claims he's never been to Prague.  Either he's still lying, or these reporters have been tricked.

It's been revealed that Robert Mueller's investigators apparently have a nude selfie of someone for some undisclosed reason.  No idea who is in the picture, but we all know who we're thinking.

There was a strange blue light over New York City last night. Officials say it was the result of an exploding transformer at a Con Ed power plant in Queens, but we all know they're just covering up for the alien invasion.

Public health officials say flu activity is high in Massachusetts this year, so go get your shot.

New England Patriots tight end Rob Gronkowski says he's only focused on finishing the rest of this season.  This has been a challenging year from start to finish for Gronk, and if we had to bet today, we'd say this will be it for him, but we'd be happy to be wrong about it.

Billie Lourd paid a sweet tribute to her mom Carrie Fisher yesterday on the second anniversary of Fisher's death.  In honor of the late Princess Leia, here's a look back at some of her best Star Wars moments.

The rumors are building about the idea of a Van Halen tour in 2019 that would feature the band's original line-up.  However, former bassist Michael Anthony says he hasn't talked to anyone in the group since 2004. That doesn't doesn't necessarily settle anything, since his management could talk to VH's management to work this out.  Part of would like to see him back in the fold for at least one last run, but the bigger concern is keeping David Lee Roth as the singer.  As we've written before, the last time we saw these guys live, everyone named "Van Halen" sounded great, but DLR was not at his best, and it's hard to imagine he's gotten better since then.

Okay kids, that's going to do it for now.  We just finished a book that reminded us of a certain tune which has a certain "end of year" vibe to it, so here's Journey to close things out with, "Don't Stop Believin'," for today's, "Song of the Day."

Thanks for stopping by, everyone.  It was great to see you, as always.  Enjoy the rest of your day, be good, and we'll meet back here again for more fun soon.  Until next time, that's today's Clearing out the Clutter, and we are outta here.