Donald Trump's Next Chief of Staff is a Real American

Don't ask how, but we managed to secure a transcript of Donald Trump's press conference to announce who will replace General Kelly as his chief of staff in January.

Donald Trump: I know a lot of people have been talking about who is going to be my next chief of staff. Some members of the media claim I can't find anyone to take the job, and that even the White House janitor and the McDonald's cashier turned me down yesterday. That's fake news designed to embarrass me.

I only hire the best people, besides everyone who has been indicted/convicted or flipped on me. I have the best brain, which gives me the best words to introduce myself to people who want to Make America Great again. I'm not talking about people like Nasty Nancy and Crazy Chuck who think they can embarrass me with their "facts" while Mike Pence sits by staring at his hands.

(Pence was totally not my idea, by the way. People tell me he calls his wife "Mother" like he's 120 years old, and he's never in a room with a woman by himself, but we'll save that for another time. That's just what I hear.)

I've had thousands, make that, millions, of people beg me to hire them to make sure the White House runs as smoothly as my casinos, hotels, airlines, steak business, and that football team I had that one year. I went through all of the resumes/had Ivanka read them to me, and one name popped out.
There's one man who tells the truth as often as I do, who gets along with African-Americans as well as I do, and who can help me fight this witch-hunt. I need someone who has as much real world experience as I do and who is preferably as orange as I am. There's only one Real American who fits the bill. He's a Hall of Famer, just like me, so my next chief of staff will be:

He's just as tough on Russia as I am, and he'd like to say a few words.

Hulk Hogan: Well, let me tell you something, Dapper Don. It's a thrill to be here, brother. I was just sitting at home, hanging and banging, eating my vitamins, taking a nap, and waiting for the WWE to call me and let me get back on TV again, but this is even better, brother. I'm not scared of Russia. I fought Nikolai Volkoff back in the 1980's, and if he couldn't beat me, Robert Mueller's got no chance, dude. I also beat the Iron Sheik for the title in 1984, so I already have as much experience with the Middle East as the Donald, brother.

I'm the guy who picked up the 900 lb Andre the Giant over my head, and body-slammed him to the ground in front of a live audience of 8 million people at Wrestlemania 3, tearing every muscle in my body from head to toe in the process, but I still came out on top. You think I'm going to be afraid of an impeachment process? That Nancy Pelosi is no match for my 14-inch pythons. I'll fight her in a steel cage match anytime, and with Rudy Giuliani as my manager, I'll be the next WWE Heavyweight Champion, because whatch ya goin' to do when Hulkamania runs wild on you?

Hulk begins to pose, re-injures his replacement hip, crumples to the ground and is eventually carried away on a stretcher by medics.

Trump watches Hogan get carried off, pauses, and says, "Maybe I should call Kid Rock again." 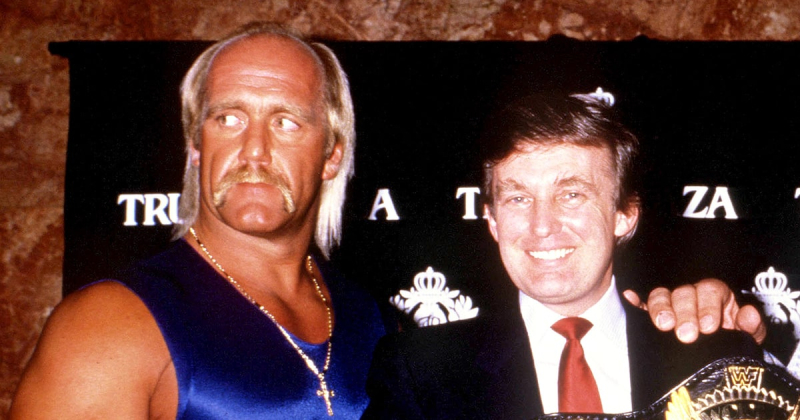 How could it be worse?  (pic via reddit.com)