Bob Woodward's latest book, Fear: Trump in the White House, has been all over the news for the last few weeks, and with good reason.  The veteran political reporter provides a harrowing look into the inner workings of Donald Trump's administration, and it's alarming.  It's not that the book reveals another side of Trump, it's that it demonstrates his known failings are even more extensive and dangerous than have been reported.  Fear shows that the biggest daily task his staff and cabinet face is not carrying out his agenda (not that he has a defined one in the first place.)  It's to keep his most threatening, ill-informed, poorly-reasoned, and temperamental impulses in check as much as possible.

As usual, Woodward brings the reader behind the scenes at a high level.  There are accounts of many conversations involving key players like ex-chief of staff Reince Priebus, former strategist Steve Bannon, former White House staff secretary Rob Porter, Pentagon leaders, cabinet officials, Trump's former lawyer, and more.  Woodward shows time and time again how all of them ran up against a man who clearly had no idea he would actually become president, put no work into learning about the job beforehand, and hasn't done any since.  Trump's ignorance about all levels of government is astounding.  It's hard to tell how much of his imperial demands are from a man with any kind of predetermined plan, and how much of it is because he literally doesn't understand that being president is not the same as being a king.  To take a slight spin on a familiar quote, he's an entitled man who was born on third, thinks he hit a triple and also screams to everyone within shouting distance that he should be a Hall of Famer for it.

Bannon sums up Trump's approach to the presidency, as well as life in general, in a discussion with General H.R. McMaster:

(Trump) doesn't like professors.  He doesn't like intellectuals.  Trump was a guy who "never went to class.  Never got the syllabus.  Never took a note.  Never went to a lecture.  The night before the final, he comes in at midnight from the fraternity house, puts on a pot of coffee, takes your notes, memorizes as much as he can, walks in at 8 in the morning and gets a C.  And that's good enough.  He's going to be a billionaire."

It is jaw-dropping how many stories appear about experts in their fields trying to explain basic concepts to Trump, and his reaction consistently can be summed up as him saying, "That's bullshit!  Do what I said!"  One can easily picture him putting his fingers in his ears as he says it.  Domestic policy or foreign, Trump seems to be making up the entire thing as he goes along, and it's up to others to pull him back in as much as they can, whenever possible.  However, even they seem as floored as the public when Trump pulls an impromptu stunt like accusing "both sides" in the Charlottesville rally of bad behavior.  He also appears to be a man with the attention span of a gnat, as there are countless stories of his inner circle keeping/taking papers off his desk in hopes that he would forget about his worst ideas for at least a little while.

It's an access that few others in Washington can provide.  Woodward clearly did his research, but it's also important to remember that he's not a historian, and this is not a history book, it's a political tale.  There's some amount of spin in Fear.  It's a long-standing truth that people in Washington talk to Woodward in part because it gives them the opportunity to tell their side of the story for the record and perhaps also settle scores with enemies.  He won't name his sources, but you can take a educated guess at who talked about a given event based on who looks good in that chapter, and who gets attacked.  It's also clear that Trump did not talk to him, because in some ways, he's the least-defined figure, and his quotes are the most simplistic ones in the book.  This is not to say that any of this is fiction, just a reminder to consider the competing agendas as you read it.

Fear is appropriately titled.  It is clear that the current occupant of the White House doesn't care about reality, embraces his stunning lack of intellectual drive, and thinks he can "wing it," because that's what he's done his entire life.   This is as harrowing a tale as you will read this year. 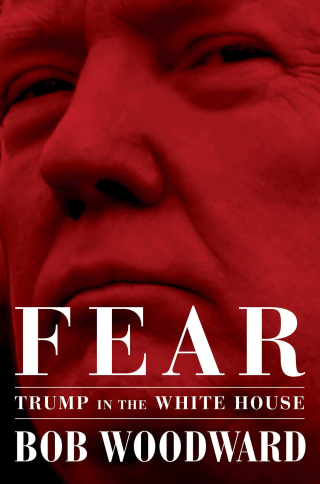 It's even worse than you think.  (pic via amazon.com)