Check out the 13th Doctor in the new Series 11 Trailer!

The Doctor is coming!

First we had the quick teaser clip, and now the BBC has released the first proper trailer for Jodie Whittaker's debut as the 13th Doctor.  What a great time to be a Doctor Who fan!

Let's take a look and see what we've got here:

A 40-second trailer can certainly be misleading, but the obvious theme for this year is, "Everything is new here, so come join us."  Besides that, our sense is that this reset is going to include the addition of more humor back into the show.  We loved Peter Capaldi's Doctor, especially in Series 9, which is one of the greatest things we've ever seen on television.  He was a terrific change of pace from his immediate predecessors (whom we also thought were fantastic), but it's time to bring that sense of joy back to the program.

The audio sounds like it's taken from right after 13's regeneration, and we can't wait to see how Whittaker makes the switch from that initial period of craziness into becoming "her" Doctor.

One can't help noticing the absence of the TARDIS again, which smarts a bit.  (Although we did catch a quick glimpse of a new sonic screwdriver!)   Perhaps the Internet rumors are true that the blue box will be gone for most of this series.  Could it be that Whittaker's first introductory video was in fact a clip of her finally being reunited with her closest ally?  Guess we'll have to wait and see.

On the one hand, we're in no hurry for summer to end.  On the other hand, we can not wait to see #13 and her new friends in action in a few months.  It's going to be brilliant! 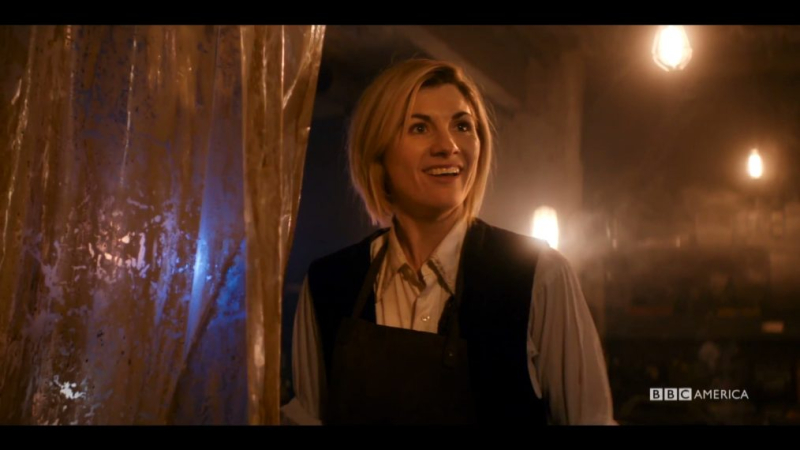 The excitement continues to build!  (pic via tvinsider.com)