I realized after his recent death that I've never read any of Anthony Bourdain's books.  The late chef/TV host was a captivating presence any time I'd seen him on television, but not being a "foodee" per se, I'd assumed these books would not be for me.  However, it's always good to challenge assumptions, so I went to the local library and checked out Medium Raw:  A Bloody Valentine to the World of Food and the People Who Cook.

Published in 2010, Medium Raw is the follow-up to Kitchen Confidential, the book which launched Bourdain into super-stardom.  It's a collection of engrossing essays that combine the author's troubled personal history, tales of all sorts of fantastic dishes which he enjoyed while traveling around the world, and his opinions about the trends and people who dominated the culinary scene at the time Medium Raw was written. 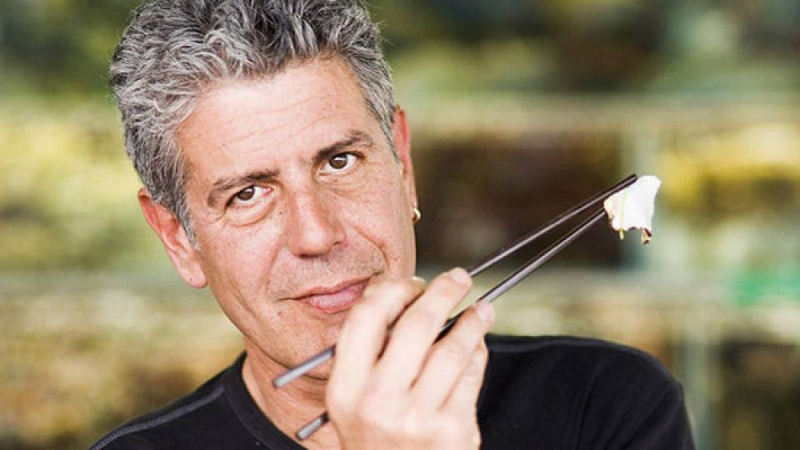 Anthony Bourdain the author was as engaging as the TV personality.  (pic via theglobeandmail.com)

It's easy to say now, given his recent death, but Bourdain's suicide is telegraphed in Medium Raw.  Some of it is blatant, as he describes past suicidal thoughts and actions following his first divorce.  Some of it is more subtle than that, but it's easy to see he was troubled, as he discusses his past drug addictions, shreds himself for the poor professional decisions he made as a chef, and seems largely unconvinced that he "deserves" the fame and life that Kitchen Confidential provided him.  He was clearly battling some demons, and it's particularly hard to read the chapter about his love for his daughter.

As far as the specific food he describes?  Again, not being a passionate food fan, I might have recognized 30% of the dishes Bourdain writes about, but even so, they all sound amazing.  If you know what the other 70% of them are, you will probably be starving after reading the first couple of chapters.   The man clearly had a way with "food porn," even as he struggled with the impact that genre might have on the culinary profession.  His love for travel and respect of other cultures pours out of Medium Raw, which is no surprise, given the tremendous television programs he hosted on the same subject.

As the book title suggests, Bourdain loved, "the world of food and the people who cook." He did a beautiful job of showing that world to his readers.  There's a story about a man who cuts fish for a restaurant which is one of the most interesting things I've read all year.  Bourdain also writes about who he hated and who he loved at the time.  Again, even not knowing who most of the people were, I couldn't wait to learn about the next "hero" or "villain."  There are also larger themes throughout Medium Raw which include the aforementioned love of travel, but also discussion of people who have a fanatical devotion to perfection, or an eagerness to push boundaries, and how that can pay off beautifully or be a disaster.  Of course, there's also some thoughts about critics who are eager to tear all of this hard work down at the first opportunity.

Medium Raw was a wonderful read, and it makes Bourdain's absence that much more difficult.  The world lost a terrific storyteller, but at least he left such a terrific legacy behind.  You don't have to be a fan when you start this book, but you will be one by the time you finish it.