Welcome back!  It seems like we were just griping about some late snow, and now temperatures are supposed to be in the high 80's today!  Don't forget to wear your sunscreen and drink plenty of water, because apparently we're going straight into summer.  Well, cold temperatures, warm temperatures, all I know is that either way, we've got coffee.  BDH and Little Buddha say it's ready to go, so help yourself to a nice medium DD, and let's clear out some Wednesday Clutter.

Will Robert Mueller issue a subpoena to force Donald Trump to testify in the Russia probe?  It's hard to imagine how else they'd get the Great Pumpkin to speak, because as we've said before, there's no way he'd make it through the first five minutes without lying under oath.  There's some question about whether Trump's team would fight said subpoena all the way to the Supreme Court.  Maybe he'd win that challenge, but it would just add to the GOP's problems this fall.  Not that Trump cares about anyone but himself, of course, but a Democratic House should speed up the impeachment process.

Meanwhile, Trump's former doctor says Trump wrote that letter in 2015 which proclaimed him "the healthiest individual ever elected to the presidency," and Harold Bornstein also said that Trump's goons "raided" his office and stole Trump's files last year.  Can't say we're surprised by the first part, but what kind of self-respecting physician would take part in such an egregious sham?  As far as the files go, what's Little D lying about this time?

Nancy Pelosi says she's not going anywhere, even though some Democrats have argued it's time for a leadership change.   We still think a possible Pelosi presidency is on the table for 2019-2020.  The Democrats regain the House, Pelosi is elected Speaker, and both Trump and Mike Pence fall as a result of the Russia investigation.  Voila - President Pelosi.  Can you imagine the collective meltdown that would trigger for conservatives? 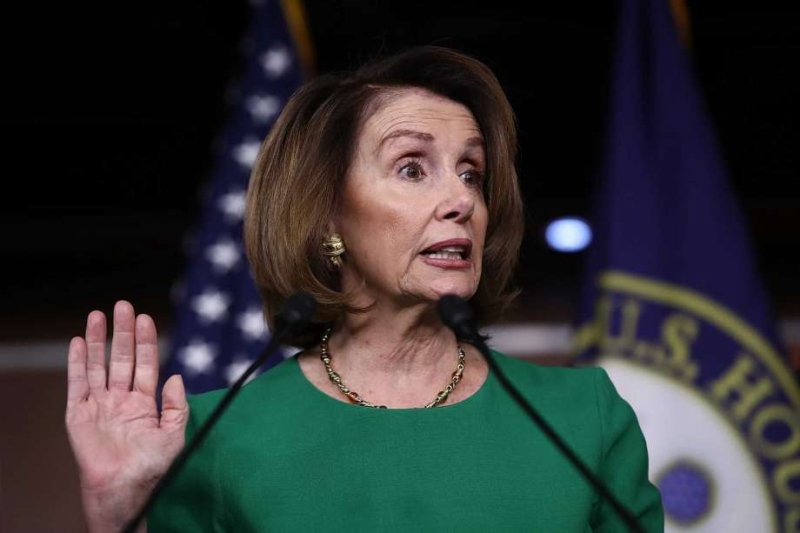 Nancy Pelosi isn't backing down from Republicans or Democrats.  (pic via chron.com)

NBC News is going all-in on defending Tom Brokaw from recent sexual harassment accusations.   A letter supporting Brokaw was signed by over 100 women, with one (unnamed) signee saying, "Everyone is afraid to say that this is not black and white. My hope is this is the moment that defuses #MeToo. And the silver lining is that it took someone like Tom."  NBC is taking heat for the letter now, but just wait to see the reaction if additional women step forward.

It looks like WWE star Glenn "Kane" Jacobs won the GOP primary for mayor in Knox County, Tennessee.  Jacobs beat his top rival by 17 votes yesterday, so we'll see if that holds up.  Jacobs ran as a conservative, and we're guessing he won't choke-slam any opponents if he ends up winning the office, but maybe it's best not to make assumptions.

Would you trust Facebook with your love life?  That's a pass on this end, but best of luck to anyone who uses their new dating service.  Just make sure you don't end up sending money to a new girlfriend in Russia.

A new study says drinking alcohol might be much worse for you than previous reports have indicated.  The research indicated that men shouldn't drink more than an average of a beer a day, which is half the current standard recommendation. Also, did you know that the World Health Organization labeled alcohol as a carcinogen 30 years ago?  We don't like it anymore than you do, but our focus remains on helping you stay healthy so you can hang out with use for many more years to come!

The Boston Red Sox lost 7-6 to the Kansas City Royals in 13 innings last night.  It was a sloppy game, as the Sox made four errors before the night was over.  Chris Sale did his part, giving up just 2 runs over seven innings.  However, it was a rare off night for the Boston bullpen, as Craig Kimbrel gave up a game-tying home run in the 9th, and Brian Johnson surrendered a three-run shot in the 13th for the loss.  Given how poorly the Sox played in the field, perhaps it's surprising the game lasted as long as it did.  Drew Pomeranz takes the mound for the series finale this afternoon, and given how bad his last outing was, a lot of eyes will be on the left-hander to see if he's healthy.

Once we see The Avengers: Infinity War, that will probably be it for us for Marvel Comic movies for a little while, but we might check out Ant-Man and the Wasp when it comes out on Netflix.  How about you?

Thanks for stopping by, everyone.  Hanging out with you is always a treat.  Enjoy the rest of your day, stay cool, and we'll meet up again for more fun soon.  Until next time, that's today's Clearing out the Clutter, and we are outta here.