Welcome back!  Happy May 1 to you all.  That April was rough, man.  Don't know about you, but I'm looking forward to finally being able to turn off the heat, wear shorts, and resume the regular bike rides.  With all of the other craziness happening in the world these days, at least let us be able to enjoy better weather.  The birds are chirping this morning - they're on the same page.  Celebrating the start of the next/best third of the year calls for some coffee.  BDH and Little Buddha just made a pot, so help yourself to a nice medium DD, and let's clear out some Tuesday Clutter.

The New York Times published a list of the questions that Robert Mueller reportedly wants to ask Donald Trump.  We stand by our original prediction that the Great Pumpkin would be lying before he finished his first answer.  There are many questions about Michael Flynn, Jeff Sessions, James Comey, and possible coordination between Russia and the Trump presidential campaign in 2016.  It's beyond the realm of possibility to imagine Trump keeping his stories straight and remaining honest for that long.  We expect to see Trump's allies on TV this week urging him not to agree to an interview, because there's no way he'd make it out in one piece. 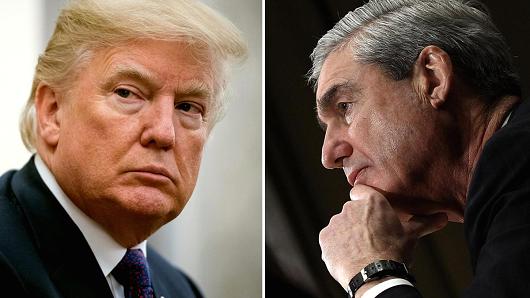 Robert Mueller has questions - does Donald Trump have any honest answers?  (pic via cnbc.com)

The National Enquirer is going after Michael Cohen.  Looks like Trump is cutting ties with his longtime fixer in anticipation of whatever information Cohen is giving Robert Mueller.

Meanwhile, Stormy Daniels is now suing Donald Trump for defamation, after he mocked her comments about a man who reportedly threatened her to keep quiet about their affair in 2011. Much like the Mueller investigation, we assume Trump's team will be pulling out all of the stops to keep him from having to speak about anything under oath.

The White House reportedly knew there were concerns about Dr. Ronny Jackson as long ago as last September, but they still pushed him to lead the Department of Veterans Affairs.  We remember the good old days when people were vetted before they were nominated.  It was a simpler world back then.  It's now gotten to the point where it's suspicious if there aren't allegations against Trump's choices for any position.

The cost of gas is expected to rise further this summer.  On the one hand, that's a painful expense for consumers.  On the other hand, if high prices push people to use public transportation or buy more fuel-efficient cars, that's a win for the environment.

We've never been a fan of meetings, and Amazon CEO Jeff Bezos' "two pizza rule" makes sense to us.  What do you think?

Deep breath, New England Patriots fans:  Tom Brady confirmed that he'll play in 2018.  Hopefully that will quiet down the current chapter of this soap opera, but the clock is still ticking on this dynasty.  The 40-year-old quarterback may still want to play for a few more years, and if he can, great.  However, the odds are against it.  Of course, there's nothing #12 loves more than proving people wrong.

The Boston Red Sox beat the Kansas City Royals 10-6 last night.  It was Boston's 19th win in April, which is a new team record, and they enter May with a record of 21-7.  Not bad.  Not bad at all.  Eduardo Rodriguez didn't have a good night.  He walked three, hit a batter, and gave up three runs all in the first inning and allowed a total of five runs over five innings.  However, the Sox battled back, with the highlight being Xander Bogaerts launching his second grand slam of the year, and the team's 6th so far in 2018.  (Did we mention the Sox are off to a good start?)  The bullpen once again took care of business, and that's all she wrote.  Chris Sale takes the mound for Boston against Kansas City tonight.

The Boston Celtics beat the Philadelphia 76ers 117 - 101 in Game 1 of their semifinals playoff series.  Boston-Philadelphia was a huge rivalry back when we were little, and it would be fun to see it rekindled with these two young teams.

The Tampa Bay Lightning beat the Boston Bruins 4-2 to tie their playoff series at one game apiece.  That's okay, the B's already stole one game on the road.  They did what they needed to do, and now it's time to take care of business at home.

John Mulaney has a new comedy special out on Netflix today.  We may have to check that out.

We have the reason why Fleetwood Mac fired Lindsey Buckingham earlier this year. Pretty straightforward, really.

OMG, 'NSYNC reunited yesterday!  (squeal)  The band members gathered to accept their star on the Hollywood Walk of Fame.

Okay kids, that's going to do it for now.  We've been debating this for a few minutes now.  We were about to have 'NSYNC close things out here, but we took a vote and unanimously voted against that, so instead, here's the Barenaked Ladies with, "One Week," for today's, "Song of the Day."

Thanks for stopping by, everyone.  It was great to see you, as always.  Enjoy the first day of May, be good, and we'll meet back here again for more fun soon.  Until next time, that's today's Clearing out the Clutter, and we are outta here.